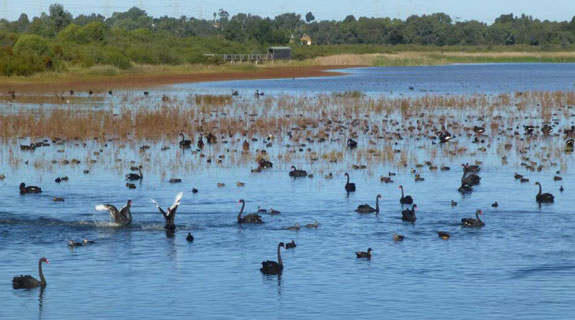 As well as having significant Aboriginal heritage, the Beeliar wetlands are an important breeding area for local fauna. Photo: Gillian Pitt

The state government is facing a fresh legal challenge to its contentious Roe Highway stage 8 extension, this time over Aboriginal heritage approval.

Traditional owner Corina Abraham has launched Supreme Court action against the state government, challenging the process by which Aboriginal heritage approval was granted to build the road over registered significant sites at Bibra Lake and North Lake.

According to legend, the wetlands were formed by the dreamtime serpent, the Waugal, making the area one of the most sacred indigenous sites within the Perth metropolitan area.

In 2013, the state government’s Aboriginal Cultural Materials Committee recommended Main Roads Western Australia’s application to disturb the sites to allow for the highway extension be rejected.

However, it reconsidered the application in June 2015, recommending it to be approved.

At the time, Aboriginal Affairs Minister Peter Collier said new information regarding the archaeological heritage of the site had been received, allowing for the reconsideration.

Ms MacLaren said the new challenge should be the “nail in the coffin” for Roe 8.

Last year, the Environmental Protection Authority’s approval of the road was overturned by the Supreme Court of Western Australia, on the grounds that the EPA did not follow its own processes in issuing its tick.

An appeal is being prepared by the state government against that ruling, while the EPA is also re-evaluating the project, a process expected to take around 12 months.

The extension of Roe 8 is part of the state government’s wider $1.6 billion Perth Freight Link, an infrastructure program designed to remove up to 5,000 trucks per day from other roads servicing the Fremantle port.