With a record run of construction coming to a close, commercial developers are facing an uncertain few years in Perth’s CBD. Click through to find the special report, which also looks at Perth's biggest landlords, place making, suburban office markets and a green technology company. 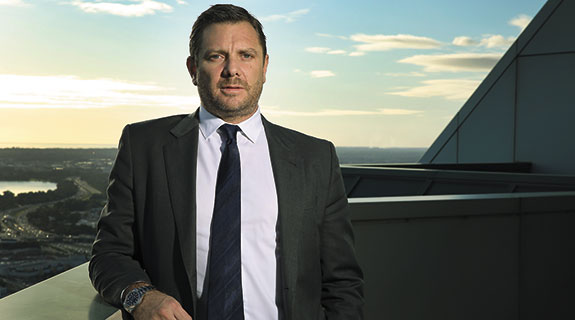 With a record run of construction coming to a close, commercial developers are facing an uncertain few years in Perth’s CBD.

Click here to see our focus on place making, suburban office markets and a green technology company in our Special Report.

One by one, the cranes that changed the face of Perth are disappearing from the skyline.

Coinciding with a slowdown of economic activity, most harshly felt in the resources sector, construction activity in the city centre is grinding to a halt.

And once 2015 comes to a close, just two office-building construction sites will remain, as the vast bulk of projects near completion.

However, that’s not necessarily a bad thing, according to market analyst Damian Stone, from Y Research.

Mr Stone said the slowdown of construction was just a natural part of the cycle and, for a city coming off such a large peak, was inevitable.

“Since the resources boom, across the city, West Perth and the suburbs, we’ve added the equivalent of 12 Brookfield towers,” Mr Stone told Business News.

“Over 800,000 square metres of space has been added since the first resources boom.

“And that doesn’t include the stuff that’s finishing this year. If you put that in, we’re closer to 14 Brookfield Places.

“We’ve had a record run for construction, and there is going to be a pause as the city adjusts to new supply conditions.”

That supply has resulted in a rapid spike in Perth’s office vacancy rate, with a further rise expected.

At Kings Square, an entire 23,000sqm office tower, KS1, is still without a tenant, as it rapidly approaches completion.

Malaysian developer AAIG’s Capital Square project is also expected to contribute to the rising vacancy, with Woodside Petroleum’s move to its tower expected to leave a significant amount of empty space in the Woodside Plaza, owned by Dexus.

The latest data from JLL has put the current vacancy rate in Perth at 17.4 per cent, the highest since 1999.

And depending on which market watcher you believe, office vacancies are expected to rise to between 20 per cent and 25 per cent before the end of 2018.

While acknowledging things had slowed significantly in the resources sector, particularly in the engineering and construction space, he said there was still a lot of activity happening in Western Australia to underpin office demand.

The vacancy spike, Mr Williams said, was due to a combination of that slowdown with the vast amount of supply that had either hit the market in the past few years, or was about to before the end of 2015.

“There is still economic activity here,” he said. “WA still has $115 billion committed to infrastructure and resources projects, and that’s still 50 per cent of what’s happening in all of Australia; the last time I looked we (WA) were still contributing more than 30 per cent of the (national) GDP.

“While we’ve come off a very high level of activity, we’re still doing pretty good when you look at the underlying fundamentals.

“That position has been lost on a lot of the eastern states observers when they look at what’s happening here.”

Nevertheless, the outlook is uncertain against a backdrop of empty office space, for the short to medium term at least, in terms of new major projects.

Tight banking conditions mean a substantial project needs a pre-commitment from an anchor tenant to proceed, unless a developer is willing to build it from their own balance sheet.

In Perth, BGC is the only developer historically willing to do that.

And BGC is at it again, with its development arm proceeding with construction of a 22-storey office tower, part of its $500 million 480 Hay Street precinct, which also features a luxury Westin Hotel, before negotiations with an anchor tenant are finalised.

“To do that, you need to have a balance sheet that allows you to do it, because you’re not going to get any debt funding on it,” Mr Williams said.

“And you need to be private, because if you’re listed, you’re playing with other people’s money and the appetite isn’t there in the market for that type of risk.

“So if you have to be a private with a sufficient balance sheet to do it; there are a few in Perth that fall into that category, but none of them has done it before except for BGC.

“They are the only ones that will ever do it in this place.”

Brookfield Property Partners’ Australian office division president, Kurt Wilkinson, said developing an office building without an anchor tenant was certainly not a strategy the global player had ever pursued, but he remained sufficiently confident in the long-term prospects of the Perth property market.

It is also one of the only developers with a prospect to start a significant new building in the near future, holding the rights to develop lots five and six at Elizabeth Quay.

Oil and gas giant Chevron also holds property at Elizabeth Quay, and is advancing plans for a sizeable office tower to house its staff, which the Metropolitan Redevelopment Authority expects will start being built towards the end of next year. 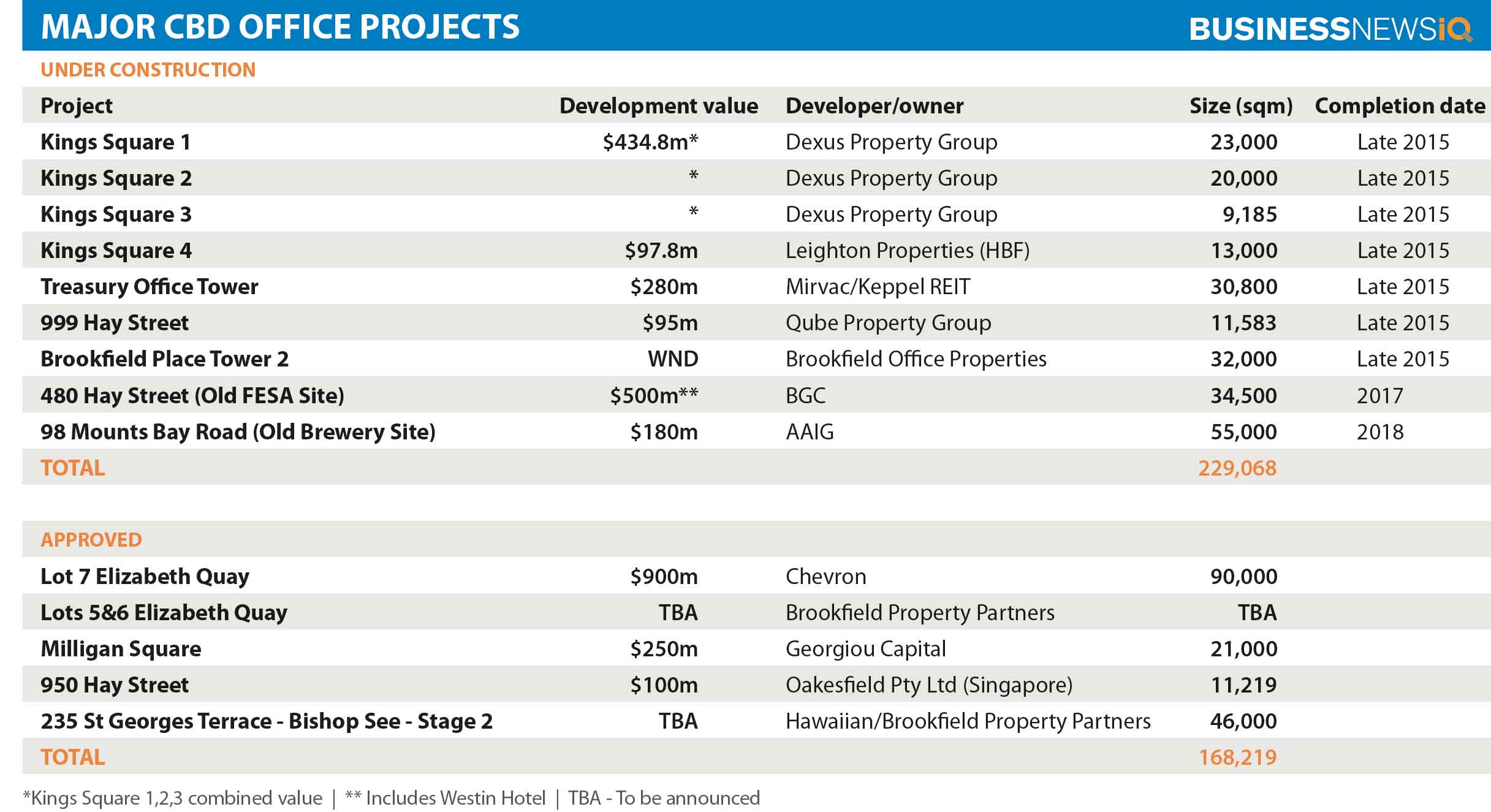 For Brookfield, Mr Wilkinson said design works were in the preliminary phase for a two-tower development at Elizabeth Quay, but the project hinged on securing a suitable anchor tenant.

“We’re working very closely with the MRA on our planning for that site, and we’re also talking to some prospective tenants for the office development,” Mr Wilkinson told Business News.

“It’s very early stages for us, but it’s an exciting piece of commercial real estate for the transformation of Perth’s waterfront and it links in very well to Brookfield Place and some other holdings that we have.

“Notwithstanding the market conditions today, when we’re talking about a development site that we have still got to go through the planning and the detail for, talking to tenants today for a medium-term proposition is something we’re very confident with.”

Mr Wilkinson said the Elizabeth Quay plot was indicative of the opportunities available in Perth for the multinational development giant.

“We do still see that there is good opportunity in Perth for us,” he said.

“The interesting thing about the Perth market is it has seen pretty sizeable growth in the amount of stock in the past 10 or 12 years, so it’s been a market that’s changed dramatically.

“And when you look at the market, there is still not a lot of A or premium buildings, so it’s not very typical to other markets around the country.

“That’s where we see a lot of interesting opportunity.”

One thing is for certain, tenants shifting into newly built space have put landlords of older buildings in a tougher position; needing to either slash rents or refurbish premises to bring it up to a standard comparable with the new stock.

Business News reported earlier this year that about $300 million worth of major refurbishment jobs along St Georges Terrace were either recently completed or ongoing.

One of those jobs is the refurbishment of the Brookfield-owned 108 St Georges Terrace, which includes an $11 million restoration of the historic Palace Hotel. 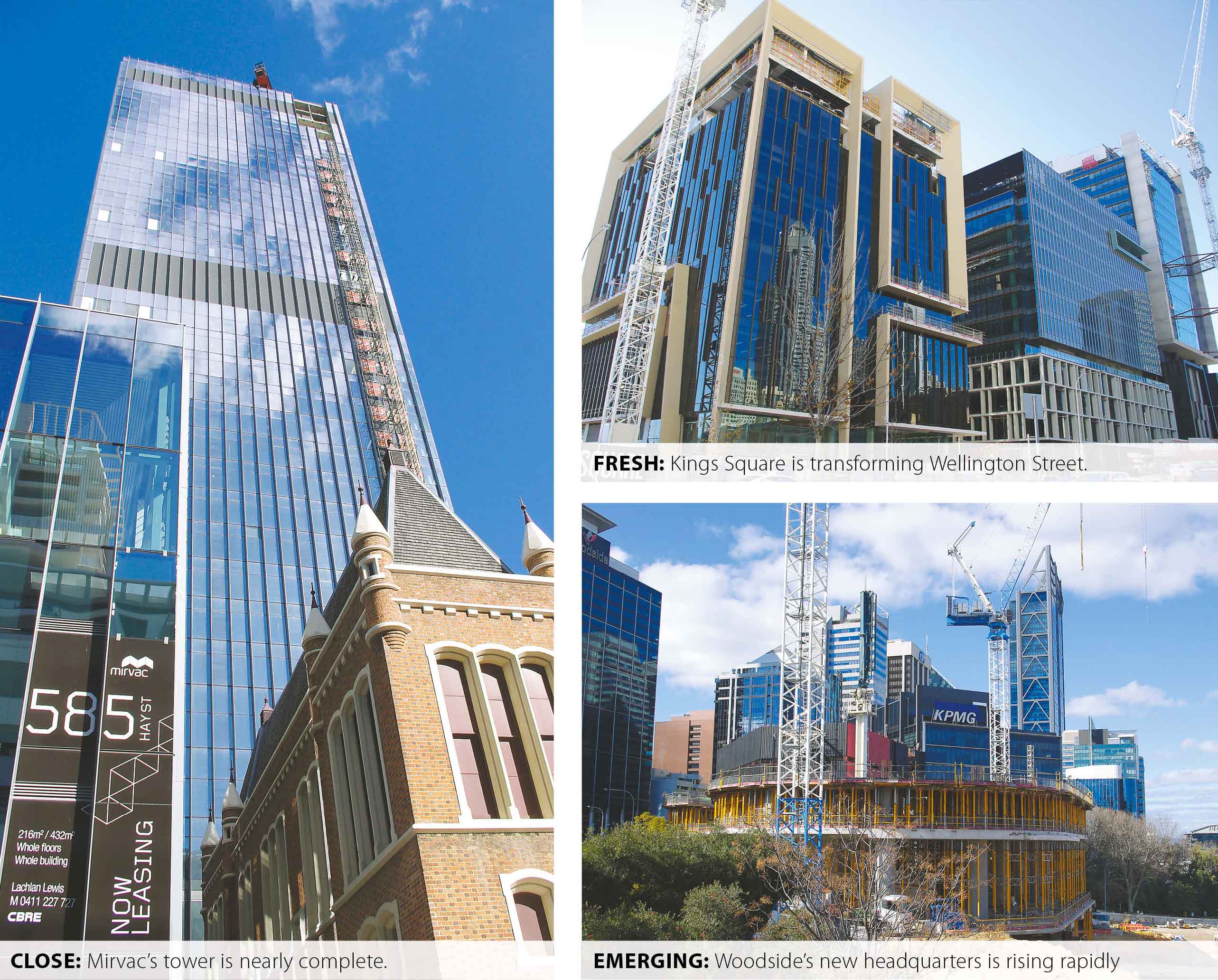 While Mr Wilkinson would not be drawn on specific tenants for the Palace Hotel, he did suggest high-level retail and food and beverage would be a good fit.

For the rest of the building, a progressive refurbishment has been under way, which Mr Wilkinson said had been paramount in attracting new tenants, including South32.

“Obviously we had an opportunity because Bankwest was leaving, but we also had the view that if we didn’t address the property appropriately, come any softening in market conditions we wouldn’t have been a successful as we have been,” he said.

“So we were very thoughtful and proactive about making sure we did the right level of refurbishment and getting onto at the right time.

“If you’re not actively engaging and repositioning and reinvesting in your real estate to make sure that it’s always going to present as an attractive option, it’s going to be hard to keep up with the market.”

Among a suite of CBD assets, the developer and landlord owns Wesfarmers House, which is to be vacated by its namesake company early next year, with the diversified conglomerate moving to new digs at the second tower at Brookfield Place.

Mr van der Walt said Wesfarmers still had around four and a half years remaining on its lease at Wesfarmers House, but he was unsure whether that space would be filled by one of its subsidiaries, or whether it would go to market.

“We’re sorry to lose them, they’ve been a great tenant; but it is what it is, people move on,” he said.

However he expected the building to attract considerable interest if it did go to market, despite being developed in 1985.

“There was an article about the building being old and tired; it’s old, but it’s certainly not tired,” Mr van der Walt said.

“We’ve spent a substantial amount of money upgrading the building … we’re not too concerned.

“It’s a great building, it’s a great location and hopefully the market will improve in the next few years.”

In the wider market, Mr van der Walt agreed that the trough Perth’s office market appeared to be in was simply cyclical.

“We’ve been way over-rented here, and that’s our problem,” he said.

“Landlords are partly to blame; when you get rentals going to the level they were, when things come off it really hurts.

“Much lower than that, it’s very hard to make anything work, and anything more than that is too onerous on the tenant.

“But incentives are too high at the moment. There is a surplus of space and you need to bribe tenants in, so it’s a great market for tenants.”

Despite the rising vacancies and the challenges with signing tenants, JLL’s Mr Williams said landlords were certainly not panicking and putting assets onto the market.

In 2015, Colonial First State Global Asset Management is reportedly close to finalising a deal to sell its 50 per cent stake in the Exchange Tower to a fund managed by Morgan Stanley, a transaction that would value the entire tower at around $240 million.

“There’s no panic from the owners up and down the Terrace,” Mr Williams said.

“If there was, there would be a whole lot of transactions happening.”

The only other assets being marketed are included in a portfolio of office properties owned by the state’s third largest CBD landlord, the Insurance Commission of Western Australia, which is seeking to reduce its exposure to direct property investment.

ICWA expects to reap around $800 million from the sale of its portfolio, which comprises the Forrest Centre, Westralia Square and Westralia Plaza, along with two suburban shopping centres.

ICWA chief executive Rod Whithear said he expected to see strong interest in the assets, and a deal to be struck before the end of the year.

“Buyers will be attracted to the strong fundamentals of the Western Australian economy, such as higher economic, population and employment growth, compared to other parts of Australia,” Mr Whithear told Business News.

But industry sources suggest the timing may not be exactly right to sell off such a significant portfolio, with institutional investors looking closely at a $1 billion portfolio of commercial property, mostly on the east coast but including Wellington Street’s Four Points by Sheraton hotel, being marketed by Singapore’s GIC.