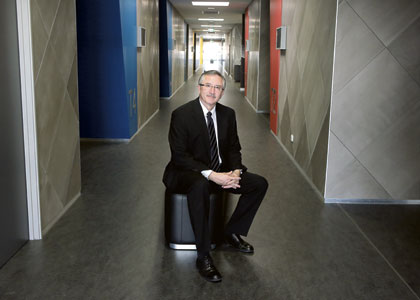 A PURPOSE-BUILT $11 million facility has opened in Jandakot to meet the growing demand for heavy industry workforce training.

Training provider Aveling’s official opening of the 15-room training centre is evidence of the spin-off benefits investment in resources and related industries is having on local companies.

Aveling started off with just one man – Tony Aveling – offering safety training to mine workers from a single room in Welshpool.

The company was founded on Mr Aveling’s knowledge of the mining industry, gained through years in various mining roles – from being a heavy machinery operator to working in human resources.

Thirteen years later, the company employs about 90 staff, trains around 90,000 people a year, and has an impressive facility to conduct its wide-range of training courses.

Mr Aveling told WA Business News it was a contract with Rio Tinto-owned Hamersley Iron that helped push his company along. Rio Tinto has since grown to become the Pilbara’s largest iron ore operator and remains one of Aveling’s key clients.

Staff turnover and growth in the Pilbara means about 340 Rio staff need to undergo training every month.

It is numbers like that emerging from WA’s mining boom that have helped Aveling grow to its current size, and therefore the need for the facility in Jandakot.

Mr Aveling said he started looking for a new location in 2008, having already purchased or leased properties in Leederville, Victoria Park and Bassendean.

“And then the recession hit, which slowed things down a little bit,” he said.

But the economic slowdown didn’t affect the company too significantly, and for the past few years it has been managing to conduct training through nine centres around the Perth metropolitan region.

It was mostly a stop-gap measure, Mr Aveling said, until the Jandakot facility was completed.

Negotiations over the location were finalised in 2011 with Jandakot Airport Holdings agreeing to pay the $9 million build cost and granting Aveling a 10-year lease – Aveling invested $2 million in fitting-out the facility.

While the mining sector accounts for a large proportion of Aveling’s business, it hasn’t focused solely on that stream of revenue.

“It was clear that if there was going to be a dip in the resources industry then of course we needed to protect the company by offering other services as well,” Mr Aveling said.

That diversification has meant also offering courses such as the Responsible Service of Alcohol training, but it has yet to delve into the oil and gas market, despite the sector being pitched as a major growth opportunity.

“For me it’s a matter of being able to deliver; if you come to me you should know you are important to us and we’re not spreading ourselves thin,” Mr Aveling said.

“People ask if I’m worried about the mining industry, but if you take Rio Tinto for instance – they’ve spent billions of dollars. Fortescue have done the same, Gina Rinehart, BHP, overseas companies have all come in and they’re spending billions of dollars.

“That’s not saying the industry is going to fail tomorrow; even if the industry contracts for a year or two, the infrastructure is going to be there – it’s a long term, 50 or 100-year gig.”