Kwinana-based Baileys Fertilisers prides itself on being a leader in the development of specialist products for the turf industry, and the supply of potting soils for the domestic market.

Kwinana-based Baileys Fertilisers prides itself on being a leader in the development of specialist products for the turf industry, and the supply of potting soils for the domestic market.

Opening their first premises in Spearwood in 1926, the Bailey family initially worked as a supplier to market gardeners, flower producers and orchardists.

The business remained at Spearwood until the early 1990s, when it moved to Kwinana to meet the increasingly sophisticated demands of the agricultural and horticultural trades.

Baileys soon found itself a leader in the development of specialist products for the turf industry and, later on, the domestic market.

With the nursery trade blossoming, Baileys introduced a range of controlled release fertilisers to nurseries across Australia last year.

Despite its growing market share and developing product suite, the company's factory had, until recently, been plagued by recurring problems.

According to general manager David Bonfield, there were manufacturing problems with the granulation production process, specifically with regard to the conveying of bulk raw materials.

For example, up to 4 tonnes of granulated fertiliser was falling off its conventional flat conveyor system each day, requiring up to two hours work by staff to recover the lost product.

"We'd get major spills everyday from the old system, but that was not the only issue,"Mr Bonfield told WA Business News.

"From an OHS and environmental point of view, having spillage and dust in the atmosphere isn't good for our staff's health either.

"In an eight-hour shift we have the potential to manufacture 20 tonnes of granulated fertiliser, but we were only producing 16 tonnes at the most."

Mr Bonfield said that, while owner Kim Bailey and the company's management team were reassessing Baileys' granulation operation, Kewdale-based company Innovative Conveying Systems International was working on a conveyor system of its own, and had dropped a pamphlet off to Mr Bonfield.

"We looked at different conveyor systems but they were all flat and all posed the same problems we had before," he said.

"We discussed our problem with Innovative Conveying Systems International and worked with them to solve our problem. Their new conveying system was fully enclosed; this enabled the fertiliser to be carried in the tube shaped belt along framework fully enclosed free from dust and spillage to the drop off point."

The prototype conveyor system was the first of its kind to be installed in a working factory in Australia.

The enclosed conveyor belt provides dust suppression and prevents dust from becoming airborne by completely encapsulating the material, eliminating dust emissions between the load and discharge points and sealing it from the external environment.

According to Mr Bonfield, particle emissions are a constant threat and preventing this means protecting field personnel and the environment from contamination.

He said excess waste was no longer an issue at the factory, with the new ICS conveyor system allowing the process to turn corners, meaning Baileys had more efficient use of its factory floor.

"With flat conveyors, you can't turn corners so you need one conveyor dropping your product off below to a separate conveyor, which creates more problems because you lose fertiliser at that point," Mr Bonfield said.

Up to two hours a day are gained back in production time, production rates have increased, and staff are happier.

"Due to the success of the first system we will be installing a second conveying system to carry our organic potting mixes 30 metres from the bulking hopper to the automatic bagging machine," Mr Bonfield said. 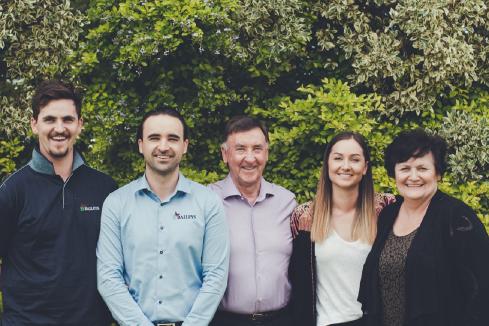