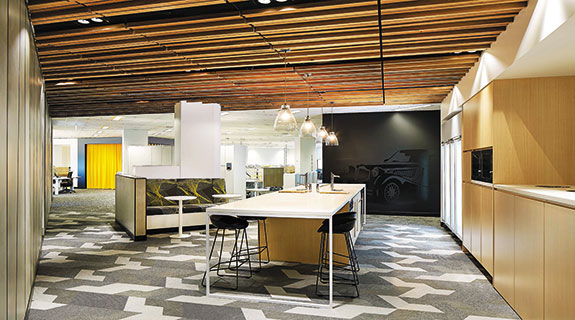 CAFÉ STYLE: Amenity for staff was a focus for the Department of Transport’s fitout by MKDC. Photo: MKDC

Perth’s office market swung largely in favour of tenants during the past 12 months, with research from commercial agency Colliers International showing incentives to take up A-grade space had reached 35 per cent of the lease value, forecast to blow out to 40 per cent in 12 months’ time.

The incentives have largely increased because of the wave of new projects being built, most of which are due to be finished by the end of the year, including Kings Square, Brookfield Place Tower 2 and 999 Hay Street.

To compete with the new builds, commercial owners have been forced to foot the bill for fit-outs, providing significant opportunities for interior design firms.

IA Group managing principal Nick O’Hara told Business News many tenants previously priced out of the CBD were taking advantage of lower rents, as well as the incentives, to obtain prime office space in the centre of the city.

“We’re finding that many companies are trying to downsize their space, and technology is driving the use of more efficient space,” he said.

“People don’t need massive workstations anymore and storage has been reduced because of digital media.

Mr O’Hara said offices were now designed to be able to be used for five to 10 years with minimal need for refurbishment or reconfiguration.

“It is flexible design that doesn’t have too much built environment,” he said.

“If you need to create a space for 10 more people to work, you just take out some soft seating and you put 10 workstations in.

“You don’t have to build new walls or put in new power and data, it’s already there.

“The costs of ownership for that fit-out are heavily reduced, and tenants amortise that cost over a longer time period.”

MKDC director Kathleen Kusinski also said lease incentives were stimulating the market for interior designers, not only for new office space but also for the reconfiguration of the office space that tenants were exiting.

MKDC is working on a new fit-out for Colliers International at the Governor Stirling Tower, which features facial recognition security, touch-screen interactive smart boards, glass that switches from clear to opaque in meeting rooms, and biometric-enabled systems.

“All of those new technologies and all of the new ways of thinking and working are very much available here in Perth and we’re able to deliver them,” Ms Kusinski said.