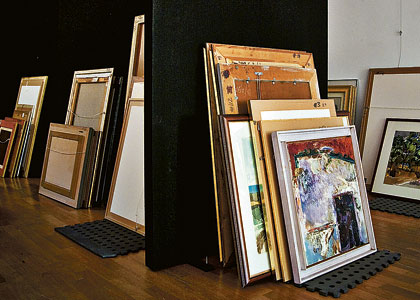 The federal government introduced new rules in July last year around how self-managed super funds invest in art and the art sector is already feeling the effects on sales, according to industry insiders and stakeholders opposed to the changes.

The regulations state SMSFs cannot derive a present-day benefit from art as an investment, they can only do so for future financial gain.

Art has to be stored at premises independent of fund-related parties and must be insured accordingly, to make sure the sole purpose of the investment is to provide financial security in retirement.

Ian Flanagan, who owns art auction business GFL Fine Art, has firmly opposed the regulations since they were offered as an alternative to the Cooper review into superannuation’s 2010 recommendation that art be entirely wiped from super funds.

Mr Flanagan has compared the art auction revenue numbers between 2010 and 2011 from an international art auction reporting agency and the Australian Art Sales Digest and said the SMSF market had been all but removed from sales, thanks to the changes.

His numbers show Australian revenue in art auction sales is down 3 per cent while China is up almost 50 per cent, Indonesia is up almost 40 per cent and worldwide figures show growth in revenue of more than 20 per cent.

In recent years, 40 per cent of Mr Flanagan’s sales have been to the SMSF market but those numbers have changed dramatically.

At an auction held in June last year, he said the SMSF market accounted for 10 per cent of sales and by December it had fallen to zero.

Mr Flanagan puts this down to the changes in the rules around super fund investment in art resulting in the SMSF market being wiped out.

Michael Levitt, who manages his own super fund, which is heavily invested in art assets, attacked the government over the changes.

“As of July 1 (last year), I simply cannot accumulate any more art in my super fund,” Mr Levitt said.

“Whether it is legal or not, the regulations are so draconian, onerous, expensive and so utterly inconsistent with the notion of collecting art, that no one in their right mind will add a piece of art to their super fund.

“The simple fact is, on July 1, art stopped going into super funds in Australia.”

Art held in a super fund before July is not accountable to the new laws until 2015.

Both Mr Levitt and Mr Flanagan expect a flood of art to come on to the market at that time, effectively lowering the value of super fund portfolios through supply and demand issues.

Mr Levitt said he saw little point in the regulations and claimed they were “ideological class warrior” moves from the government.

At the meeting, specialised SMSF accountant and auditor David Schildkraut suggested to Mr Shorten that allowing art to be leased by related parties at commercial rates (similar to the allowances made for commercial property held in SMSFs) would provide a solution for the dismayed art industry and feed money back to the government by way of income tax.

Mr Shorten requested that Mr Schildkraut submit his proposal to Treasury.  A spokesperson for Mr Shorten’s office told WA Business News the minister had received the submission and was “comfortable with the current settings”.

Mr Flanagan is hopeful a coalition government may change the picture.

“There is a need for the coalition to come out and say they acknowledge the stupidity of these changes and they would be prepared to repeal them or look to a solution in line with Schildkraut’s submission,” he said.