Neometals gets serious about nickel with resource boost

Neometals is continuing its push into nickel with the expeditious upgrading of its inferred nickel resource at the Munda deposit, which is now a strategic part of the company’s Mt Edwards project near Widgiemooltha in WA. The update has significantly impacted Mt Edwards’ growing inventory, boosting its contained nickel resources to over 130,400t of contained metal, clearing the way for mining studies. 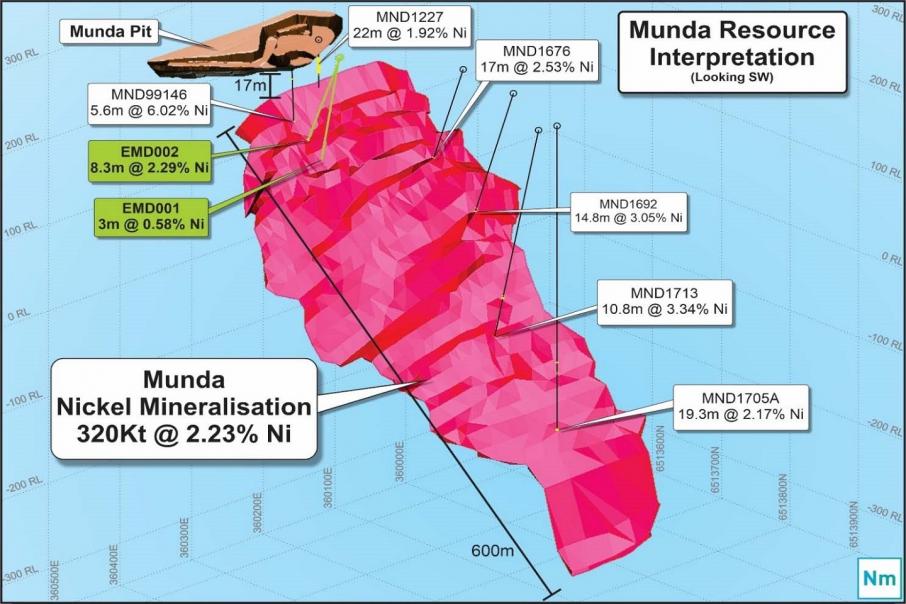 ASX-listed minerals developer, Neometals, is continuing its push into nickel with the expeditious upgrading of its inferred nickel resources at the Munda deposit, which is now a strategic part of the company’s Mt Edwards project in WA.

The update has significantly impacted Mt Edwards’ growing inventory, boosting its global contained nickel resources by 5.8% to over 130,400t of contained metal.

Located just 40 kilometres south west of the global nickel capital of Kambalda and 5km west of Widgiemootha, Munda’s mining lease is surrounded by the Mt Edwards project, with Neometals holding mineral rights over a significant portion of the prospective Widgiemooltha Dome tenements.

Neometals is targeting distinct, high-grade zones in what is an undeniably well recognised nickel mining district.

Recent diamond drilling at Munda intercepted nickel sulphides in the eastern area of the main Munda nickel channel, with assay results confirming an 8.3m zone of mineralisation from 93m downhole, revealing an enriched zone of 2.3m at 6.11% at the base of the ultramafic unit.

The mineralisation, which remains open across-strike and down-dip, is found within embayments in the komatiite-basalt contact interpreted to be thermal erosion channels caused by the flow of hot ultramafic lava.

Neometals now plans to continue its diamond core and drilling sampling to firm up its understanding of Mundo’s specific gravity and mineralogy, which will likely increase its confidence in the deposit, enable a mineral resource upgrade and pave the way for early mining studies.

Given that these holdings, which sit in one of the world’s most nickel rich regions, haven’t been closely looked at since 2007, the application of Neometals’ geological expertise could well reveal further upside at Mt Edwards’ in the not too distant future.