With the moratorium on rental evictions and price increases coming to an end, industry explores what's next. 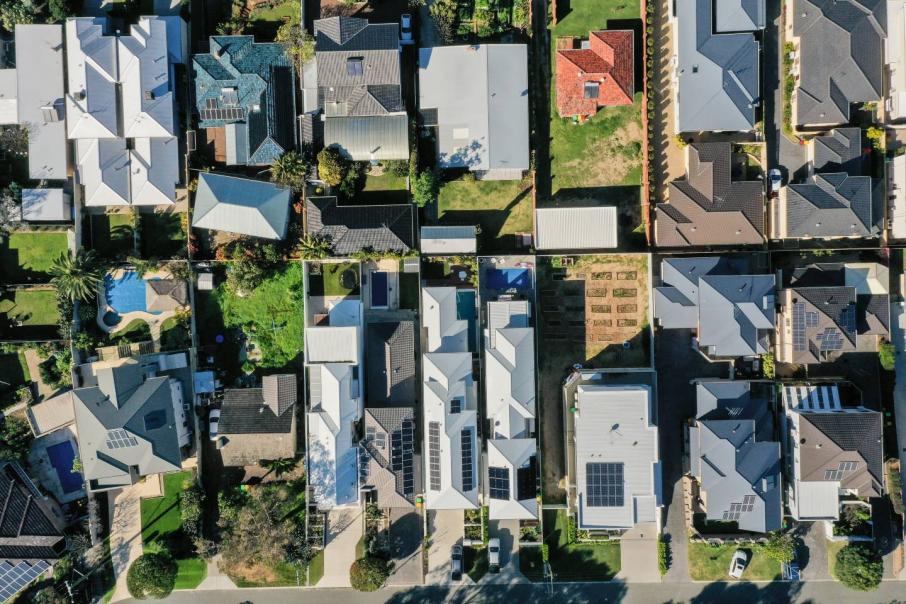 The state government’s decision to extend its emergency residential tenancy laws late last year took many property groups and landlords by surprise, given the increasingly robust performance of the local economy.

The Residential Tenancies (COVID-19 Response) Act 2020 was introduced in April to help people in private and public housing remain in their rental homes at a time of significant uncertainty over the economic and financial impacts of COVID-19.

In September 2020, the Act was extended for an additional six months until March 28 2021, despite industry groups such as the Real Estate Institute of Western Australia lobbying for the state government to consider removing all restrictions for all tenants not affected by COVID-19.

REIWA president Damian Collins said industry had understood the need for the emergency laws when COVID-19 hit, with residential rental vacancy before the pandemic relatively balanced at about 2.3 per cent.

By the end of 2020, however, the market was experiencing record lows of rental listings (see graph), with the rental vacancy rate continuing around the 1 per cent mark in the months since.

Mr Collins said while the moratorium was not the only contributing factor to stock shortages, noting investors had been in short supply in WA in recent years, the legislation’s limitations had certainly deterred those considering renting their property.

“All it did was make a bad situation worse,” Mr Collins told Business News.

“The last five years have been the worst in REIWA’s recorded history … the longest downturn we’ve seen in 45 years of recording data.

“We’re in a position we don’t find ourselves in often where we’ve got a chronic shortage of properties for sale and of properties for rent, so prices are only going in one direction for both of those and that’s up.”

Mr Collins said many renters had been in a viable position to afford price increases when the moratorium was extended, with WA’s unemployment rate continuing to decrease backed by a strong mining economy.

Post moratorium, Mr Collins expects median rents to continue to adjust and grow throughout 2021, off the back of the rental median price growing from $350 per week 12 months ago to $400/week.

Affordability has been raised as a key concern, particularly the pressure further price hikes could place on social housing.

However, Mr Collins said it was important to stress that median rents were still some way off matching peak levels in 2014. 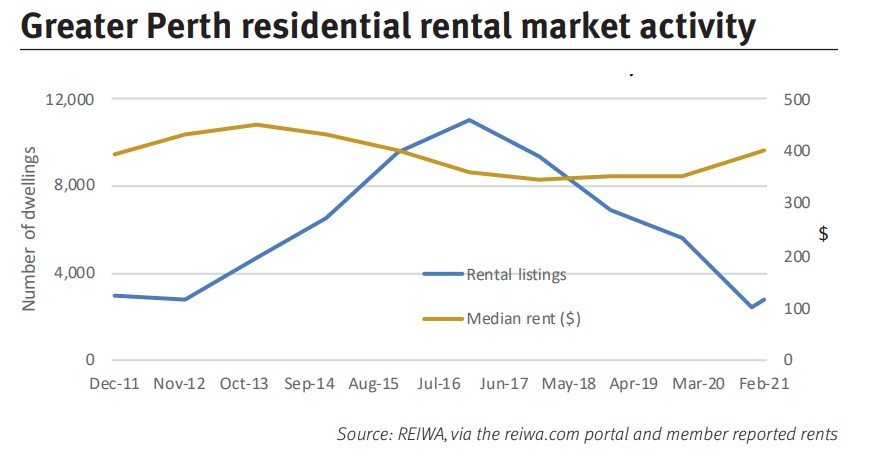 While the moratorium on evictions had restricted some movement in rental supply, Mr Collins did not expect any drastic impact on stock post March 28.

He expected some landlords would opt to sell, with most open to negotiating rates with existing tenants.

A reshuffling of occupants was another likely outcome, Mr Collins said, with those seeking more affordable rent becoming more open to sharing or leasing out a spare room. In the long term, stimulating investor activity would have the biggest impact on rental stock, he said.

“This is going to be a strong year in growth … we’re in catch-up mode,” Mr Collins said.

“This often happens in real estate because it’s such a long lead time for supply to meet demand.

“Hence why we often go into oversupply and undersupply … and in WA it’s a bit of a boom and bust, there’s not too much middle ground here.”

Milestone Realty owner and real estate agent Jason van Straalen shares a similar prediction for growth in the year ahead but expects a more gradual trajectory.

“It’s going to be fairly stable – I don’t think it will go totally crazy as long as people aren’t being kicked out when they shouldn’t,” he said.

“The truth is, there’s only so much people can pay as well; there’s probably some expectations that won’t be met by landlords because people can only afford so much.

“I’ve seen some landlords expecting 20 to 30 per cent increases and I think that’s pretty unlikely. If people can’t afford it, they’ll just move to something they can afford or move back in with family.”

That included properties in the Pilbara and Tom Price, where he said rents were at unbelievable prices, driven in part by the lack of supply and strong demand from companies such as FMG and Rio Tinto.

“If I could have a couple more properties up there to lease today, they’d be leased tomorrow.”

Part of the WA Housing Strategy 2020-2030 outlines the need for WA to explore new rental and investment models to deliver social and affordable rentals at scale.

Property Council of Australia executive director WA Sandra Brewer said the target was highly ambitious and required significant additional rental accommodation to be injected into the market at an above businessas-usual rate.

“If annual private-sector dwelling approvals over the next 10 years were in line with WA annual average approvals over the last 10 years of 21,500 per annum, this target would require 60 per cent of all new dwellings to be added to the rental market,” Ms Brewer told Business News.

Build-To-Rent (BTR) product was the ultimate shovel-ready residential project, she said, as these projects did not require pre-sales to begin construction.

The BTR model is in its infancy in Australia but makes up one of the biggest asset classes in the US, with projects relying on a long-term capital source to fund the equity of the development.

Under a BTR model, developers build to own and lease stock, rather than sell, with residences retained by a property developer or a managed investment trust.

“Our idea of a $15,000 ‘Rightsizer Grant’ for people over 65 would contribute to freeing-up large homes for families to rent.

“Making the stamp duty rebate on apartments permanent, levelling the playing field for BTR, and reducing barriers to international investment are just three initiatives that could make a difference quickly.”

The UDIA has outlined how addressing land tax and tax settings governing managed investment trusts could increase the appeal of BTR for local developers, however, that required a longer-term approach. Enticing smaller-scale investors back into the market was an easier and more immediate solution to the current rental stock crisis, Ms Steinbeck said.

“This has led to a lack of supply, which, coupled with significantly increased housing demand throughout 2020, has driven the rental vacancy rate to the historic low level of 0.9 per cent.”

Stamp duty reform has long been flagged by UDIA WA, and other industry groups such as REIWA, as a potential drawcard for investor dollars, but also those shifting from renter to prospective buyer.

Ninety per cent of respondents to a recent REIWA survey of more than 1,000 Western Australians considered stamp duty a significant barrier to home ownership.

“Without fostering investment, this crisis is likely to drag on for several years.”

According to Urbis Apartment Essentials data, which analyses vacant stock in complexes of 25 apartments or more, there are more than 1,600 completed new apartments available for sale throughout the Perth metropolitan area.

UDIA WA has called for a short-term stamp duty rebate worth 75 per cent for purchasers of new apartments, if that apartment is then immediately put on the market for rent.

“By offering a short, sharp stamp duty rebate in line with the current off-the-plan rebate scheme to qualified investors with tenancy agreements in place, this is the shot in the arm that investors need who have been sitting on the sidelines waiting for the right opportunity,” Ms Steinbeck said.

Real estate and development professional James Limnios, who is the chief executive of Limnios Property Group, has also proposed one variation of stamp duty reform.