Natural order as iiNet logs out

As companies seek growth outside of WA, the reasons to remain domiciled here diminish. 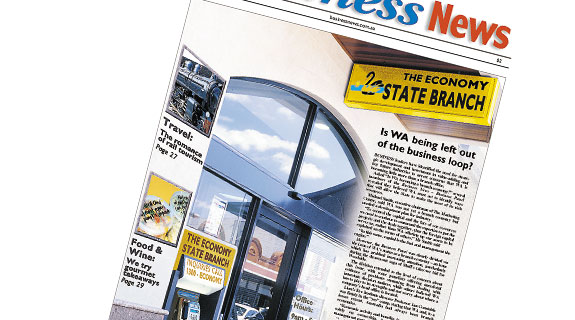 BRANCHING OUT: The Business News front page from 2001 highlighted the effects of a ‘branch economy’.

The conditional success of TPG Telecom’s bid for iiNet ends a few months of drama that included the interjection of disappointed founder Michael Malone, who believed the Perth-based ISP had become vulnerable to takeover because it lacked a coherent strategy.

As a local observer of business, I am disappointed too; I don’t like to see major companies disappear from the scene, especially ones in consumer businesses where Western Australia has traditionally performed poorly. It is challenging to run retail businesses from a low population area a long way from the where the key markets are. It is the same for manufacturing, which is why WA has few big businesses in that sector.

It takes a lot of grit to survive, let alone succeed, against such market forces and, sometimes, you just have to let go. Mr Malone chose to leave iiNet a couple of years ago. He’d already brought in outside shareholders when the company listed near the turn of the century. If he believed iiNet could successfully remain independent, he should have stayed in control on the register and in the boardroom; that has what TPG’s chief, David Teoh, has done.

Nevertheless, the sentiment from Mr Malone at a personal level will be reflected in the feelings others have in terms of losing an important head office from the state.

Thankfully the situation is significantly different than in the late 1990s, when we saw a host of major local businesses succumb to national takeovers – part of a trend that had been taking place over the previous two decades.

In 2001, we went so far as producing a cover story on the phenomenon of the branch economy – the threat that WA would be left without major businesses headquartered here; a constraining economic factor that took decision makers, job opportunities, and political influence away from Perth.

At that time, Woodside Petroleum was WA’s biggest company and had just seen off of a takeover bid by global oil giant Shell. There had been plenty of others. WA brands had disappeared in consumer goods, mining and even in less corporate fields such as the legal profession.

It was a trend that worried a lot of people. Then the mining boom came along, and things changed. Not only did WA become home to many more ASX 200 companies in resources, it also drove local industrial companies servicing the broader economy, which was also being boosted by rapid population growth.

Companies such as Fortescue Metals Group grew out of nothing, drawing up a host of sizeable lookalikes. Wesfarmers dramatically took over Coles to create a retail giant and the nation’s biggest private employer headquartered in Perth. There are other examples, such as Automotive Holdings Group, which has become a big player in car retailing.

In addition, the iron ore operations of non-Perth domiciled mining giants such as BHP Billiton and Rio Tinto became so significant they were in many ways the tail wagging the dog. Sam Walsh’s promotion from Rio Tinto Iron Ore in Perth to run the whole company was something of a first; previously, WA was a low margin backwater where few companies sent their future leaders for testing.

Even the discarded assets of the big miners have contributed. South32 has become a major company headquartered in Perth after being prised out of BHP.

Of course, with the mining boom over, it is possible that the branch economy trend may resume now that local growth is subdued. Perhaps iiNet is part of that.

Or maybe it never really ended, with events like the Commonwealth Bank takeover of Bankwest in 2008 an example, even though the WA bank was already a branch office before its owner, UK giant HBOS, got in trouble.

Then again, there’s always the suggestion that BHP moves its headquarters here, a perennial favourite of mine. I was bemused last week when I saw coverage of BHP’s decision to cut its Melbourne head office staff to 300, prompting some writers to compare that workforce with the company’s (slightly larger) Singapore staff. The Australian Financial Review even got so excited by the comparison it reminded its readers that BHP was safely headquartered in Melbourne because it had agreed to stay in the city as part of winning federal approval for its 2001 deal to merge with South Africa’s Billiton.

Just a few facts were overlooked here. Firstly, when BHP moved into Brookfield Place a couple of years ago, it shifted 3,000 people into 39 floors. Even if that has slimmed down, it would make Melbourne seem paltry by comparison. Oh, and if you look at then-treasurer Peter Costello’s announcement approving the BHP-Billiton merger, it was conditional on the headquarters remaining in Australia, not Victoria. Moving to WA would seem like a practical step to me.

Automotive group RAC has teamed up with the Chamber of Commerce & Industry WA to examine the issue of congestion – a cost to business that slowly erodes our lifestyle.

News of the move reminded me of recent reports about how the government of New York City had back-flipped on moves designed to protect the taxi industry by regulating share-riding group Uber.

New York City Mayor Bill de Blasio had claimed Uber was causing congestion. He soon found out, to his cost, the public backlash to that twisted logic. He might have been better off recognising that if a passenger was in an Uber vehicle then a taxi, or typical private vehicle was unlikely to be on the road.

It’s pleasing to see consumers having a win in this important disruption of the public transport sector.