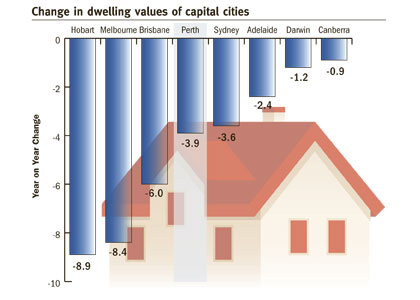 CAPITAL city dwelling values continued to fall in May, driven by weakness in the market for detached houses.

The RP-Data Rismark May Home Value Index registered a fall in dwelling values across the eight capital cities of 1.4 per cent for the month, representing a 5.3 per cent fall compared to the same time last year.

During May, only Adelaide recorded an increase in dwelling values of 1.2 per cent as all other capitals fell. This contributed to an overall fall of 5.3 per cent year on year.

Dwelling prices in Perth were down by 3.9 per cent year on year, and 1.7 per cent in May.

With values continuing to fall, Real Estate Institute of WA data showed that sales to the nine weeks to May 30 increased by 24 per cent compared to the same period last year. That resulted in the number of listings falling to 13,291 at the end of May, compared with a peak of 14,358 in March.

RP Data research director Tim Lawless said the weakness in dwelling values was being driven by lower consumer sentiment and lower values of detached housing, which overshadowed a marginal rise in unit values.

“It is clear that the market is becoming increasingly price-point driven,” he said.

“Unit values across the combined capitals increased in May and they are up by 1.3 per cent over the first five months of the year.”

“Investors have to come to grips with the new reality: Gen Y wants to live close to their workplaces, cafes and entertainment venues,” Mr James said.

Mr Lawless added that the affordable end of the market was performing better, down only 1.5 per cent compared to 6.1 per cent for premium dwellings.

The RP Data-Rismark index also showed that rental yields in Perth increased during May by 4.4 per cent for houses and 4.7 per cent for units. That was despite REIWA recording a rebound in available rental properties of 19 per cent in May, compared to a low of 2,105 in March this year.