There’s plenty of political manoeuvring ahead in the regions as the parties mark out their territory. 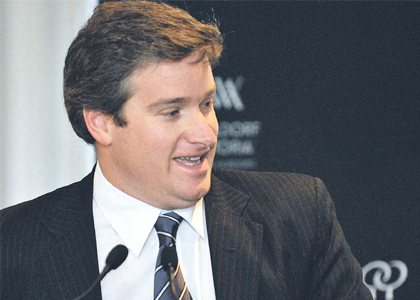 BIG SPEND: Brendon Grylls, who has put his career on the line in choosing to run for the seat of Kimberley at next year’s state election, tabled a progress report on Royalties for Regions spending in parliament last week. Photo: Grant Currall

There’s plenty of political manoeuvring ahead in the regions as the parties mark out their territory.

THE Labor Party’s threat to withhold preferences from the Nationals at the state election next March is a direct response to the rural-based party’s expansionist strategy, which has three traditional Labor seats in its sights.

The Nationals hold five seats in the Legislative Assembly, several thanks to Labor preferences last time, including Blackwood-Stirling held by Agriculture Minister Terry Redman. But Labor is sending a strong message that its preferences aren’t a sure bet next year.

It’s fair to say that the Royalties for Regions policy has proved extremely popular in regional Western Australia. And why not? With more than $ 1 billion being guaranteed for the regions each year, country voters would have to be extremely ungrateful not to lean the Nationals’ way come voting time.

That’s the theory; and the Nationals are putting it to the test. In addition to strong campaigns to retain their traditional southern seats, they are making a huge effort to break new ground in northern seats such as Kimberley, Pilbara (where party leader Brendon Grylls is putting his career on the line), and Kalgoorlie, where former party president and current MLC, Wendy Duncan, is hoping to win following the decision of independent John Bowler to quit politics.

The party also has to defend North West Coastal, where Vince Catania crossed party lines after winning as a Labor candidate in 2010.

Coincidentally, the Labor members in Kimberley (Carol Martin) and Pilbara (Tom Stephens) are retiring. And in Kalgoorlie, Mr Bowler was originally elected as a Labor man, although his personal popularity led to him winning last time as an independent.

Mr Grylls underlined the significance of the Royalties for Regions scheme when he tabled a progress report on its operations in the Legislative Assembly last week (see table).

“The report highlights a range of projects across regional WA,” Mr Grylls said. “Since 2008 to the end of the 2012-13 budget, $3.4 billion has been allocated under the Royalties for Regions program. This amounts to more than 2,500 projects.”

He singled out several of the projects, and they were all in seats his party hopes to pick up next year. The first was a new hostel for indigenous visitors in Kalgoorlie.

“For years there has been what I can only call a depraved situation on the outskirts of Boulder, where people from the land were coming in and camping in terrible conditions,” Mr Grylls said. “Now, with the support of the member for Kalgoorlie (Mr Bowler), we have a brand-new, purpose-built hostel providing suitable and safe accommodation for people who come in from the land.”

“In the electorate of the member for North West, Royalties for Regions funded the irrigation pipeline in the Gascoyne, which is a really important project that will give certainty to the growers in Carnarvon that they will have water when they need it; whereas, previously, the pipeline was simply falling apart,” Mr Grylls said.

And he didn’t forget his new battleground, the Pilbara, noting: “In the last financial year, $239 million has been injected into the Pilbara, with the most important project located in Port Hedland, where rents continue to be resilient, even though there is a bit of softness in the market at the moment,” he said.

“That project will provide 120 subsidised houses for less than $ 1,000 a week rent, with 50 already allocated, and the rest will be provided by transportable homes that are coming in at the moment.”

The fact that big money has been injected into the Pilbara is no surprise; that is where the bulk of the royalties are being generated. The Kimberley ($123.6 million) is also a big recipient, with much of the money being spent on projects linked with expansion of the Ord scheme, while the Gascoyne ($57.3 million) and Goldfields-Esperance ($50.9 million) are also doing well.

Don’t be surprised if Mr Bowler throws his support behind Ms Duncan in Kalgoorlie, which has traditionally been a Labor stronghold.

So the Labor threat on preferences against the Nationals is understandable. It sees up to four nominally Labor seats under threat from the ‘agrarian socialists’, who are buoyed by the success of the royalties program.

Labor must now decide whether to direct preferences away from the Nationals in all seats, or adopt a more flexible policy to cause maximum friction between Liberal and National candidates. It’s a big call.

IF you are counting on next year’s federal and Western Australian budgets being introduced in the favoured month of May, think again all will depend on the timing of the federal and state elections.

The federal poll is scheduled for the second half of next year; that is, if the Gillard government actually serves its full three-year term. The word from Canberra is that Labor will go when it thinks the time is right.

If that happens to be early next year, the budget timetable is almost certain to be hit, even if Labor is re-elected for a third term. The election campaign would impinge on the finalising of key aspects of a Labor budget, including election promises.

If there is a change of government, the coalition parties would require extra time to have their policies reflected as soon as possible. But that would almost certainly mean a delay to possibly as late as September.

June and September are considered the likely months for the next WA budget, depending on the result of the election, set for March 9.

If the Liberal-National alliance is returned in WA, the distraction of the election campaign would mean a delay in the budget, but possibly only by one month.

If Labor regains power, realistically it would want its policies reflected, which would mean more significant changes. They would delay the budget more, possibly until September.

Former Labor leader and treasurer, Eric Rippper, whose eight budgets coincided with some record billion dollar-plus surpluses, says May budgets have merit because all government departments and agencies then know how much money they have for the full 12 months.

“Corrective and reform measures can start on July 1 and apply for the full financial year,” he said. “The alternative with a September budget is for major reforms or cost saving measures to operate for only three-quarters of the year, which is far less satisfactory.”

The man with the furrowed brow at Parliament House is Treasurer Troy Buswell, who is charged with keeping the budget in surplus in the most difficult economic climate the state has faced for years. Former treasurers such as Mr Ripper and Christian Porter look relaxed by comparison.

Mr Ripper bows out next March after 25 years in politics and Mr Porter is concentrating on winning the safe federal Liberal seat of Pearce, whenever Prime Minister Julia Gillard decides to go to the people. Budget issues could not be further from their minds.