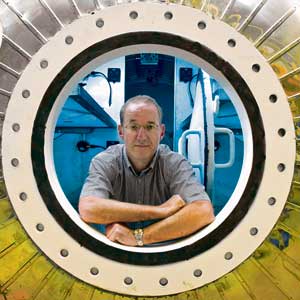 ON TOP UNDERWATER-Doug Austin with one of Divex\'s sub-sea divinf chambers. The company is hoping to boost exports to China next year

The company's first export success was a contract to supply closed-circuit breathing apparatus to the armed forces of the Philippines' anti-terrorist group, and the company has since won contracts in Australia, Vietnam and Japan for similar requirements.

The Fremantle-based Craig Mostyn Group won the agribusiness award for its work as a processor and exporter of fresh pork through its Linley Valley pork division.

The family-owned business, which has been operating for more than 80 years, has been nominated three times for the national award.

"It's a huge recognition of some hard work and some great innovation by a bunch of people over here and for us the recognition goes beyond us, it's also for the whole Henderson AMC complex," he said.

The Australian Marine Complex is a major maritime activity cluster, responsible for constructing some of the state's most significant projects, catering to the oil and gas, resource, marine and defence industries for the past five years.

"We have a lot of sub-contract work down here and a lot of the companies who support us, so the award is on their behalf as well," Mr Austin said.

The award gives the group further opportunity to develop its export market.

"I think we still see opportunities and we certainly will be leveraging off the success of this to try and do more out there," Mr Austin said.

Divex was recently awarded a $10 million contract to build a deep diving system for a Chinese oilfield contractor, after 14 months of research and complex negotiations.

"Our first contract in China, which we'll be delivering in 2009, we see as a bit of a foothold and we're hoping for more work out of China," he said. "We provide the diving systems to allow subsea contractors to go in and do that installation work."

Despite any potential slowdown in the Chinese economy, Mr Austin is confident about this major Asian market.

"I mean if it drops from 9 per cent to 7 per cent, it's at 7 per cent growth which is still a booming economy," he said.

"And apart from China there's still plenty of work going on in the region to capitalise on.

"Malaysia is definitely a target area for us and there's some big contract work being handed out in Malaysia in our industry next year.

"I think we also see potential in Singapore, which is a market we have supplied previously.

"There's a lot of shipbuilding going on there and opportunities to put our diving systems onto some of these vessels being built."

The company is headquartered in Aberdeen, Scotland, and has a global staff of about 370, of which 53 are in Australia. Perth has the majority with 47 staff, while the remaining six are based in Sydney.