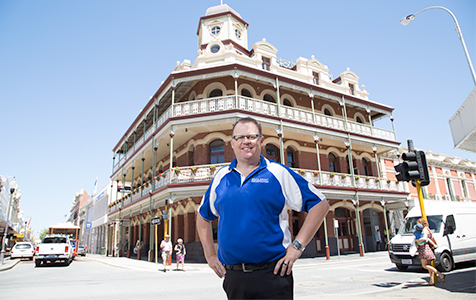 Fremantle's historic National Hotel has reopened its doors after a $3 million restoration carried out by Classic Contractors.

The hotel, which was gutted by fire in 2007, reopened its doors to patrons last weekend as Carnegies Fremantle.

The pub was bought by its current owners, the international Carnegies chain, which has hotels in Perth’s CBD, Hong Kong, Taiwan and China, in June last year.

“When we took over, it was basically a shell, you could look up in the middle of the building and see the sky,” he said.

Mr Stewart said the National Hotel revamp was also a handy boost to the company’s profile, and a good showcase of its capabilities.

The redevelopment took 18 months to complete.

Elsewhere in Fremantle, another rooftop bar has recently opened its doors, on the roof of the old Myer building at Kings Square.

Dave's Cans was designed by David Weir Architects and can fit 300 people. The plan is to use the venue for live music, stand-up comedy and product launches.