Interstate law firms are leading a wave of restructuring in the WA market, with big shifts in the ranking of lawyers in the BNiQ Search Engine. 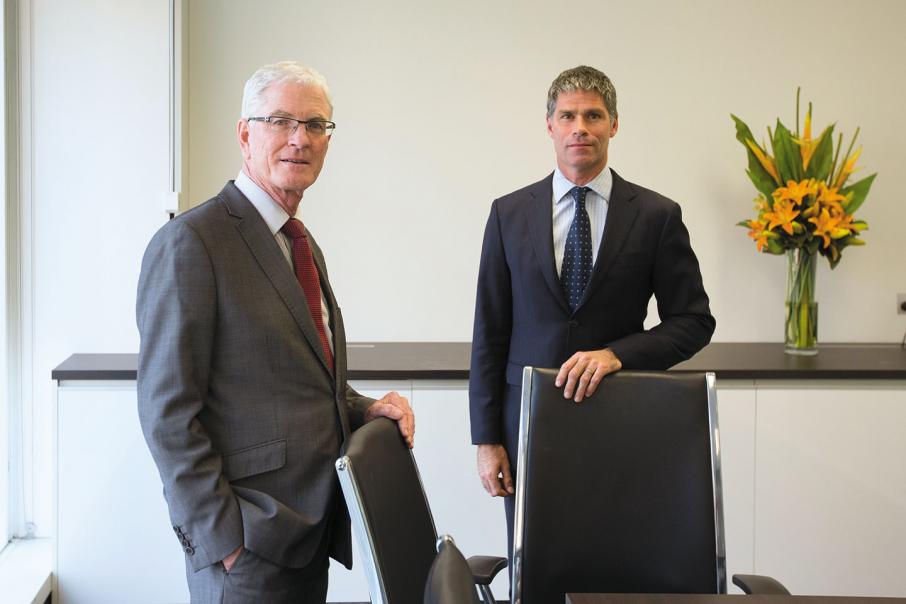 ON BOARD: David McKenna (left) and Julian Atkinson are among the new recruits at Mills Oakley. Photo: Attila Csaszar

Interstate law firms are leading a wave of restructuring in the WA market, with big shifts in the ranking of lawyers in the BNiQ Search Engine.

The likes of Gilbert + Tobin, Mills Oakley, and Sparke Helmore Lawyers are set to be more prominent in Perth as a result of lateral hires and mergers.

Their growth comes at a time when international firms such as Allen & Overy and K&L Gates are refining their strategies in response to the fall in big-ticket projects and corporate deals.

The biggest move shaping up this year is the expected merger of local firm Jarman McKenna with Melbourne-based Sparke Helmore, after the two recently confirmed they were in formal discussions.

The combined firm would have 10 partners and 53 legal professionals focusing on insurance and commercial law, ranking it at number 12 on the BNiQ Search Engine.

It would give Sparke Helmore a substantial presence in Perth, in line with its profile in other states.

Piet Jarman, who co-founded the local firm in 2003, said the insurance litigation market hadbecome increasingly competitive and the merger would expand its services and benefit clients.

The expected merger has not been without some fallout, with Paul Kordic and Hugh Cahill quitting in June to join Cullen Macleod, boosting its partnership to eight.

In addition, Cullen Macleod has promoted Rebecca Conder and Susan Nicholson to principal, having already added Greg Paull to that role in March when he came from Summers Legal.

Separately, Jarman McKenna co-founder David McKenna has moved to Mills Oakley, after one of his major clients advised it would not accept the move to Sparke Helmore because of likely conflict issues.

He is one of five experienced lawyers recruited by Mills Oakley in recent months, with others including new partner Julian Atkinson (ex-Kings Park Corporate Lawyers) and special counsel Andrew Crean (ex-DLA Piper).

Collectively, these changes have expanded Mills Oakley’s Perth practice to seven partners and 34 lawyers, making it the 20th largest law firm in WA listed on the BNiQ Search Engine.

Another national firm that has been busy on the recruitment front is Gilbert + Tobin, which has added three new partners this year.

The latest recruit was Justin Mannolini, who was previously a top corporate finance lawyer at Herbert Smith Freehills before moving eight years’ ago into investment banking with Gresham Partners and Macquarie Capital.

G+T partner Michael G Blakiston said the downturn in the WA market, combined with the strength of the firm’s east coast practice, made it an opportune time to recruit senior lawyers in Perth.

K&L Gates partner Simon Salter said the duration of the downturn was longer than the typical cycle.

“There has been a perfect storm in one sense in Perth because not only has there been a drop in commodity prices, but also a lot of the major resource development projects are coming to a natural end,” he said.

Like many other lawyers, Mr Salter highlighted construction disputes as a growth area, along with workplace health and safety, which he said had been extremely busy right through the boom and the subsequent decline.

London-based Allen & Overy has responded to the downturn by undertaking more offshore work.

Partner Geoff Simpson said the Perth office generated about 40 per cent of its income from international clients, with recent examples being an Asian petroleum project and an African agricultural project.

“It’s the expertise in Perth being exported through our network, and we have good lawyers at very reasonable $A rates,” he said.

Despite the economic headwinds, international law firms are still targeting opportunities in Australia.

EY Law entered the local market through its acquisition earlier this year of tax and estate planning specialist Norton & Smailes.

He spoke to four firms last year before selecting EY, which he said provided a good fit for the kind of services his firm offered.

“We’ve retained a huge amount of the client base,” Mr Smailes said.

The latest entrant to the Australian market is New York-based White & Case, which early this month poached 10 partners from the Melbourne and Sydney offices of Herbert Smith Freehills.