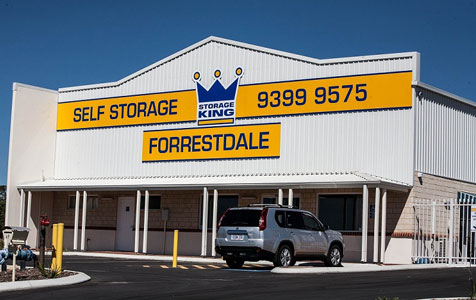 Storage King Forrestdale has been purchased by National Storage.

National Storage is set to add Western Australian property portfolio, buying an existing centre in Forrestdale for $11 million while at the same time acquiring the management rights for a new centre in Mandurah.

The deals, which remain conditional, follow National Storage spending $18.9 million on two Perth properties, in Kardinya and Yangebup, in June.

The Forrestdale asset is part of the Storage King chain, with the first 420-unit stage of development completed in December 2012, and the second stage currently under construction.

It is expected to be completed in December and once finished, the facility will have around 6,500 square metres of net lettable area.

Mr Catsoulis said the acquisition of management rights for a newly-built self storage centre in Mandurah were a first for the group.

“We are looking forward to working closely with the vendor to roll out our management platform at Mandurah, which will build brand awareness for National Storage and deliver on our strategy of developing multiple income streams,” he said.

National Storage will receive ongoing management fees from the Mandurah centre, as well as design and development-related income.

Settlement of both deals is expected in early November.

The Kardinya property, purchased in June, is also under construction and expected to open in early November, increasing the group’s WA portfolio to 14 centres.