Mike Nahan has been tasked with the difficult job of managing the state's finances ahead of May's budget, replacing Troy Buswell as treasurer in a cabinet reshuffle. 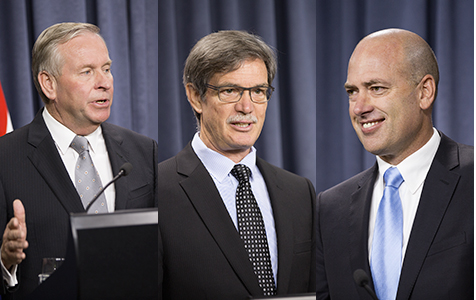 Mike Nahan has been tasked with the difficult job of managing the state's finances ahead of May's budget, replacing Troy Buswell as treasurer in a Cabinet reshuffle.

Dean Nalder will meanwhile take the transport and finance portfolios, in a major promotion for the first-term MP.

Dr Nahan, a former economist and executive director of free-market think tank the Institute of Public Affairs, is likely to bring a conservative fiscal approach to his new role.

He will retain the energy and citizenship and multicultural interests portfolios, but will not retain finance.

“Mike Nahan has proven an excellent member of cabinet and has impressed me with his ability to work through complex financial and logistical matters in the energy and finance portfolios over the past year," Premier Colin Barnett said.

“I believe he will be an outstanding treasurer and I look forward to working closely with him in the preparation of the state budget which will be presented according to the state government’s original timetable.”

The appointment of Mr Nalder as finance and transport minister represents a significant vote of confidence in the first-term MP, who secured a comfortable victory at last year's state election in the seat of Alfred Cove.

“CCI also congratulates Mr Nalder on his appointment and looks forward to working with him as the new minister for finance and transport."

Opposition leader Mark McGowan said Western Australia had been dealt an "unprecedented" revolving door of treasurers under the Barnett government.

“Today’s appointment of Dr Nahan means there has now been 14 changes in treasurer in the past 40 years – with half of them occurring under Mr Barnett," he said.

“There have now been as many changes in treasurer under Mr Barnett in less than six years since 2008 as there has been during the previous 34 years.

“To go through this many changes in such a key office is extraordinary. It is symptomatic of the chaos and dysfunction that plagues the Barnett government."

The cabinet reshuffle was triggered by Mr Buswell's resignation from cabinet following revelations the former treasurer had suffered a psychological breakdown, which resulted in him being hospitalised and transferred to a clinic in Sydney.

The member for Vasse crashed his ministerial vehicle while driving home from a wedding late last month and is reported to have been drinking at the function.

Police continue to probe the events that led to Mr Buswell's car crashing into the gates of his own house, and are also investigating damage to other cars and property in Subiaco.

Ms Turnseck was at the same wedding but is understood to have left several hours before Mr Buswell's fateful journey home.

Questions remain over whether Ms Turnseck told senior members of Mr Barnett's office about the crash in the immediate wake of the incident.

The opposition is demanding a public inquiry into the events to find out whether the government had covered up a crime.

"I don't believe the excuses that are being given and there is significant evidence that needs an inquiry."

May's state budget is shaping to be a challenging one for the Barnett government, which is grappling with soaring net debt and excessive growth in spending compared with revenue.

The government's mid-year financial projections statement forecast a $124 million deficit for 2014-15, with revenue growth expected to be virtually flat.