NZ next stop for Thermomix whizzes 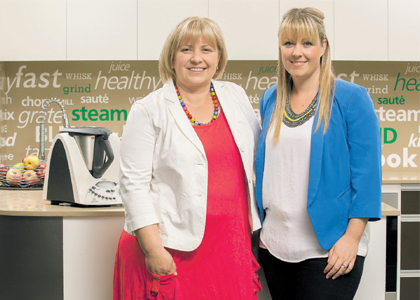 MIXING IT UP: Grace and Bianca Mazur are ambitiously expanding their Thermomix business. Photo: Timothy Herbert

CONVINCING Australia about the merits of what’s potentially the world’s smallest and smartest kitchen appliance has been no mean feat - but the mother-daughter team that has made Thermomix a household name here are taking on the challenge of repeating the process in New Zealand.

Ms Mazur had been working in the mining sector, but took a complete change of course by securing sole distribution rights for the Thermomix product in Australia and New Zealand, and building a business around direct in-home sales.

For the uninitiated, Thermomix is essentially an all-in-one counter-top appliance that measures, mixes, cooks and steams.

“People were looking at us like we were from Mars, because it was so different,” Ms Mazur said of the product’s introduction to Australia.

Anyone who thought the Mazurs were from another planet would think twice now, as the business is making a healthy turnover of $51 million and sales are growing at an annual rate of 50 to 60 per cent.

In 2011, more machines were sold in Australia than in the previous nine years combined - more than 26,000.

It’s that popularity which has prompted Ms Mazur’s daughter, Bianca, to lead the company’s expansion into New Zealand.

“The market is quite similar to Australia in that the key thing is establishing the knowledge about the product.

“What’s interesting is a lot of people travel to Australia and take the message about Thermomix back - it’s at those early stages that having people out there spreading the word really helps.”

Basing the business on direct in-home sales is key to establishing awareness about the product, but once the awareness is in place, Grace said the product did the rest.

“The product has to stand for itself, and these days with social media you can’t get away with much,” she said.

“(But) of all the products out there they can’t stop talking about Thermomix; if we’ve taken someone through that journey they get passionate about it and they want to share that passion with others.”

Bianca is taking a measured approach to the New Zealand expansion; product sales are averaging around 30 per month, with a similar number of consultants.

That’s just the tip of the iceberg, however; the immediate goal is to reach annual sales of 14,000 and build the number of consultants to 900.

Taking on such a challenge could be a daunting task for many 29 year olds, but Bianca’s experience helping her mother build the Australian business has put her in good stead.

“When she came back (from Europe) with the first Thermomix I just wanted to lock myself away and cook everything - mum was winning because I was cooking dinner every day,” Bianca said.

“It was invaluable being in it from the start and starting up the company; I can draw on that now starting up in New Zealand.”

Bianca has also completed studies and work experience in nutrition and dietetics, which has prompted her to produce a Thermomix cookbook based on healthy eating.

The number of consultants selling Thermomix products in Australia has grown to almost 1,600, with half of those added to the team in the past 12 months.

The goal for Australia is to reach annual sales of 35,000 and achieve turnover of around $65 million.

Beyond that, the Mazurs are tight-lipped about their plans; they’re already mentoring distributors in South Africa and Canada but won’t be drawn on what that could mean for the family business.