A joint venture between Perth contractor NRW Holdings and Italian company Salini Impregilo has officially been awarded a $1.17 billion contract for the Forrestfield-Airport Rail Link project, which has an overall budget of nearly $2 billion. 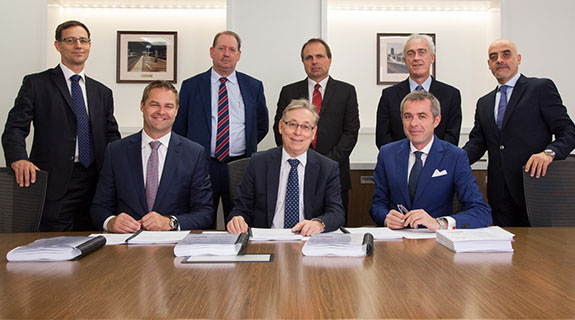 A joint venture between Perth contractor NRW Holdings and Italian company Salini Impregilo has officially been awarded a $1.17 billion contract for the Forrestfield-Airport Rail Link project, which has an overall budget of nearly $2 billion.

Today's announcement was the first time the value of the contract has been disclosed.

In an ASX announcement late today, NRW also disclosed its share of the SINRW joint venture is 20 per cent, with Salini holding the balance.

SINRW will design, construct and maintain the Forrestfield-Airport Link; NRW said that in addition, it would have the opportunity to provide services direct to the project.

Separate to the joint venture's contract, a further $370 million worth of early work, including land acquisition, geotechnical work, contract management, road work (undertaken by Main Roads), and relocating gas works, was already underway on the project.

Premier Colin Barnett said today a recent $490 million payment from the Commonwealth would go towards the project.

“SINRW are contracted to build the eight kilometres of rail tunnels and three stations for the Forrestfield line, as well as maintenance of the tunnel and civil structures for 10 years after completion,” Mr Barnett said.

“This is a huge milestone on the path to delivering this project, which will change the face of Perth’s eastern corridor and give people direct access to the airport by public transport.”

The rail line will be tunnelled underground from a junction near Bayswater Station, under the Swan River and the airport, and out to Forrestfield.

Transport Minister Dean Nalder said the $370 million worth of early work has been underway at Forrestfield since November.

"I expect the joint venture to mobilise on site in the coming months,” he said.

As part of the project, the Airport West and Consolidated Airport stations have been renamed Belmont and Airport Central respectively.

NRW shares went into a trading halt today prior to the announcement.

The joint venture was named the preferred bidder for the contract in February, which sent NRW’s shares surging for several days afterwards.

The share rallies didn’t go unnoticed by the corporate watchdog, the Australian Securities and Investments Commission, which is now investigating possible insider trading among state government staff including those in Mr Nalder’s office and public servants who were involved in the project’s tender process.