Museum gets the nod, other projects deferred 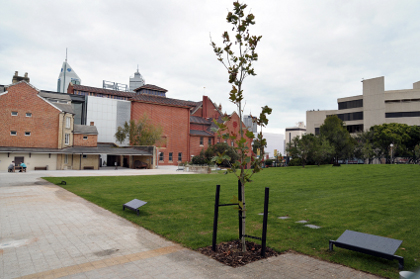 The site for Western Australia's new museum, on Francis Street in Northbridge.

The state government has reshaped its capital works program, with more money to be spent on social infrastructure in the city, including a new museum, but less on regional hospitals, ports and roads.

The big winner is the WA Museum, which has secured a $428 million commitment to replace the demolished building in Northbridge.

The government has also committed to proceed with the long-awaited Mid West Energy project, which will upgrade the electricity transmission network to Three Springs, to link with mining and energy projects in the region. This is budgeted to cost $443 million.

The budget confirmed funding the major stadium at Burswood, the Waterfront development, City Link and the $1 billion Gateway roads project near Perth airport. WA will pay about one-third of this cost and the federal government will pay the balance.

The government also made an initial provision for the redevelopment of Royal Perth Hospital, but did not provide detauils of what services would be retained at the ageing facility.

It has made room for new spending by deferring $1.8 billion of capital works.

The planned Karratha Hospital and the new headquarters for the Agriculture Department in South Perth have been postponed two years.

Fremantle port authority will need to defer $156 million of spending, associated with its bulk jetty at Kwinana and the proposed outer harbor development at Cockburn Sound.

The government has also deferred spending on the South West Highway upgrade, from Donnybrook to Greenbushes, and the Marble Bar road.

The deferral of a planned $339 million injection to the Oakajee port development beyond 2015-16 also contributed to the savings.

That is the same amount it planned to spend in the current financial year, however, under-spending by various agencies means that figure is now expected to be $6.8 billion.