The aquatic mystery of the Kimberley has been brought to the surface in the online interactive documentary Beneath the Waves. 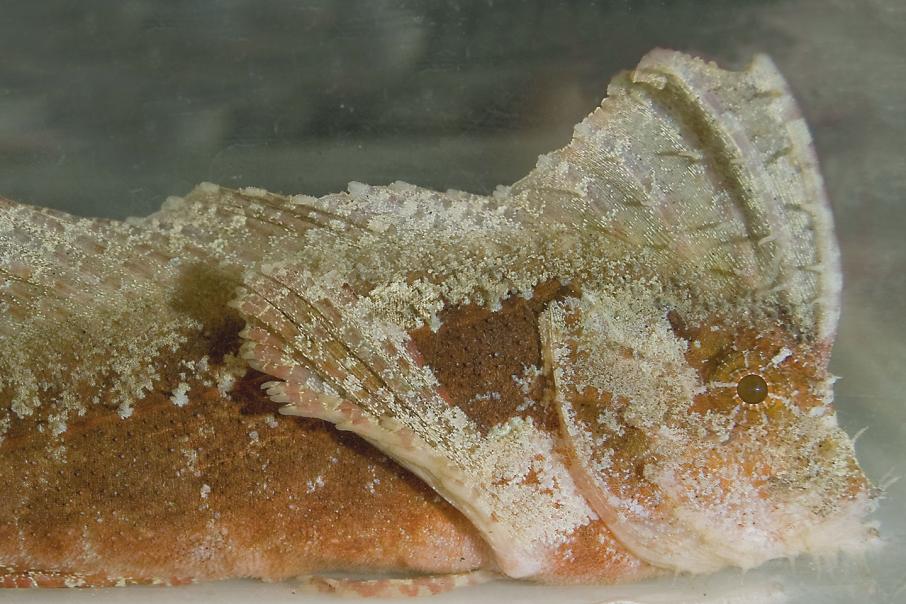 DISCOVERED: A new species of the Bearded Velvet fish was found on shallow reefs in the Kimberley. Photo: Western Australian Museum

The aquatic mystery of the Kimberley has been brought to the surface in the online interactive documentary Beneath the Waves.

Huge tides, opaque water, cyclones, and an abundance of crocodiles, among other challenges, have put the scientific exploration of the Kimberley coast’s marine biodiversity beyond the reach of many organisations over the years.

However, a team from the Western Australian Museum has waded into this daunting environment, collating fieldwork from six years of research in concert with production company Periscope Pictures and interactive experience developer, Hungry Sky.

The result is the online documentary Beneath the Waves, which was named best interactive production at the prestigious WA Screen Awards last month.

“Beneath the Waves not only provides a unique platform to share this specialised research, but also gives everyone a front-row seat to this spectacular region … to discover one of the most mysterious marine environments on earth,” Mr Coles said.

Scientists from Curtin University, the WA Herbarium, and the WA, Australian, Victorian and Queensland museums were chosen for their expertise across eight animal groups and marine plants.

“As the researchers used scuba diving the depths ranged from zero to 30 metres and the result of this technique was a quantitative inventory of marine life at every station surveyed.”

Mr Bryce said a single field trip was undertaken each year, each lasting two weeks, one per year, with one hour spent at each station to ensure the sampling was consistent.

“This length of time also correlated well with how long the scuba tanks would last the divers. This meant researchers dived for a combined total of 2,740 hours over the six years,” he said.

The Kimberley’s geographical importance for WA’s entire marine ecosystem, and potential to contribute to the until-now limited literature and research coverage of the area were highly appealing aspects of the project for the scientists involved.

“To determine what species occur there informs the study of marine species and habitats along the whole Western Australian coast.”

A smorgasbord of fish, molluscs, crustaceans, echinoderms, soft and hard corals, worms and sponges, as well as algae and seagrass were collected and examined during the project.

“Yet, marine organisms survive and flourish in this place, many of them adapting to these extreme conditions and some even evolving into new species.”

One such example of this discovered during the project was a fish with camouflage abilities and a beard-like organ.

“The Bearded Velvet fish was found on shallow reefs at Adele Island and Montgomery Reef and previously only one species was known from Queensland,” Mr Bryce said.

“So not only has a new species been found, we also didn’t know this genus occurred in the Kimberley.”

More than 600 micromolluscs, a tiny mollusc less than 5 mm long, were recorded during the project – another species that was previously unknown to occur in the Kimberley region.

New records were also formed for algae and seagrass flora.

Despite the completion of fieldwork, ongoing research is taking place in a laboratory, where detailed comparison to other specimens is under way to determine and differentiate new species.

Mr Bryce said the project would be of lasting value to numerous parties other than marine enthusiasts and the museum.

“All the scientific information provided from this project forms critical baseline data for decision making by conservation managers, government departments, industry and the public in determining how to manage this amazing resource,” he said.

“This has great value as we progress into an uncertain future where bleaching events, ocean acidification and changing weather patterns associated with global climate change may be impacting the Kimberley.”

Beneath the Waves can be accessed via the WA Museum website.

The Australian public has been invited to create biological history by naming a new creature found by a Museum researcher.

The Museum in conjunction with ABC Radio National’s environmental science program, Off Track, is running a competition to name the discovered species that has ice blue sausage-like extensions covering its back.

Museum department of aquatic zoology senior research scientist Nerida Wilson found the nudibranch, a type of sea slug, while diving off the coast of the North West.

“It was 16 years ago on a trip to Dampier when I first saw it, and I knew it was different to all the other nudibranchs straight away,” Dr Wilson said.

“But it’s taken all these years to actually get the time to scientifically confirm that it is a new species… now all we need is the name.”

Dr Wilson said it was one of the weirdest creatures she had ever seen and believed this would spark interest and entries in the competition.

“We are asking people to listen to Off Track and watch a video about the unnamed nudibranch, the first film ever captured of the creature in its natural environment, and to send in their best idea,” she said.

“There are so many things it could be named and I can’t wait to hear what the public comes up with.”

Entries close August 15 and can be submitted via the Museum’s website.