The Western Australian Museum Foundation is in the final stages of establishing governance and investment structures to support what it hopes will be the largest cultural endowment fund in Australia. 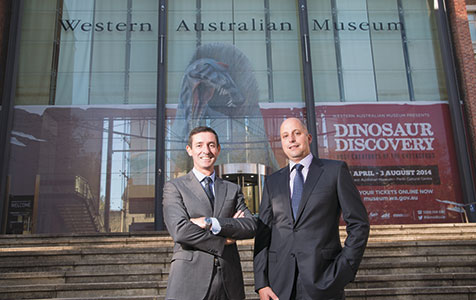 The WA Museum Foundation is in the final stages of establishing governance and investment structures to support what it hopes will be the largest cultural endowment fund in Australia.

The foundation was set up as a separate fundraising entity to the museum in 1995, but chair Justin Mannolini told Business News it had been on something of a hiatus until 2012, when the state government committed $428 million to build a new museum.

“It’s really only been with the state government’s commitment to deliver on a new museum project that the foundation has really undertaken a revitalisation program to get back on the front foot and to start really thinking about its own ambitions in terms of fundraising,” Mr Mannolini said.

As part of that revitalisation process, Heiko Plange, who joined the foundation as director, has initiated work to establish an endowment fund, which he hoped could reach $50 million.

The fund would differ from current fundraising models – centred on corporate sponsorship, donations and in-kind giving – in that it would seek to perpetually draw on bequests and donations.

In the 2012-13 financial year the foundation received contributions worth $1.3 million, which the museum can draw on to supplement government funding and patronage revenue.

The amount from donations was a $300,000 increase on the 2011-12 financial year, which Mr Mannolini said was largely attributed to a one-off donation.

“It’s only now that we’re putting the machinery together to be able to solicit that sort of gift on a more systemised basis,” he said.

“Historically (donations) have been coordinated, but it’s been ad-hoc.”

In Australia, endowment funds are more commonly found at universities, but Mr Mannolini said there was no reason the Western Australian Museum could not follow in the footsteps of global cultural institutions that had established endowment funds.

He pointed to the Smithsonian Institution in the US as an example; in 2012, its endowment fund surpassed $US1 billion with investment returns of 8.2 per cent.

Mr Mannolini said the foundation wanted to grow the endowment to a point where it could fund the foundation’s operations, support the museum with significant cash injections, and continue to grow through investment returns.

As a first step, he said, this involved establishing strong governance to provide confidence to community donors and high net-worth individuals.

“If your ambition is to create one of, if not the leading cultural endowment in the country, then you can only do that if you’ve got robust governance and management in place,” Mr Mannolini said.

“It’s certainly a commitment on the part of the board to be able to put your hand on your heart when you approach people – particularly those at the high net worth end – and say that we have a world-class governance and investment management structure.”

Mr Mannolini, who is also executive director of Macquarie Capital, said establishing those structures and up-skilling the board took time, but he was pleased with progress so far.

“We’ve been happy with the expressions of interest that we’ve had in joining the board and we think that we’ve been very lucky with putting together a board that is appropriately credentialed in this space,” he said.

The next stage involves approaching potential donors to discuss the endowment concept and begin collecting funds, which Messrs Mannolini and Plange were confident were available.

Mr Plange said there would be a lot of discussion with community stakeholders to ensure the endowment operated in a way that satisfied all involved.

Increasing competition for philanthropic funds did not appear to be a concern for the foundation, however, as Mr Mannolini said the museum had a good reputation.

“The museum holds an almost egalitarian position in terms of a cultural institution in WA,” he said.

“There is an element of competition and there are a multitude of good causes that people could donate to, but the level of wealth in WA has increased as well.”

Meanwhile, Mr Plange said the museum continued to receive support from the corporate sector in terms of sponsorship, which had been maintained despite business caution about the state of the economy.

Woodside Petroleum has been a partner since 1998 and has recently helped fund the museum’s ‘Marine Life of the Dampier Archipelago’ exhibition.

Andrew and Nicola Forrest’s Minderoo Foundation is also a strong supporter, as are Rio Tinto, Alcoa of Australia and Singapore Airlines.