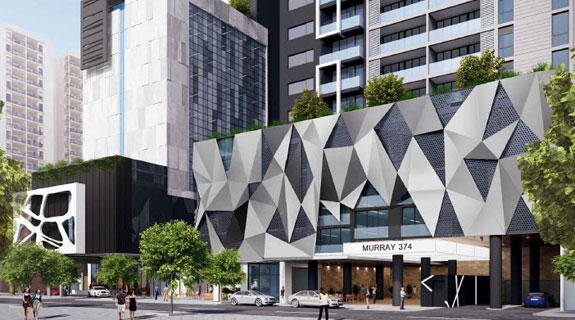 Singapore’s Fragrance Group has won approval for a massive apartments and hotel complex on Murray Street,  despite the City of Perth recommending it be refused planning approval.

The proposal entails a two-tower project at 374-396 Murray Street, comprising a 33-level building containing 401 apartments and a 28-storey, 487-room hotel.

The project also has a significant frontage to Shafto Lane, which would provide an enhanced pedestrian link through to Wellington Street.

City of Perth development assessment panel documents indicate the project would have a base construction cost of $130 million.

However, Fragrance Group had been initially expected to have to reassess its plans, after the City of Perth’s planning officers have recommended the project, designed by Perth-based Scanlan Architects, be refused for planning approval .

Reasons for the recommended refusal included the proposed building height not being in line with the low scale of buildings in the surrounding area and the ground floor plan not being appropriate to enhance the public realm for pedestrians. An artist's impression of the Fragrance Group proposal.

Previous development approvals for the site consisted of a 14-level office tower and a 32-level apartment building on the site, which is currently a Wilson Carpark.

Fragrance Group purchased the plot from Westbridge Property Group in July last year for $40 million, a deal brokered by JLL.

The Singaporean developer is also progressing plans for another hotel and apartment project on Milligan Street, on a site it bought from Georgiou Capital late last year for $30 million, with the transaction also brokered by JLL.