Muja to be fixed and then sold 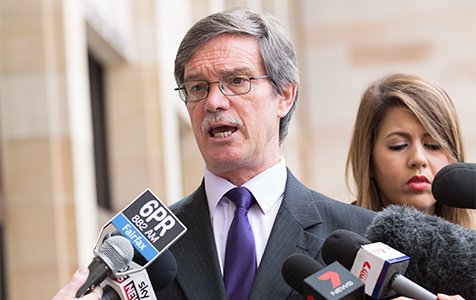 Energy Minister Mike Nahan has announced the state government will complete its refurbishment of the Muja power station, at which point it will seek to sell at least half of it.

Mr Nahan said an independent review by KPMG had found selling the project would allow the government to break even on its total expected $336 million expenditure, and represented the best value for taxpayers.

"We got independent advice ... and it clearly shows that the best thing for West Australian taxpayers is to complete the project, de-risk it, get it up and operating and sell down at least 50 per cent," Mr Nahan said.

"I've been advised that over the period of 15 years it will more than break even and that it will cover all the expenditure, capital and operating costs incurred on the project."

The latest Treasury papers from August, which stated anticipated total costs were $331 million, up from a February estimate of $252 million, also revealed the government could sell a 50 per cent stake in the power station during the 2014-15 financial year.
The new total cost is $336 million, which includes $46 million to complete the refurbishment.

Mr Nahan said the project had been hampered by unexpected expensive engineering fixes, including replacing rotted tubes within the boiler, which had gone unnoticed until Verve tried to restart the plant in July last year.

He said Muja would be put on the market only when the refurbishment was complete and the plant was operational.

"The best way to entice a private investor in this is to complete the project (and) de-risk it. I might add it is a low-cost energy producer," Mr Nahan said.

He said the review had found refurbishing Muja and selling it would generate more than $50 million for the state, a far cry from the original $240 million net profit over the life of the project it had hoped to make.

"The advice is the best return to the state in the vicinity of $50 to $70 million dollars, an impressive value, is to go ahead, complete the project and sell down either in full or part of the joint venture, and that's what we're doing," Mr Nahan said.

He said that, in hindsight, the government wouldn't have chosen to refurbish the plant.

"We did not adequately understand the risks that Verve was taking, the inadequacy of the joint venture partner, and more importantly that there was some rotten boiler tubes ready to blow," Mr Nahan said.

"It's blown out quite significantly, no doubt, and we're trying to make the best of it."

He admitted there had been lessons learned.

"Be very, very careful with your due diligence, particularly when you're operating with very old, ancient kit," Mr Nahan said.

"The lesson is government shouldn't get in bed with off-balance sheet transactions of this nature. And that we have to do a large amount of due diligence to the joint ventures that we enter into in the private sector.

"Verve is changing by the way. And, all I can say is that all the advice provided to me from Verve I will double, triple check."

Opposition leader Mark McGowan has previously called for a public enquiry of the Muja project.