Mount Gibson Iron has moved to establish a logistics base on Koolan Island, in partnership with Qube Holdings, to service the offshore oil and gas industry. 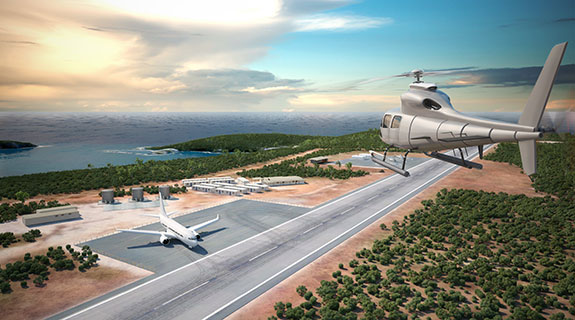 An artist's impression of the Koolan Island Logistics Base.

Mount Gibson Iron has moved to establish a logistics base on Koolan Island, in partnership with Qube Holdings, to service the offshore oil and gas industry.

The company has engaged Qube Holdings to provide a framework for the staged development of helicopter refuelling and maintenance facilities, air search and rescue facilities, an all-weather runway with the capacity to support large-scale passenger jets, a deep-water marine terminal, and accommodation facilities on the island that is home to its mothballed iron ore mine.

In a move it considers a good opportunity to realise value from its existing assets on Koolan Island, Mt Gibson said the location was favourable for the establishment of the facilities given its close proximity to both potential and proposed offshore oil and gas developments in the Browse Basin. It said the Koolan Island Logistics Base would also have the potential to support further economic development of Derby as a major regional centre.

It would be in close proximity to the Broome Supply Base, which is jointly run by MMA Offshore and Toll Holdings and supports oil and gas explorers in the area including Apache Corporation, ConcoPhillips, BHP Billiton, Santos, Shell and Woodside Petroleum.

“In partnering with Qube to progress the base, Mt Gibson is working with an organisation with extensive specialist logistics expertise,” Mt Gibson said.

The company also said development of the base wouldn’t restrict the potential to repair the iron ore mine’s main pit seawall, which collapsed in November last year, and resume production if an economically robust solution was found.

Mt Gibson expects helicopter and aircraft services to be possible within 12 months of a decision to proceed.

It follows news last week that Perth-based AusGroup’s Melville Island port redevelopment project in the Northern Territory was being investigated by the federal government amid claims its environmental impact hadn’t been assessed.

The deep sea port project was being built in an area listed as significant to wildlife, and a loophole in planning laws allowed it to be constructed without the NT environment minister signing off on the project.

Mt Gibson shares lost about half of their value when the seawall failure was announced to the market last year, but have since been hovering around 20 cents a share.