Mr Bob puts the pieces together

After decades in construction, Robert Williams is building a new business, piece by piece. 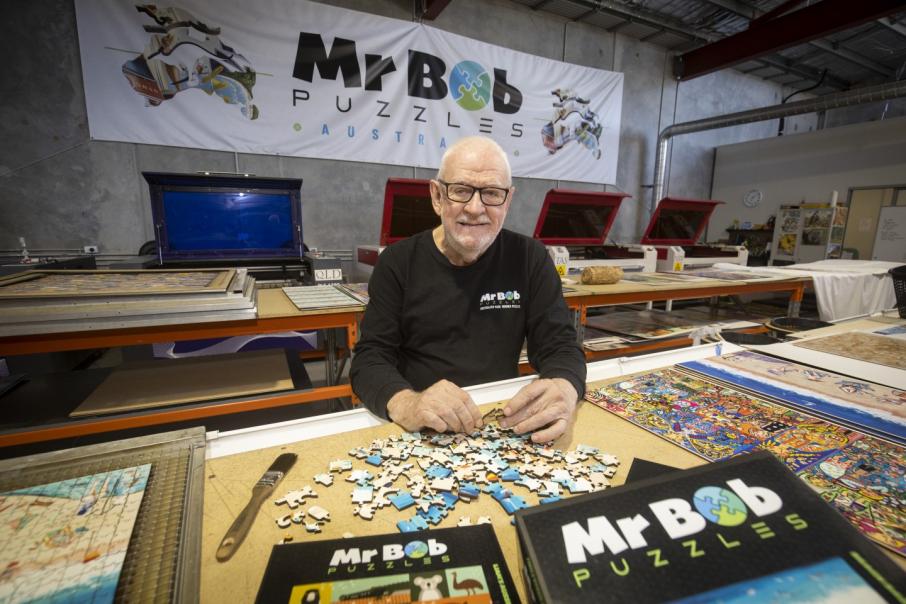 He may be just a few months shy of his 80th birthday, but businessman, entrepreneur, builder, artist and (now) jigsaw puzzle maker Robert Williams says he has lots still to achieve.

“Doing this? No way in the world.”

While creativity and visionary flair are part and parcel of many an entrepreneur’s toolkit, Mr Williams insists he never dreamed he would be heading his own puzzle factory.

However, a look at his varied and eventful career suggests it was only a matter of time before Mr Williams’ 30 years’ experience in the construction industry, pursuit of innovation, and life-long affinity for art converged in a single project.

Mr Williams joined the construction industry at the age of 16, with his first job as a draftsman.

Having developed a love of art early in life, it was unsurprising this dovetailed with an appreciation of the work by renowned architects Frank Lloyd Wright and Harry Seidler.

In his 30s, Mr Williams turned his attention to owning his own business, founding commercial building company Interstruct Holdings.

Mr Williams is perhaps best known for spearheading the construction of Perth’s iconic 43-storey QV1 tower, a project that would afford him the opportunity to engage Mr Seidler to design the building.

As busy as he was with Interstruct, Mr Williams retained a keen enthusiasm for outside pursuits. He acquired a significant art collection during this period and became the first private owner of the Perth Wildcats.

That run of success came to a sudden stop in 1991-92, however, when Interstruct collapsed amid a wider downturn in the sector.

Mr Williams headed offshore and spent the next 20 years working in the construction and property development sectors in Asia and the Middle East.

Gradually, he was drawn back to artistic pursuits during those years overseas, and in 2010 started exploring the world of digital art.

“I was intrigued by that, so I began doing a bit of research,” Mr Williams told Business News.

“What staggered me was the amount of information about the health benefits of jigsaw puzzles.

“From all ages up, puzzles have the ability to teach project management skills, organisational skills; there is evidence that they even help to ward off Alzheimer’s disease.”

Mr Williams was also aware of the fact that the toy industry, of which jigsaw puzzles were a part, created huge revenue worldwide ($US90.7 billion in 2020).

Eager to get involved, he started a company and began producing cardboard puzzles in South-East Asia, but it soon became clear the project was not economically sustainable.

Desperate to keep the business and continue producing puzzles, Mr Williams turned his attention to other materials, investigating wood and how to transfer the image onto the board.

As an ex-builder who had spent much of his young life watching his father turn wood on a lathe, Mr Williams said it made sense to utilise a material with which he was familiar and comfortable.

That research laid the foundation for Mr Bob Puzzles and prompted the evolution of the company’s production system, allowing it to remain competitive in the international market and ship Australian-made puzzles overseas for the same price the customer would pay in their home country.

The real test for the company came in mid-2020, when Mr Bob Puzzles received a corporate order of a size that underwrote the development of its Bibra Lake factory, at a time when most businesses and international exporters were grappling with the economic impact of COVID-19.

In December, the company completed a contract to design and manufacture 53,000 custom wooden jigsaw puzzles for a major Australian corporation.

The task was a puzzle in and of itself, with Mr Williams and his small team having to purchase and install 10 large laser cutters, recruit more than 20 staff, and cut 8 million jigsaw pieces in just four months.

Ms Gobey, the former owner of an industrial design company, was brought in to help design the original wooden puzzle, but later appointed full time to handle the logistics of the operation when the corporate order came in.

Completing the contract was not without its challenges, with the shipping of vital equipment delayed and the business having to work within a stringent COVID-19 safety plan.

However, Mr Williams said negotiating those hurdles was made easier with the support of suppliers and tradespeople eager to do what they could to ensure the business’s success.

The job was completed on time and on budget.

By default, Mr Bob Puzzles had become the largest jigsaw puzzle manufacturer in Australia. Mr Williams said he was proud of the fact the company was able to build manufacturing capability during a global pandemic.

To some degree, though, COVID-19 and lockdown restrictions enacted in response had a hand in the growth in demand for games, with even Prime Minister Scott Morrison providing some free advertising when he called jigsaw puzzles an “essential” lockdown item in March last year.

By the end of March 2020, when most of the country was in lockdown, market research company The NPD Group reported that sales in Australia’s toy industry had grown 69 per cent, with games and puzzles sales growing by 417 per cent.

Mr Bob Puzzles is now exporting wooden jigsaw puzzles across the country and to customers in the UK, Romania and the US, but Mr Williams said the business had its sights on becoming a major exporter internationally.

“We’re only fledgling,” he said.

“Currently, the wooden part of the business is only 15 to 16 months old. “What we’re offering is a unique, durable, Australian-made product.

“The world is our oyster.

“We want the company to be a major exporter of jigsaw puzzles to the US and Europe, and we’d need to tap into that market to financially sustain our operations.

“But we want to be a major player in Australia, too.”

The business is also working to engage on a community level. Last month, Mr Bob Puzzles signed a partnership agreement with the National Breast Cancer Foundation to produce a personalised puzzle and donate a portion of the proceeds.

Remaining innovative and setting itself apart in the global market has become a major focus for the business, with Mr Williams and Ms Gobey refining the product, its packaging and presentation, and offering personalised puzzle pieces scented with aromatherapy essential oils (the only company in the world to do so).

Mr Bob Puzzles is also now experimenting with an acrylic hybrid product, as well as looking at competition-grade puzzles and working with an indigenous Australian artist collective with the goal of having indigenous art represented in its collection.

Mr Williams continues to work more than 40 hours a week, and he doesn’t see why that should change.

“People ask me when I’m going to retire, but I really can’t come to grips with the concept,” he said.

“In our society, it seems such a shame that we decide that a person’s use by date is 65 and that after that you’re superfluous or redundant.

“You spend so much of your working life acquiring all of this knowledge, you should share it.”