New housing developments in Perth and the state’s regional centres will increase the potential for future outbreaks of mosquito-borne diseases, a leading entomologist says. 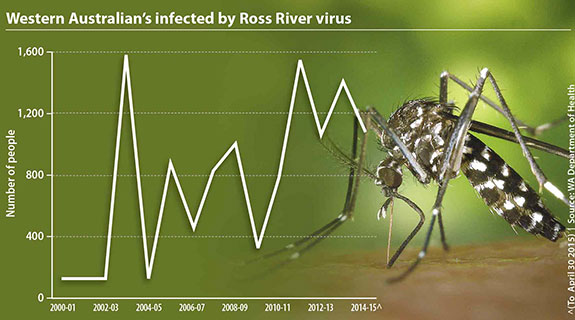 New housing developments in Perth and the state’s regional centres will increase the potential for future outbreaks of mosquito-borne diseases, a leading entomologist says.

Peter Neville, a medical entomologist with the Department of Health, said diseases such as Ross River virus became more prevalent as the human population grew into previously natural environments.

“As we develop land, lots of people want to live very close to waterways because of the scenery ... but these are natural mosquito breeding habitats, so I suppose as we develop more housing in close proximity to waterways potentially we’re putting a greater number of people at risk,” Dr Neville said.

More than 1,400 Western Australians contracted Ross River virus last financial year, and more than 1,000 have succumbed to the painful mosquito-borne infection so far in FY2014-15, according to the department’s research.

In addition, across 28 field sites spread over the top two thirds of the state are groups of ‘sentinel’ chickens, which form part of the joint research efforts between the department and the University of Western Australia.

The chickens are constantly checked to see if they are carrying antibodies in their blood for the rare Murray Valley Encephalitis or Kunjin disease from mosquito bites.

“The chickens, because they’re related to migratory birds, work well for Murray Valley Encephalitis and Kunjin; it doesn’t work well for Ross River where the natural host animal is a kangaroo or possum and it’s very hard to have sentinel kangaroos,” Dr Neville said.

Other programs working with local government were minimising outbreaks by monitoring and using helicopters in the state’s South West to drop larvicide into waterways to kill mosquito larvae.