The expansion plans for Perth’s major shopping centres are gaining momentum, with Scentre Group’s Westfield Carousel, Westfield Innaloo and Westfield Whitford City likely to be the first to start work, near the end of 2016. 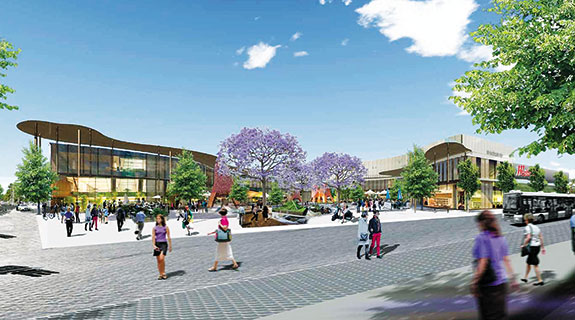 BIG CHANGE: The proposed expansion at Carousel will incorporate a main street-style plaza.

The expansion plans for Perth’s major shopping centres are gaining momentum, with Scentre Group’s Westfield Carousel, Westfield Innaloo and Westfield Whitford City likely to be the first to start work, near the end of 2016.

In a presentation to investors last month, Scentre Group said it was still undertaking pre-development activity on the expansions, which are collectively valued at $1.12 billion.

However, Business News understands discussions with prospective contractors have been active for around nine months.

All three of the expansion plans received development approval from relevant planning authorities at some stage during the past 12 months.

At Whitford City, Scentre Group is planning to add 27,000 square metres of retail space to its existing mall, while the Innaloo and Carousel plans comprise an extra 62,750sqm and 47,108sqm, respectively.

Along with the retail space, up to 740 apartments or townhouses are proposed for Whitford City, while the Innaloo proposal will cater for up to 500 apartments.

North-west of the city, plans are in train for the redevelopment of Karrinyup Shopping Centre, with owner AMP Capital understood to have a shortlist of two builders to carry out the work.

AMP Capital is expected to decide between Brookfield Multiplex and Lendlease within three months, according to sources, however design and engineering work is expected to take around 12 months, with the redevelopment likely to begin in mid-2017.

AMP Capital declined to comment when contacted by Business News regarding its tender process for the $600 million redevelopment. The developer is also planning a $750 million revamp at its Garden City Booragoon and has partnered with TRG Properties to provide 122 apartments on an adjoining site.

Apartments are also a part of the Karrinyup plan, with plans for 150 apartments to be developed in the first stage of the revamp.

AMP Capital is yet to announce a development partner for the Karrinyup apartments.