Developer Golden Group and the Town of Victoria Park are making significant progress at Belmont Park, taking steps towards marketing the first apartments at the racecourse by late this year or early next year. 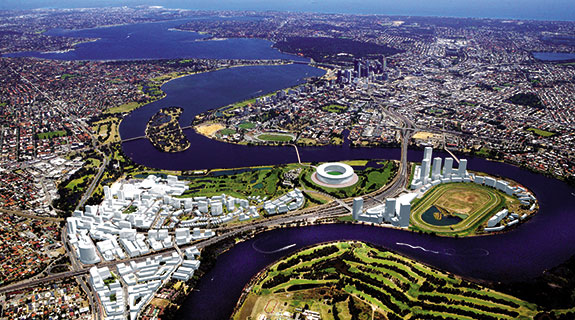 SCALE: The 30-year vision for the Burswood Peninsula is a bold plan.

Developer Golden Group and the Town of Victoria Park are making significant progress at Belmont Park, taking steps towards marketing the first apartments at the racecourse by late this year or early next year.

The Town of Victoria Park last week released a detailed area plan for public comment, asking ratepayers and residents for their views on the planning guidelines for the first precinct of the Belmont Park development.

The guidelines allow for between 977 and 1,500 apartments, 20,000 square metres of office space, 3,800sqm of retail space, a hotel and public open space at an area known as Precinct D, on the south-eastern side of the racecourse, close to the Belmont Park train station.

Golden Group managing director Andrew Sugiaputra said the developer had been working with architects at Hassell to create a statement building for the first phase of development at Belmont Park.

Mr Sugiaputra said a unique aspect of the project was that significant retail and hospitality facilities were being master-planned alongside high-density apartment buildings.

“We would like to try to lift the design aspect of apartment living in Perth up another level, but we’re still working hard to create efficiencies with builders and smart design that will translate into lower building costs,” Mr Sugiaputra told Business News.

“Hopefully we’ll be able to pass that onto the public as well to make it affordable.”

Mr Sugiaputra said a development application for the first stage would be lodged as soon as the public consultation period was wrapped up, with an aim for marketing to begin late this year or early 2016, subject to approvals.
“The intention is to go to market in the near future,” he said.

“We are working at our own pace, we’re not being dictated to by anyone, but significant progress has been made with the collaboration with the Town of Victoria Park.

“I’m pretty happy with the outcome and I think the guys at the council and the independent design review committee are doing a great job.”

Belmont Park is one of three neighbourhoods making up the Western Australian Planning Commission’s long-term plan for the Burswood Peninsula.

Over the next 30 years, 12,500 apartments, 250,000sqm of commercial space and 65,000sqm of retail facilities are expected to be built at Belmont Park, around Burswood Station and at The Springs.

“The Burswood Peninsula will be transformed to become the premier entertainment precinct of Perth, probably akin to the Southbank of Melbourne,” Mr Sugiaputra said.

“We’re in the right location, but we’ll let the market decide whether our pricing is right for the product we are offering.”

A large-scale development at Belmont Park has been in the works since 2007, when Perth Racing, then known as the Western Australian Turf Club, first flagged a residential and tourism precinct at the racecourse.