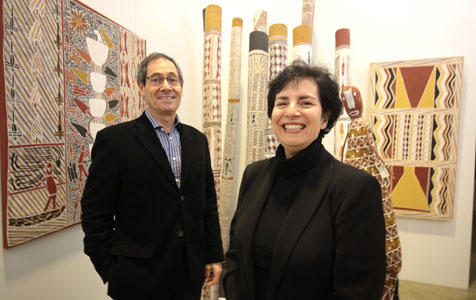 Diane and Dan Mossenson at their Subiaco gallery, which will be vacated to provide space for a fledgling artist's collection.

One of Perth’s longest running private art businesses is restructuring to turn its main gallery space into a proposed artists’ collective, citing a crisis in the sector as rivals close their doors.

Mossenson Galleries, which focuses on Aboriginal works via its Indigenart operation, will relocate from its Subiaco premises to Mount Hawthorn, offering the Hay Street property to foster fledgling collective Art Cooperative WA.

Diane Mossenson, who founded the business 20 years ago with her lawyer husband, Dan, said the closure of several well-known galleries had left many established artists without traditional outlets to display their works.

“Their representative galleries are closing down, they are retreating to studios and being left to their own devices,” Mrs Mossenson told Business News.

“We thought they should have their own cooperative. We are instigating that.”

Mrs Mossenson said there were various reasons behind galleries’ decision to close. In some cases property values and the potential for development squeezed out the art business, which was sometimes run by owners who no longer had energy to devote to it or a succession plan in place to provide for an orderly hand over.

In addition, she said the market was tough, with national artists coming to Perth and populist styles attracting buyers away from established local names.

Mrs Mossenson cited the impending closure of Galerie Dusseldorf after 37 years as the most recent of five galleries that have or will close in a 12-month period.

By shifting its operation to Mount Hawthorn, Mossenson Galleries will have considerable space for storage and will be able to exhibit. It also has galleries in Fremantle and Melbourne.

By restructuring the business, Mrs Mossenson said she and her husband could restart plans to launch their Mossenson Art Foundation, which was aimed at publishing, education and supporting occasional non-commercial art shows.

The foundation will not be connected to the planned cooperative, which will need to be commercially focused and require funding of its own to become established.

Ms Johnston said the Mossensons had been very generous providing the gallery space for the short term to help kick start the cooperative.

“They have given us three months’ access to the space to find the philanthropic and government support we need,” she said.

Mrs Mossenson described the initiative as intended to empower local artists. It had been promoted for some months but had not yet attracted the attention from funding bodies required to move from concept to reality.

“The challenge for the collective is to convince the people of Perth to put money into it,” she said.

“We just decided the other day that we can’t wait for all the boxes to be ticked, let’s see what the public thinks.”