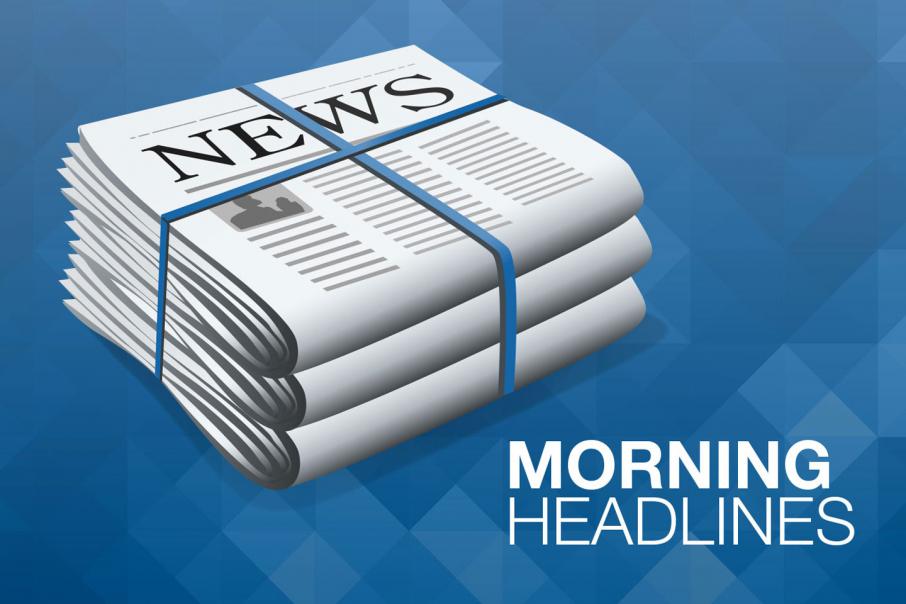 Just a handful of dodgy tax structures being used by Australians cost tens of millions of dollars in lost revenue, according to the Australian Taxation Office. The Fin

Australia’s most senior public servant, Martin Parkinson, has delivered a veiled warning that Australia will see Trump-lite populism unless we restore faith in big businesses and the rich, and develop better economic policies. The Fin

Telstra will slash $1 billion in costs, retreat from Asia and invest in its core Australian business as it moves to fill a $2 billion to $3 billion hole in earnings when the national broadband network rollout finishes in 2020. The Fin

Senior Rio Tinto executive Alan Davies has declared war on the company over his sacking from his $3.5 million-a-year job, in the latest instalment of the mining giant’s festering Simandou iron ore corruption scandal in Guinea. The Aus

Barnett winded by worst jobless figures in the country

Western Australia has the highest unemployment rate in the nation, 6.5 per cent, while NSW has posted its second successive month with a jobless rate below 5 per cent. The Aus

BHP Billiton chief executive Andrew Mackenzie says China’s economy is showing “strength and resilience” and that its determination to restructure its steel and mining industries is driving demand for Australia’s two biggest exports, iron ore and coal. The Aus

Mineral Resources boss Chris Ellison has blasted proxy advisers and the institutional shareholders who “blindly” follow their advice after the company had its first-ever strike against executive pay. The West

Page 1: The federal government has warned it is impossible to guarantee no-one will be worse off as a result of economic reforms as it moves to place more emphasis on fairness following the election of Donald Trump.

Former Rio Tinto energy and minerals boss Alan Davies has vowed to drag the mining giant through the courts after he was sacked amid an investigation into payments to a political consultant in Guinea.

Page 3: Just a handful of dodgy tax structures being used by Australians cost tens of millions of dollars in lost revenue, according to the Australian Taxation Office.

One of the nation’s largest law firms has appointed a prominent competition lawyer to lead it in the toughest, most competitive time that the legal services market has seen.

Page 4: Everyone in the foreign exchange markets knew the code. ‘‘A large Asian central bank is buying,’’ meant intervention by the People’s Bank of China.

Page 5: An astounding surge in full-time jobs last month has kept the jobless rate steady at a 3 1/2-year low of 5.6 per cent and undermined doomsday claims the economy wasn’t creating enough ‘‘real work’’ for Australians.

Page 6: Australia’s most senior public servant, Martin Parkinson, has delivered a veiled warning that Australia will see Trump-lite populism unless we restore faith in big businesses and the rich, and develop better economic policies.

Page 10: The construction industry may be forced to renegotiate agreements and pay higher wages because of retrospective conditions in a building code that is part of the federal government’s proposed industrial relations changes, an industry specialist has warned.

Page 11: An industrial row between the militant construction union and the Australian Workers’ Union threatens to ratchet up labour costs on the billion-dollar WestConnex infrastructure project.

Page 15: Education doyen Glyn Davis says the sector needs a radical rethink to prepare for a generation of students who think a university degree is a waste of time.

Page 16: The strong rally in equities in developed economies in response to Donald Trump’s pro-growth mantra has given the President-elect the benefit of the doubt over the risks he poses to the world economy.

Page 18: As India’s economy continues to reel from Prime Minister Narendra Modi’s shock treatment of demonetisation, there is little sign of business as usual. The withdrawal of 85 per cent of paper currency is having a flow-on effect, hitting precious metals such as diamonds and gold.

The Philippine economy grew at its fastest pace in more than three years between July and September, most of President Rodrigo Duterte’s first 100 days in office, setting him up to meet the ambitious target he set for the year.

Page 19: Telstra will slash $1 billion in costs, retreat from Asia and invest in its core Australian business as it moves to fill a $2 billion to $3 billion hole in earnings when the national broadband network rollout finishes in 2020.

BHP Billiton chairman Jac Nasser says the world economy will face ‘‘complete trauma’’ if US President-elect Donald Trump goes through with a threat to impose large tariffs on Chinese products entering the US.

One of Australia’s most renowned investors has branded US President-elect Donald Trump’s pledge to ‘‘Make America Great Again’’ as ‘‘vacuous’’ and ‘‘frightening’’ in the context of China’s rising economic might.

Page 21: Billionaire media and energy magnate Kerry Stokes has said Donald Trump’s ascension to the White House may create some initial teething problems, but ultimately Australia could benefit from the new regime.

Page 22: Mineral Resources chairman Peter Wade and managing director Chris Ellison have told investors if they don’t like the mining services company’s executive pay structure they should leave its register, after a strong first ‘‘strike’’ was recorded against its remuneration report.

Morgan Stanley has questioned whether Big W is a liability, rather than an asset, given the troubled discounter’s long-term lease obligations are estimated to be worth $2.5 billion.

Page 23: The federal government’s slated fee regime for superannuation funds will have a ‘‘devastating impact’’ on the venture capital and private equity industries if implemented without modification, according to the Australian Private Equity & Venture Capital Association.

HSBC will open a private bank in Australia for the first time to target wealthy customers whose companies already use HSBC’s corporate or retail bank, in a move that could pluck clients from prominent investment banks.

Page 31: Cash has begun to move again, as investors bet global growth and corporate profits will rise, while inflation expectations surge to a 12-year high, according to this month’s fund manager survey conducted by Bank of America Merrill Lynch.

Page 34: Stuart Fuller, one of the key architects of the bold Chinese strategy of the now global behemoth that is King & Wood Mallesons, is preparing to end his term as managing partner by yearend. His departure comes at possibly the most perilous time for the powerhouse firm: its European and Middle Eastern arm is facing crippling debt in the tens of millions and bleeding top partners from its tie-up with SJ Berwin three years’ ago.

Page 1: Senior Rio Tinto executive Alan Davies has declared war on the company over his sacking from his $3.5 million-a-year job, in the latest instalment of the mining giant’s festering Simandou iron ore corruption scandal in Guinea.

Page 2: Australian home owners in regional areas are falling behind in their mortgage repayments at a faster rate than city property owners as a result of rising unemployment in the country and the end of the mining boom.

Western Australia has the highest unemployment rate in the nation, 6.5 per cent, while NSW has posted its second successive month with a jobless rate below 5 per cent.

Page 4: Malcolm Turnbull has slammed Labor for its “posturing” over budget repair, blaming Bill Shorten for undermining the nation’s AAA credit rating, while naming economic fairness as the key lesson from the US election.

Rio Tinto, long the bluest of bluechip companies, finds itself mired in a corruption scandal over how it was able to secure a fabulously large iron ore project in the jungles of the Simandou Mountains, in the historically corruption-challenged west African nation of Guinea.

New Business Council of Australia president Grant King has issued a fresh rallying call to big business to be willing to “step up’’ to make the case to the community for critical reform that will make Australia “a better place to live’’.

Page 20: Miners and academics have committed more than $1 million to a scholarship scheme designed to avert a looming skills shortage in a resurgent resources sector.

Page 23: Banks should stop complaining about regulation and instead reinvest more in their businesses rather than pay out most of their profits to shareholders, the global central bank has urged.

Page 24: The government in Taiwan has approved a $US1.9 billion ($2.5bn) relief package for the country’s loss-making container shipping companies to prevent a collapse similar to that of Korea’s Hanjin Shipping.

Page 26: A resounding 40 per cent of Goodman Group shareholders have voted against the company’s remuneration report, prompting chairman Ian Ferrier to criticise proxy advisers for influencing institutional investors too strongly.

Charter Hall Group has increased its holding in the listed Charter Hall Retail REIT (CQR) to near 18 per cent in a sign that it will guard against a possible takeover bid from another shopping centre owner, SCA Property Group.

Page 28: Rolls-Royce faces pressure on earnings from new accounting rules and weak demand even as its chief executive, Warren East, said he was ready to start planning the long-term future of the British aircraft engine maker.

Page 3: Unemployment in WA is the worst in the nation, with the highest number of people in a quarter of century looking for work.

Page 7: The WACA has called for $175 million in State Government funding to go towards a $207 million redevelopment — a bid put to the Government and Opposition ahead of next year’s State election.

Page 11: Families with health cover could be hit with premium increases of up to $250, as Health Minister Sussan Ley vows to crack down on insurers trying to gouge their members.

Page 15: A WA honey farmer is seeking millions of dollars in damages from one of the State’s biggest pollen producers, claiming a shipment of diseased pollen led to the loss of more than 100 hives.

Page 17: Fremantle’s West End has been added to WA’s heritage register in what is believed to be Australia’s biggest listing.

Page 61: Mineral Resources boss Chris Ellison has blasted proxy advisers and the institutional shareholders who “blindly” follow their advice after the company had its first-ever strike against executive pay.

Page 62: Pizza Hut has bought the troubled Eagle Boys pizza chain and begun converting stores with its own branding.

The board of Empire Oil & Gas saw off a challenge from dissident shareholders at yesterday’s annual meeting, but took a few hits along the way.

Page 63: The Australian Taxation Office is cracking down on promoters and trustees who dodge tax by artificially allocating taxable income to beneficiaries paying little or no tax.

Telstra’s future strategy, laid out at its investor day in Sydney yesterday, can be summed up in three words: mobile, mobile, mobile.

Page 64: Automotive Holdings Group has lost more ground, with analysts’ reviews sending its shares to a 12-month low ahead of an expected weak trading update at today’s annual meeting.