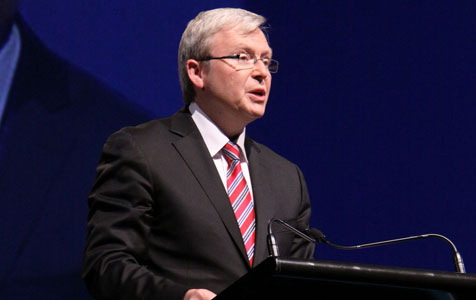 LABOR is facing a parliamentary veto over its attempt to cut the carbon price next year as the Coalition and the Greens savage the new plan and challenge Kevin Rudd's vow to ease the cost of living for families. The Aus

ANGRY electricity and mining companies have launched a scathing attack on Kevin Rudd's handling of the carbon tax, warning that "schizophrenic" policy change was damaging Australia's reputation among foreign investors. The Aus

The Federal Government is under pressure from the car industry to dump a $1.8 billion increase in fringe benefits tax needed to cover its overhaul of the carbon tax. The West

Coalition may back WA energy

Taxpayers' money could help underwrite projects that burn household rubbish to produce electricity after the Federal coalition put its weight behind the contentious technology. The West

The federal government’s shock removal of tax breaks for cars is expected to dramatically cut – if not kill off entirely – the business of salary-packaging companies that rely on the benefit to sell packaged vehicles. The Fin

RIO Tinto's second-quarter iron ore shipments were hit harder than expected by a conveyor outage and Pilbara rains, the miner has revealed in a production report that has been received well but is expected to weigh on first-half earnings forecasts. The Aus

LABOR will use new data to launch a class-war assault on Tony Abbott's paid parental leave scheme, telling women in the poorest suburbs and regional areas that they are subsidising rich women in North Sydney and upmarket Mosman. The Aus

SOME of the nation's biggest companies fear proposed new rules on workplace bullying could force them to monitor the Twitter and Facebook use of employees, potentially exposing the companies themselves to bullying claims by workers. The Aus

Page 1: The automotive industry has warned it faces severe damage from the government’s decision to cut fringe benefit tax concessions by $1.8 billion for salary-sacrificed vehicles, to help pay for the $3.8 billion switch from the carbon tax to a floating price.

The federal government’s shock removal of tax breaks for cars is expected to dramatically cut – if not kill off entirely – the business of salary-packaging companies that rely on the benefit to sell packaged vehicles.

Coal-fired power generation companies say a $3 billion cut in assistance to the industry will put investments and debt financing at risk.

Page 3: Former Labor climate change minister Greg Combet has been touted as the next chairman of the $18 billion Cbus superannuation fund to replace Steve Bracks, who has been appointed Australia’s Consulate-General in New York.

Page 6: The government’s year-by-year breakdowns of when the savings will be delivered show the new carbon plan is still slightly revenue negative by 2015-16.

About $200 million in funding for carbon capture and storage projects will be delayed and another $24 million cut, a decision which has split the environmental movement.

Page 8: Toyota has backed industry fears that tougher rules on fringe benefit tax will have a major impact on the car market, as industry heavyweights warn of a “devastating effect” on the sector at large.

Page 10: People arriving in Australia by boat will find it harder to be declared refugees under a plan that could be announced by Prime Minister Kevin Rudd as early as Friday.

Developing the capability to pathology and diagnostic imaging results in personal electronic health records will be funded under an $8 million pledge by the Rudd government, but without a guarantee the pathology sector will cooperate.

Australia’s cigarette plain packaging laws could be challenged during negotiations for an Asia-Pacific free-trade agreement this week.

Page 11: University heads have named a proposed $2,000 cap on self-education expenses for tax deductions as their chief concern in discussions on funding cuts with the federal government.

Qantas Airways has sealed a $7 million deal with the Northern Territory to promote international and domestic tourism, taking its total alliance spending with states and territories to $49 million.

Page 13: The minutes of the July meeting of the Reserve Bank board have dampened expectations of future interest rate cuts and pushed the Australian dollar up.

Fallen coal baron Ric Stowe has failed in his last-ditch bid to reclaim his Griffin Coal assets in Western Australia that were seized by administrators in 2010 and on-sold to an Indian energy company.

Shareholders in Billabong International will have to hand over as much as 40 per cent of the troubled surfware company in a refinancing deal and management changes aimed at resolving its debt problems once and for all.

Page 17: Rio Tinto’s expansion project remains on-track but the global miner’s half-year result is predicted to come under pressure from royalty payments and charges relating to a wall collapse at its United States based copper mine earlier in the year.

Lion chief executive Stuart Irvine has backed plans for a voluntary grocery industry code of conduct but has warned it could take years before the code reaches a format satisfactory to retailers and suppliers.

Page 18: The parent company which makes the big-selling Vegemite brand and Cadbury chocolate in Australia has generated a handsome 64 per cent increase in net profit to $74.9 million in its latest ­financial year.

The capacity of the new News Corp’s local pay TV assets to generate significant earnings growth has been called into question, with a weak consumer environment and a mature sector dampening subscriber growth.

One of the world’s leading experts in the regulation of high-frequency and algorithmic trading has warned of the risks to investors from the rapidly changing structure of equity capital markets.

Page 22: Singapore Airlines’s strategy of boosting flights to Australia to compete against the new Qantas Airways/Emirates alliance on European routes has resulted in a price war that could damage the financial performance of all of the carriers.

Page 38: Residential vacancy levels continued to rise in June, amid an oversupply of stock in some markets and a move to home ownership in others, according to SQM Research.

Page 40: The global head of accounting firm BDO International expects greater consolidation among small and mid-tier firms, and is positioning his brand to be among those leading the charge to absorb others and grow its global base.

The Australian Taxation Office is intensifying efforts to make tax practitioners file client returns on time, as it increases reliance on advisers to help boost compliance.

Page 1: LABOR is facing a parliamentary veto over its attempt to cut the carbon price next year as the Coalition and the Greens savage the new plan and challenge Kevin Rudd's vow to ease the cost of living for families.

LABOR will use new data to launch a class-war assault on Tony Abbott's paid parental leave scheme, telling women in the poorest suburbs and regional areas that they are subsidising rich women in North Sydney and upmarket Mosman.

FOUR asylum-seekers are dead after an asylum boat carrying about 150 people sank north of Christmas Island as Customs and Border Protection crews were trying to assist it.

IN a rush to spend as much money as possible in marginal seats, the Rudd government has given surf lifesaving clubs 72 hours to apply for funds for "shovel-ready" projects to be announced before the election campaign.

Page 2: SOME of the nation's biggest companies fear proposed new rules on workplace bullying could force them to monitor the Twitter and Facebook use of employees, potentially exposing the companies themselves to bullying claims by workers.

Page 3: THE job market for graduates just out of university has yet to recover four years on from the financial crisis.

Page 4: GROWING hopes for an interest rate cut took a beating yesterday as minutes from the Reserve Bank’s deliberations this month revealed concern that the dollar’s sharp fall could cause inflation, and emphasised the ‘‘ substantial degree of monetary stimulus’’ already in place.

THE dark side of Labor Party rank-and-file preselections has re-emerged with allegations of branch stacking in the fight to succeed Peter Garrett in the Sydney seat of Kingsford Smith.

NEW car sales are set to plummet, businesses are facing increased compliance costs and hundreds of thousands of taxpayers will be punished to the tune of $1.8 billion as a result of changes to the fringe-benefits tax system introduced yesterday by the government.

THE early abolition of the carbon tax will make bringing the budget back to balance in 2015-16 more difficult, with the benefits from the savings package not flowing fully until the following year.

LABOR'S plan to accelerate the introduction of an emissions trading scheme with a much lower projected carbon price will leave most Australians with "carbon tax compensation" up to five times greater than the expected increase in the cost of living.

Page 17: SURF, skate and skiwear group Billabong has agreed to a debt refinancing deal that will effectively see control of the company handed over to US private equity group Altamont while pushing out chief executive Launa Inman after just 14 months in the role.

ETIHAD Airways has moved to increase its stake in Virgin Australia and declared it is prepared to buy more shares if the price is right, setting the scene for more activity on the Australian carrier’s crowded share register, which already includes some of the biggest names in n global aviation.

PIPELINE operator APA Group has continued its aggressive acquisition strategy, lobbing a $ 1.3 billion bid for the two- thirds of gas distributor Envestra it does not already own in a drive f or greater size and scale.

SHARES in the country’s biggest salary packager, McMillan Shakespeare, tumbled 15 per cent yesterday ahead of the Rudd government’s vaunted crackdown on car FBT benefits, while the second- biggest warned the sector would struggle to survive if the measures were enacted.

Page 18: RIO Tinto's second-quarter iron ore shipments were hit harder than expected by a conveyor outage and Pilbara rains, the miner has revealed in a production report that has been received well but is expected to weigh on first-half earnings forecasts.

ORICA boss Ian Smith has finally expressed concern over an expected export- driven surge in east coast gas prices, signing a deal with Cooper Basin coal- seam gas player Strike Energy to fund up to $ 52.5 million of exploration and development in return for a potential 20- year supply of cheap gas.

PALADIN Energy has backed itself to deliver continued improvements from its suite of African uranium mines as it looks to turn around its mixed record of recent years.

GLENCORE Xstrata has called time on its $ 80 million experiment to juice up returns at its Ernest Henry copper- gold mine near Cloncurry in northwest Queensland by also producing magnetite — the low- grade iron ore, which hosts the copper and gold mineralisation.

Page 19: MACQUARIE Group has been rebuffed in its bid to seize control of a $500 million portfolio of Gunns managed investment schemes, with a court finding that material provided to investors for a vote on the change in control was misleading and deceptive.

LABORATORY testing group ALS is set to significantly expand its exposure to the oil and gas sector in a $ US533 million ($ 586.5m) deal that is double the size of any previous transaction it has done.

SHARES in Treasury Wine Estates were hit by another wave of selling yesterday after analysts downgraded the stock in the wake of a $ 160 million writedown related to its US business.

GRAINCORP chief executive Alison Watkins has told a Senate inquiry that her role is not to scrutinise the international corporate conduct record of global agribusiness giant Archer Daniels Midland when considering its $ 3billion takeover bid.

Page 23: CHINA'S growth slide is having a knock-on effect on other economies in the region, the Asian Development Bank said yesterday as it cut its forecasts for Asia for this year and next by 0.3 percentage points.

INVESTMENT banks are eyeing the opportunities around the carbon trading market after the federal government moved to bring in an emissions trading scheme earlier than planned.

MINING giants have launched a rearguard action against tax changes to stop foreign multinationals from loading up their Australian subsidiaries with debt, which they warn will undermine their ability to bankroll projects here.