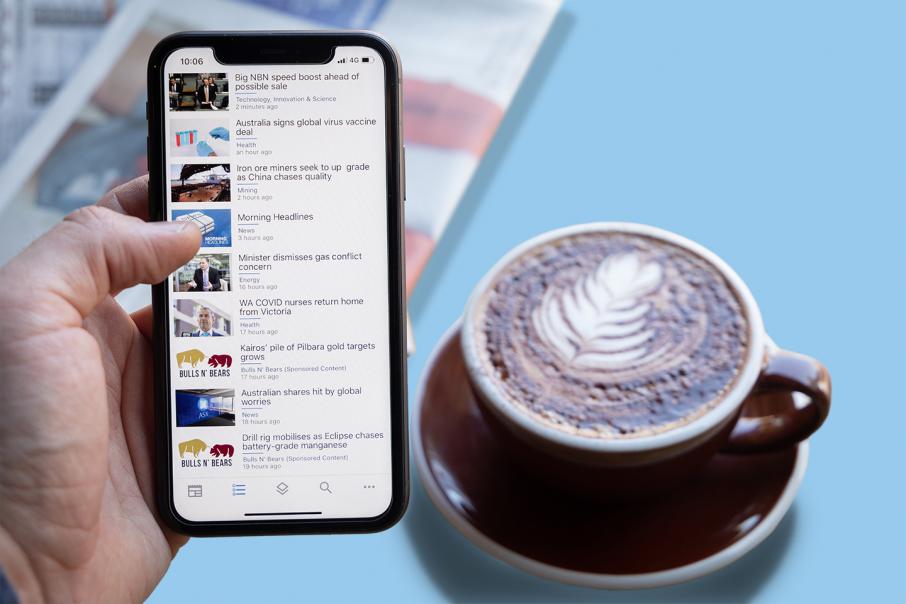 Page 1: The federal government will spend at least another $1.9 billion to vaccinate Australians against the coronavirus but otherwise, the era of big spending to combat the pandemic is over, Prime Minister Scott Morrison says.

Page 3: Former Westpac executive Rob Whitfield has risen to become Australia’s most powerful director based on the market cap of the companies whose boards he sits on, marking a new breed of director as Lindsay Maxsted, David Gonski, David Murray and Gordon Cairns exit top roles.

Andrew Forrest has the world’s biggest petrochemical companies in his sights as his philanthropic Minderoo Foundation prepares to name and shame those it considers are ruining the oceans and posing a threat to human health.

Page 4: Gig economy workers such as Uber Eats delivery riders will be entitled to a minimum wage and other basic terms and conditions under a policy proposal to be released soon by federal Labor.

Page 12: America is not even ‘‘close to meeting demand’’ for rare earths and critical minerals supplied by a growing raft of US and Australian mining companies as Washington and carmakers accelerate the shift towards electric vehicles and renewable energy.

Page 15: Reddit mania has cast an unlikely shadow over what would otherwise be the start of a sparkling Australian earnings season this week, as it dawns on professional fund managers that a dedicated retail investor army is now calling the shots on Wall Street and sending hedge funds racing for cover.

Page 17: Importers have called on the federal government to investigate the socalled ‘‘congestion’’ fees being charged by shipping lines on goods brought into Australia, claiming they could put local companies out of work.

Page 18: Chevron has warned production will be reduced this year at both its huge LNG projects in Western Australia as maintenance shutdowns and technical problems impact the $US54 billion ($70.6 billion) Gorgon project and the $US45 billion Wheatstone venture.

Ryan Stokes has no regrets about the sale of iron ore assets to focus on a salt project on the West Australian coast that has attracted $450 million in finance from the Morrison government.

The Australian digital edition was not available at time of posting this.

Page 1: WA health authorities believe a man who tested positive for COVID-19 at Fiona Stanley Hospital at the weekend is an “historic case” and is unlikely to pose a threat to public health.

Page 4: A five-day “full lockdown” has been imposed on more than two million people across Perth, Peel and the South West after COVID-19 escaped hotel quarantine in WA, sparking scenes of chaos and delaying the start of the school year.

Daily testing of hotel quarantine workers — which may have detected an infected security guard days ago and prevented the far-reaching lockdown — only came into effect on Friday, three weeks after the safety measure was agreed by National Cabinet.

Page 7: Perth’s social scene was halted in its tracks last night, with bars, pubs, restaurants, cinemas and the casino forced to shut their doors at 6pm — with an uncertain immediate future stretching ahead of them again.

Parents have been urged to look out for signs of anxiety in their children after the start of the new school year today was put on hold as part of the lockdown measures.

WA travellers who had flown interstate were being ordered into isolation last night in a dramatic turning of the tables after the State’s 10-month COVID-free run ended.

Page 9: The shortcomings of the State’s much-vaunted Safe WA system have been brutally exposed, with Perth pub goers openly admitting they were not bothering to scan in at venues.

Page 17: Mobile point-to-point speed cameras will be tested in WA for the first time in an effort to arrest an alarming rise in road fatalities.

Business: Australia’s worsening relationship with China is a bigger long-term threat to WA’s economy than the financial fallout from the pandemic, Mark McGowan has warned after talks with Beijing’s top diplomat in Perth.

Building resilience, gaining trust and shifting to decarbonisation are among the top tasks facing Australian miners this year.

A WA energy expert believes he has found the solution to a looming multibillion-dollar dilemma facing the world’s oil and gas giants as their ageing offshore rigs reach the end of their production lifespans.