More to footy than chasing a Sherrin

If other codes’ recent TV rights deals are anything to go by, the AFL could be in for a significant revenue growth. 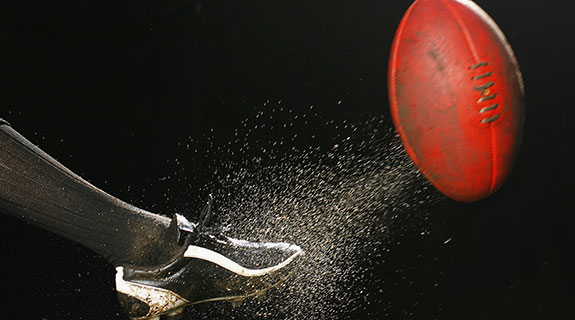 LOVE IT: Whether at the ground or on the couch, footy fans are key to the AFL’s commercial success. Photo: iStockphoto

If other codes’ recent TV rights deals are anything to go by, the AFL could be in for a significant revenue growth.

To many people, football is a game that evokes passion, tribal loyalty and rivalry, with the intensity of the on-field contest often mirrored in the enthusiasm of the fans in the stands.

But there’s much more than mere sport at stake as season 2015 gets under way; Aussie Rules is a commercial enterprise, and if a recent analysis is correct, it could actually be Australia’s best business.

Morgan Stanley, one of the world’s top investment banks, reckons that the Australian Football League is sitting on a gold mine, thanks to the popularity of the game and the prospect of an enormous increase in the price it can charge for television rights.

According to a study of what the AFL currently gets paid, and what it can expect in future seasons, the cost of telecasting football could have a significant effect on the profitability of broadcasters such as Seven West Media.

The Morgan Stanley view is that, not only will it cost a lot more to acquire AFL television rights from the 2017 season onwards, but the total fee could have a significant effect on the annual profits of Seven West, leading to an underweight (sell) tip on the stock.

Using recently renegotiated television rights to other sports in Australia and overseas, the bank believes the cost of broadcasting AFL games will rise by between 40 and 70 per cent, which, when combined with increasing competition, caused the bank to cut its 12-month share-price target for Seven West from a previous of $1.70 to $1.20 (less than the stock’s latest sales at $1.44).

Morgan Stanley has previously explored the cost of AFL to Seven West but revisited the topic this week after news that the TV rights to the English Premier League soccer competition had risen by 70 per cent, with media companies agreeing to pay $10 billion (£5.1 billion) for a three-year contract.

“That’s a big increase, but as we demonstrate the CAGR (compound annual growth rate) of 11 per cent is not out of line with major TV rights deals such as the US NBA basketball deal signed in late 2014 (around a 13 per cent CAGR) and the last few rights deals signed in Australia,” the bank said.

Examples of big increases in Australian sports include a 15 per cent per cent CAGR for rugby league television rights and 20 per cent for cricket.

Morgan Stanley is assuming a 40 per cent increase for Seven West if it strikes a fresh deal with the AFL, but doesn’t believe this is yet reflected in consensus numbers for Seven’s future profits.

While Seven West does not reveal precisely what it pays for AFL rights, the bank estimates the annual cost to be around $95 million. If the English soccer deal increase of 70 per cent is applied, then the annual cost for an AFL deal would rise to around $160 million.

For its financial calculations, Morgan Stanley assumes a new contract with the AFL can be negotiated with a 40 per cent fee increase, though the 70 per cent would “actually be broadly in line with the observable TV sports rights inflation seen in Australia for the past 20 years and it would be below the two most recent other top-tier sports rights (cricket and rugby league)”.

Seven West is not alone in facing a profit squeeze courtesy of the AFL with pay TV (Foxtel) also facing higher costs, and that’s when the earnings power of Aussie Rules becomes quite interesting.

The current full deal for television rights to its games generates an estimated $250 million a year for the AFL under a year deal running from the 2012 season to 2016 – or $1.25 billion for five seasons.

And that’s the key point. How many other businesses in Australia are planning for a revenue increase of between 40 per cent and 70 per cent over the next five years?

‘Not many’, is the correct answer.

Another aspect to the Morgan Stanley assessment of Seven West is a financial phenomenon that not many people have heard of – over-earning.

For most people in business, the concept of earning too much, which is essentially what the bank is saying of Seven West sounds ridiculous; and perhaps it is.

The theory behind over-earning is that it can occur when one participant in a competitive business significantly outperforms its rivals, causing them to lift their game.

“An important part of our underweight thesis on Seven West is that we believe its TV business (as well as newspapers) is over-earning relative to peers, and that this is unsustainable,” the bank said.

“But, the fact remains these are declining media businesses, which should continue to endure lower earnings and falling asset values,” the bank said.

Getting bums on seats is another important aspect of sport, be it in the stands or, from a commercial perspective, in the comforts of a corporate box.

And it is who has access to the latter’s relative luxury that has caused the government agency, Healthway, a few problems recently, leading to the resignation of its chair, Rosanna Capolingua, and several board members earlier this week.

According to an audit of Healthway there have been too many private beneficiaries of what is a taxpayer-funded luxury.

Disregarding the question of whether any government body should spend taxpayers’ dollars to entertain friends and relations at a sporting event, there is scope to ask whether management of stock exchange-listed companies are guilty of the same sin.

One view is that there is a world of difference between a government agency spending taxpayers’ money on attending a football game, and a public-owned company doing the same thing.

Another view is that there is no difference if the privilege is being abused and people in a corporate box, which has been paid for with shareholders’ funds, are the family and friends of the company’s senior executives.

What the government audit of Healthway and its sporting interests has done is raise an issue that the auditors of public companies might take a closer look at, if only to warn management that the lid has been lifted on imprudent spending of other people’s money.