There aren’t many places in Western Australia that live up to the superlatives in tourism brochures, but touring the Gibb River Road is one experience that comes close. 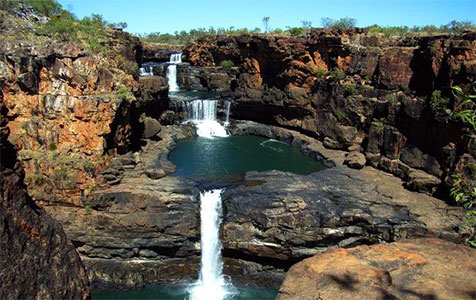 There aren’t many places in Western Australia that live up to the superlatives in tourism brochures, but touring the Gibb River Road is one experience that comes close.

It also involves a lot of tough driving on heavily corrugated dirt roads, and having no telephone or internet connection for the duration, which is a good thing but takes a bit of getting used to.

The most spectacular attraction is Mitchell River Falls, which is also the hardest to reach. My favourites included Bell Gorge, Tunnel Creek, Galvins Gorge and Barnett River Gorge, which were all very different. Some were rugged and rocky, others more like a lush oasis.

The changing landscape was another highlight – flat grasslands with boab trees near Derby, the Leopold Ranges further inland, forests with tall grass trees as we headed north, and the spectacular Cockburn Ranges near El Questro in the East Kimberley.

The most satisfying experiences were often those that caught us by surprise – like visiting a gorge that barely registered on the map, and having the place almost to ourselves so that we could enjoy the quiet serenity.

Conversely, Mitchell River Falls was a little underwhelming because it had been hyped so much by other travellers we met earlier.

Having aeroplanes and helicopters flying overhead on a frequent basis also detracted from the experience, but it was still worth the drive.

One of the biggest surprises was the number of vehicles on the Gibb River Road.

Our first stop was at Windjana Gorge, about 120 kilometres from Derby.

There were dozens of caravans, camper trailers and tents at this site, and a constant stream of people walking though the gorge.

Even remote places like Mitchell River Falls attracted many other travellers. So don’t come here expecting to escape the crowds, at least not during school holidays.

The Gibb River Road is 665km long, from Derby to near Kununurra, but you need to travel much further to see most of the attractions.

We travelled about 1,300km to El Questro. The extra kilometres came from long detours along the way.

Bell Gorge is 29km from the main road, Tunnel Creek is 50km, Dimond Gorge – which we didn’t go to – is 100km and Mitchell River Falls 240km from the road.

These side trips are often very slow because of the poor road conditions. An extreme example was Barnett River Gorge, which was only 4km from the main road but took about 15 minutes. That road was so bad it was actually fun – it’s the repetitive corrugations on other roads that were tedious and tiring.

One of the realities up here is that road conditions are highly variable and unpredictable.

The Gibb River Road itself was pretty good in most areas – at least by remote Kimberley standards.

The initial 90km is mostly bitumen, courtesy of the mining companies active in the area. On the dirt, we were able to cruise comfortably at 80km/h for long stretches, but just when we started to enjoy the smooth ride we would hit another heavily corrugated section.

And that may last for 500 metres or 20km – you would never know. The frequent floodways, river crossings and dips in the road also slowed progress.

The long distances, the stop-start driving and the expensive petrol make for an expensive combination – unleaded petrol was $2.50 per litre at Mt Barnett Roadhouse.

The road conditions were mainly determined by how recently a grader had gone through.

Our drive to Mitchell River Falls, for instance, was much quicker than we had expected, mainly because the Kalumburu Road had just been graded.

We had been told the 240km drive from Gibb River Road to the falls would take at least a day, possibly 1.5 days. But in our case it took only five hours.

It’s worth noting that not only are the roads unpredictable, so is the weather.

We’ve had some cool, rainy weather, which explains why we booked into a very small room for a night at the ‘donga’ motel at Mt Barnett Roadhouse, with Ted taking up half the room.

One final comment … Drysdale Station is a gem that all travellers in these parts should visit.

It has a wonderful bar and restaurant under lush, shady trees – an oasis in the harsh terrain.

And it has a blackboard with all of the important news, like AFL, NRL and World Cup results, to help us cope without internet access.

See more of Mark's journey on his blog: http://markbeyerontheroad.wordpress.com/