The state government has flagged more asset sales after its mid-year budget update confirmed deepening financial problems, with the annual deficit worse than expected and state debt tipped to reach an unprecedented $39 billion. 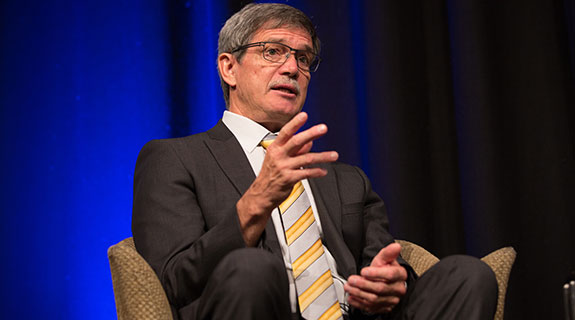 The state government has flagged more asset sales after its mid-year budget update confirmed deepening financial problems, with the annual deficit worse than expected and state debt tipped to reach an unprecedented $39 billion.

Treasury’s mid-year financial projections statement has revised up the 2015-16 deficit to $3.1 billion, from the $2.7 billion that was forecast when the budget was handed down earlier this year.

The forward estimates are substantially worse than those released at budget time.

Deficits are expected to continue in the next two years before the budget returns to surplus in 2018-19, one year later than previously expected.

Premier Colin Barnett said the “poor result” was due to the impact on falling commodity prices, the state’s lower share of GST grants and weak tax revenue due to the sluggish economy.

He stepped up pressure on Canberra to agree a solution to the GST distribution, which he described as “absolutely outrageous”.

“This is no longer an argument between the states,” Mr Barnett said.

“This is effectively a Commonwealth tax on Western Australia to redistribute GST from this state to the other states.”

Mr Barnett signalled that he would only support an increase in the GST rate if the distribution of that revenue was improved.

Western Australia’s GST share hit 30 cents in the dollar in 2015-16, $4.4 billion less than if it was distributed on a per capita basis.

Looked at another way, Western Australia expects to receive just $1.9 billion, or 3.3 per cent, of the $57.1 billion GST ‘pot’ this year.

Treasurer Mike Nahan said today the government would use asset sales to ensure state debt did not get that high.

“It won’t get there because we will have an asset sale program that we will achieve by that time,” he told a media briefing today.

“None of the asset sales are built into that.”

The government has already announced planned asset sales worth an estimated $5 billion, including the Perth Market Authority, Fremantle Ports and Utah Point, and Dr Nahan signalled more was needed.

“We have to step up our asset sales,” he said.

“We will have to look at others.”

Judging by the experience of other states, the big energy utilities would have to be sold if the government wanted to make a sizeable dent in its debt load.

However, premier Colin Barnett said he would not support the sale of Western Power, because of WA’s isolated energy network and the utility’s natural monopoly status.

“If the government was to retain any single asset in the energy industry, it would be that,” Mr Barnett told today’s media briefing.

That leaves Synergy, which its chairman Lyndon Rowe believes should be split into competing ‘gentailers’ before being sold.

The government has responded to the budget deterioration by announcing $1.3 billion of savings, including an immediate six-month recruitment freeze across the general public service.

The freeze will apply to all general public service positions with the exception of teachers and police.

The treasurer said the Mid-year Review made it even more important that public sector wages be contained, calling on public sector unions to play their part.

“We have the best paid public service in the country but it’s time to take a breather,” Dr Nahan said.

“In the current climate, unions must show restraint and accept that a pay rise reflecting CPI is an extremely good result for their members,” Dr Nahan said.

“After inheriting the best set of books in the state’s history, the Barnett government has completely sent a wrecking ball through the state’s finances,” Mr Wyatt said.

“Despite what Mr Barnett and Mr Nahan have said, the story of this Mid-Year Review is not of GST and commodity prices but a failure of Liberal financial management.”

Speaking to journalists, Dr Nahan insisted the government could not have foreseen the extent to which revenue has fallen.

“Did we see a precipitous drop in iron ore prices? No.”

Chamber of Commerce and Industry of WA chief executive Deidre Willmott said the government must get the budget back into surplus but not by increasing taxes on business.

“There are three areas where the government should focus its attention: reducing its spending, reforming the public sector and executing an asset sales agenda,” she said.

“In the public sector, salaries have more than doubled to more than $11 billion and are projected to hit $14 billion in 2018-19.

“The government should increase the assets it has for sale because privatisation leads to more efficient service delivery.”