Development at Springs Rivervale is moving into overdrive, despite widespread debate over whether the area already has too many apartments. 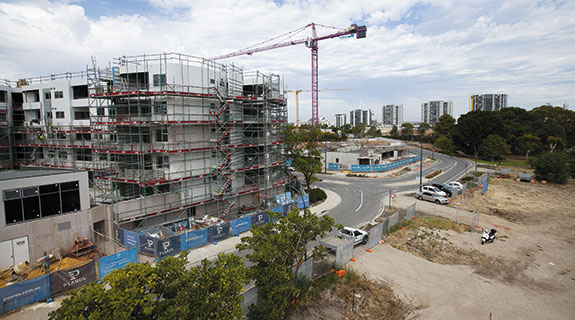 Development at Springs Rivervale is moving into overdrive, despite widespread debate over whether the area already has too many apartments.

Just months after the first apartment project at Springs Rivervale was completed, developers are launching the next round of projects in the high-density development hotspot.

The first building to the finish line was Finbar Group’s $100 million Spring View Towers, which reached practical completion in October. Wasting no time, the developer has already moved onto its next Springs Rivervale job, the $76 million, 154-apartment Arbor North, which began construction late last year.

Edge also launched pre-sales for its riverfront Vantage apartments in November last year, the company's third development in the area.

And despite widespread assumptions that the works under way had the Rivervale area well catered for in terms of apartments, the next round of projects at the LandCorp-led redevelopment area are already emerging.

BGC Development recently started work on site at its Tribeca South project, part of a three-stage development with a collective value of $97 million, which will provide 180 apartments.

The sales campaign is well under way for Tribeca East, which is being marketed by Blackburne Property Group on behalf of BGC, while the third stage, Tribeca North, will launch later this year.

But BGC Development general manager Ross Catalano said the company was about to start work on another project that would have a more significant impact on the area – the 224-room Aloft Hotel, which is part of the Starwood Hotels network.

Mr Catalano said work was expected to begin on the hotel, which will be the first Aloft in Australia, in late April or early May.

“Aloft is a hotel concept that is very different for Australia and it’s a coup to be bringing it to Perth,” Mr Catalano told Business News.

“The brand focus is on tech savvy, design oriented travellers and there will be bright, stylish interiors and public areas that appeal to hotel guests as well as local residents.

“We expect that with nearly 1,000 apartments at The Springs and many buyers under the age of 40, Aloft will become their ‘local’ and a favourite place to meet and socialise.

“Through Aloft, we will deliver the lifestyle amenity and facilities that people now expect to see in urban neighbourhoodsfrom the outset.”

Work is also expected to start in late March or early April on the largest value development in the area – Limnios Property Group’s $160 million Park on Swan.

Limnios Property Group managing director Irene Limnios said the Park on Swan project was a unique proposition in that it included entry-level apartments and luxury penthouses and ‘skyhomes’.

Perth-based construction company DORIC was appointed to carry out the works last year.

Ms Limnios said sales were progressing well on the project, with most of the penthouses already sold and the luxury skyhomes just being released to market.

Any talk of oversupply in Rivervale, she said, was short sighted, considering the expected transformative effect of the nearby new Perth Stadium and Crown’s new luxury hotel, Crown Towers, which is rapidly progressing.

“I look at Rivervale like East Perth was many years ago,” Ms Limnios said.

“Back then, we had to try and really sell the location of East Perth, now East Peth sells itself and the people who bought back then saw some real growth because they were smart enough to get in first.”

Mr Catalano said developers were already looking for other corridors in Rivervale like the Springs once the stadium project, and all its associated amenity, was completed.

Meanwhile, another significant project for the area received planning approval last week – a 147-apartment development with a base construction cost of $40 million, put forward by a joint venture between Hillam Architects and a China-based developer.

While Hillam Architects principal David Hillam did not disclose the identity of the developer, he did say marketing would begin in the next two to three months, and if sales went well, construction would start at the end of this year or early next year.

He also shrugged off widespread negativity surrounding a slowdown in sales for apartment projects.

“The reality is, the sales numbers are the same, there just happens to be twice as many projects,” Mr Hillam said.

“In our view, it’s probably gone back to more of a standard market, whereas 12 or 18 months ago you didn’t have to do anything good to sell out quite quickly.

“People that are buying, they might have committed to something in one week previously, it’s now a three to four week process for them.”