Mirvac Group’s long-awaited next stage of apartments on the Burswood Peninsula could be facing further delays, with the developer seeking to extend the date by which it must commence the already approved project until January 2019. 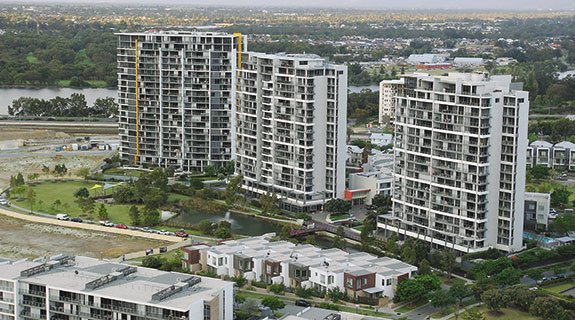 EMPTY SPACE: The vacant site next to Mirvac’s other buildings at Burswood is expected to remain undeveloped in the near term.

Mirvac Group’s long-awaited next stage of apartments on the Burswood Peninsula could be facing further delays, with the developer seeking to extend the date by which it must commence the already approved project until January 2019.

Mirvac applied to the Metropolitan Central joint development assessment panel in September for an extension to its planning approval for the site, which was granted in January last year.

According to DAP documents, Mirvac’s reasons for the delays in developing ‘Tower 6’ and request for an extension relate to uncertainty regarding the recently approved Burswood Peninsula District Structure Plan, expansion of Crown Perth, and continued soft conditions in the local apartment market, particularly for luxury projects.

Mirvac has been planning a 23-storey apartment tower alongside its existing developments on Burswood Road for more than two years.

The developer had originally planned a 93-apartment luxury complex with 20 four-bedroom penthouses, but it was forced to reassess that plan when faced with objections from local residents and the Town of Victoria Park.

At the time, Mirvac said it had changed its plans due to changed market conditions.

DAP documents released this week indicated no fresh plans had been submitted with the application to extend.

The proposal for which Mirvac is seeking to extend approval contains 176 apartments and has a base construction cost of $70 million.

However, council officers at the Town of Victoria Park consider an extension of three years is excessive, and have recommended the DAP only approve an additional 18 months.

“This would still allow the applicant to apply for a further extension of time in 18 months’ time, and for the JDAP and council officers to reassess the proposed development at that time in the context of other structure planning work that would have been undertaken,” the DAP agenda said.

The DAP will meet early this week to consider granting the extension.

Multiple sources have told Business News that Mirvac was also facing headwinds at Claremont, where it launched marketing for a 142-apartment development in February.

Construction past forward works has not yet begun on that project, known as The Grandstand, while Mirvac also holds another development site at Claremont where marketing has not yet commenced.

The delays are not the only issues Mirvac has had with luxury apartment developments in Perth.

Its Beachside Leighton development was a major contributing factor to the developer’s $273 million loss in 2013, after it was written down in value by $43 million.

Buyers at Beachside Leighton were also not satisfied with the development in 2011, with multiple purchasers attempting to back out of their contracts.

One of the main claims raised in court was that the apartments’ interior finishings were not up to a standard commensurate with the multi-million dollar prices paid for them.

The Supreme Court upheld the terms of sale in the contract midway through 2011.

Those issues have not stopped Mirvac at Leighton Beach, with the developer winning approval midway through last year for four five-storey apartment buildings, comprising 208 dwellings.

Marketing of those apartments, known as Latitude at Leighton, is ongoing.

The Hyatt Place hotel will total 110 rooms over five storeys, and will be built by CIMC Modular Building Systems.