Moore the miners’ friend, no less 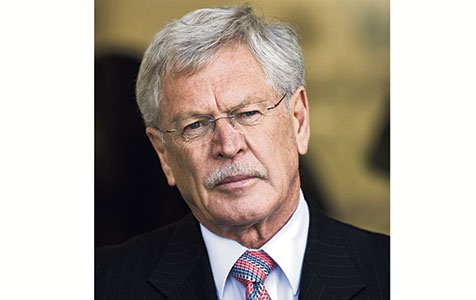 THE resources sector has lost an experienced advocate, and the state government a steady hand, with the retirement of the former mines and petroleum minister Norman Moore after a 36-year career in the Legislative Council.

Mr Moore was a crusty conservative in the tradition of Liberal leaders in the upper house, but he was also a shrewd administrator who was able to navigate through most controversies, and achieve a satisfactory result.

His affinity with the resources sector was inherited from his father, who worked with Gold Mines of Kalgoorlie on the Golden Mile, and later with the Great Western Consolidated operation at Bullfinch, until the mine closed in 1963.

"I guess one of the reasons why I have had a long interest in the mining industry is that I not only lived in these mining towns but also actually experienced the fact that they closed and that communities just had to shift," Mr Moore said in his final speech.

"That is a sad part of the mining industry, but a reality of it."

After the 2008 election, he oversaw the removal of the mines and petroleum sections from the then department of industry and resources and created the Department of Mines and Petroleum.

The exploration incentive scheme, promoted by the National Party, was also introduced.

"A lot of our state has never had a drill hole in it. It is an unexplored part of the world which, in fact, could have significant ore bodies."

Mr Moore was also a strong promoter of workplace safety.

Six miners were killed in his first year as the minister in 2008.

But near enough was never good enough with regards to safety, and industrial accidents were not glossed over as 'a fact of life'.

"The most significant achievement in the mining industry in my term as minister and probably ever was the realisation that 2012 was the first year in our state's recorded history that there were no fatalities in the mines," he said.

I have known the newly retired MP since student days at the University of WA and Claremont Teachers' College.

Our paths also crossed in A-grade amateur football in which he played with Teacher's College and I was with University.

Once, when I phoned him in my role as a journalist, he said he wouldn't have answered if he'd known I was the caller.

Nevertheless, he kindly presented me with a set of upper house cufflinks upon his retirement.

IF you've seen the hundreds of foreign-made motor vehicles and items of machinery unloaded onto the wharf at Fremantle every other day, the Ford Motor Company's decision to phase out production at its Victorian operations is no surprise.

Remember the days back in the 1960s when Japanese cars were considered cheap and nasty? Those days are long gone.

But I also remember travelling in South-East Asia in the late 1980s and one of my hosts remarking that the Holden – and I saw many on those foreign roads – was a "good car".

Ford's decision was driven by economics.

The federal and Victorian governments had been propping the company up over a number of years with 'one-off grants.

But you can only do that for so long.

It's years since Ford and General Motors Holden abandoned their modest assembly operations at North Fremantle and Mosman Park respectively.

And processing has done it tough here as well.

Successive Western Australian governments dreaded calls from fruit processing operations in Manjimup and the cannery in Albany for extra assistance to achieve the reforms to ensure financial independence; they soaked up millions of taxpayers' dollars.

In 1980, in Sydney, I reported on GM Holden's decision to close its Pagewood assembly plant, which had employed thousands of workers.

The reasons for the decision included inadequate economies of scale and lack of investment in new equipment – the writing was on the wall for the industry.

Protection lends itself to inefficiencies and feather bedding.

It is counterproductive in the drive to minimise production costs.

It's the job of the manufacturers to produce vehicles the domestic and foreign markets want to buy, at a competitive price.

If they can't do that, even with some government handouts, the market makes the decision about their longevity.

Governments can provide some assistance and encouragement, but you can only be a soft touch for so long, even in an election year.