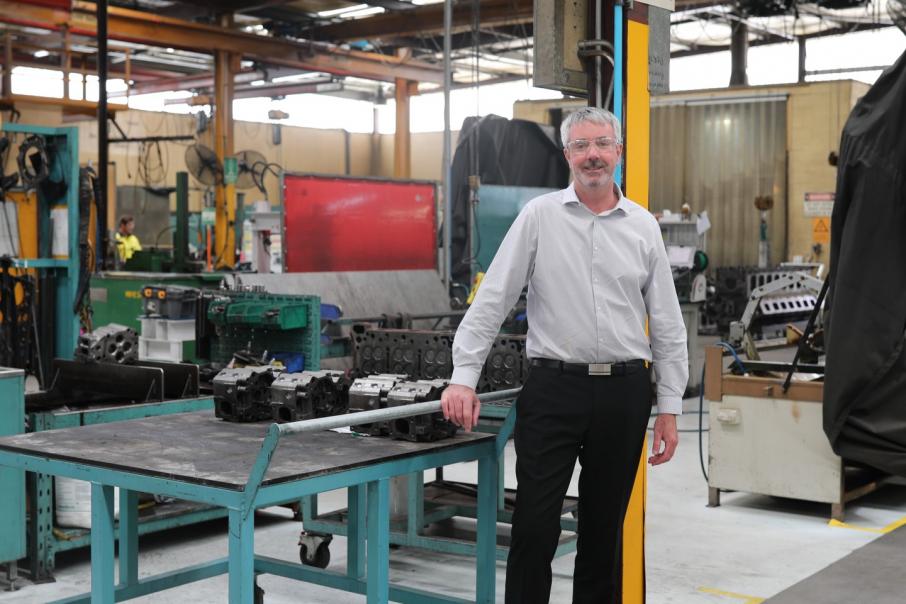 Stuart Davis says if the company is going to be around for decades to come, it has to be competitive on the world stage. Photo: Madeleine Stephens

Not in his wildest imaginings would Robert Moore have dreamed that ‘robots’ would one day be used at the business he founded in 1920.

A truck driver at the time, Mr Moore established R Moore & Sons after he started making parts for his own truck and was asked to create parts for others.

The business grew out of Mr Moore’s home on Shore Street in North Perth, and has since been passed down through three generations of the Moore family.

It has undergone a number of transformations over the past century, from round-the-clock production of parts for the WWII effort, to the consolidation of its state branches.

Now, 100 years after the business started, it is installing a ‘robot’ to take care of some of the more menial production tasks.

The company is keen to invest in technology, and has recently acquired computer numerical control machines, automating processes and giving its employees a chance to improve their technology skills.

Starting with the company in 1991 and appointed managing director in 2005, Mr Davis said the leadership team had always looked overseas for new trends and improvements.

“We know that if we are going to be around for decades to come, we’ve got to be competitive on the world stage,” he said.

According to Toyota, the system is based on two concepts: jidoka, which means that when a problem occurs the equipment shuts down immediately, which stops the manufacture of defective products; and the ‘just-in-time’ concept, whereby each process only produces what is needed for the next process for continuous flow.

“It allowed us to put smarter machines in place and to get rid of old machines and redo the layout so it’s a more spaced-out shop floor,” Mr Davis said.

“And yet we have another 20 to 30 employees and more machinery, but we actually have more room to work within because we remove the waste.”

After implementing the system, the company had increased staff numbers from around 40 to 68, he said.

During the past 100 years, R Moore & Sons has grown and contracted and made changes to its services.

In WWII, the business worked 24-7 servicing machinery for the Australian and US defence forces.

“There was an armed guard outside the facility to guard all the facility to make sure that it continued operation because it was such a vital link in that period,” Mr Davis said After the war, the company expanded to have branches in other Australian cities.

But in the 1980s, management employed an external consultant to assist with the running of the business, ultimately deciding to close the branches in other states and build a new facility in Kewdale.

It was at this time when the third generation, Neil Moore and Warren Moore, who still have a majority shareholding in the business, bought out the rest of the family.

The company had a change of service offering about 10 years ago, when management decided it would stop building complete engines and focus on machining.

“We wanted to concentrate on the core of our business, so there’s a lot of capital tied up in our machinery, equipment and tooling, and we wanted to utilise that investment in that capital to get the maximum return,” Mr Davis said.

“There wouldn’t be too many mine sites, particularly in Western Australia, that don’t have our fingerprints on engine components,” Mr Davis said.

Mr Davis said defence-related work was an option for R Moore & Sons if the federal government decided to relocate full-cycle docking of the Navy’s Collins class submarines from South Australia to Henderson, south of Perth. (A decision is expected soon.) However, even in the event the work was to shift to WA, mining would likely continue to be the company’s main source of work, he said.

Neil Moore remains chair of the company and his brother Warren serves on the board.

Mr Davis said the pair was involved in the business, and arranged Zoom calls around once a week to check in.

However, as the fourth generation has pursued other careers outside the family business, it is uncertain whether the dynasty will continue.

Mr Davis said part of the succession plan had been undertaken around 10 years ago, with Neil and Warren selling some of their share in the company to the management group.