THE decision by Planning Minister John Day to approve a major residential development south of Moore River has sparked outcry among opponents and applause from property developers. 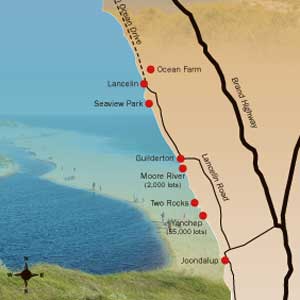 THE decision by Planning Minister John Day to approve a major residential development south of Moore River has sparked outcry among opponents and applause from property developers.

Original development plans, which allowed for a population increase of 15,000, were blocked after the area was rezoned to rural by the Labor government in 2005.

Mr Day said the size of the proposal has been scaled back by 60 per cent after consultation with community groups opposed to the development.

"It provides some certainty to the industry that once a particular zoning has been approved by government we won't have a situation where, because of policy changes or active groups, it can be reversed," he said.

Marcus Plunkett, managing director of the Moore River Company, which will develop the land, said the decision restored faith in the integrity of WA's planning system while ensuring residential and tourism growth and providing infrastructure.

"A lot of those residents believe it will bring amenities to the area that they are crying out for, such as a possible primary school, a possible kindergarten and some better retail facilities, because let's face it, Moore River has been stagnant and has had one general store there for the last couple of decades," he said.

But Guilderton Community Association president Geoff Gilby said developing the area was inappropriate and he was disappointed with the decision.

"It's going back on a previous government's decision. I think it's an attempt at a compromise and it's not going to satisfy anybody," he said.

"We feel very sensitive about that estuary, it's under all kinds of pressure; there's heavy boating pressure on it now and it's just too small a thing to take much more load."

Mr Gilby said the GCA would prefer the area to be listed as a regional park or heritage area to encourage tourist activity.

"If you go up the Moore River, it's what the Swan River used to look like 180 years ago," he said.

"It's one of the very few on the Swan coastal plain that you can go up that isn't cleared right down to the edge and doesn't have houses right up either side of it.

"That needs to be preserved and protected for all Australians and Western Australians, not just those lucky enough to own houses or blocks along the edge of it."

Mr Lenzo said the north-west corridor was a vital area of growth as the Indian Ocean Drive was completed from Cervantes to Jurien Bay.

The road is slated for completion by 2011.

"It will be a gradual growth in some selected areas."

Plans for a new regional city north of Perth are also a step closer to reality after the Wanneroo City Council approved the Two Rocks-Yanchep District Structure Plan last week.

Combined with a proposed Alkimos-Eglinton city proposal, the Yanchep-Two Rocks region could accommodate up to 450,000 people within 50 years.

Other developments transforming the region include the 2,000-hectare Turquoise Coast development at Jurien Bay, and residential developments Seaview Park and Ocean Farm estates, near Lancelin.