The state government remains the majority shareholder and the Grains Research and Development Corporation also maintains an interest.

Monsanto and InterGrain will exchange certain wheat germplasm for breeding, with InterGrain gaining access to breeding technology tools and services for genotyping and marker development.

This is expected to deliver increased genetic gain which will ultimately provide wheat farmers with the ability to achieve higher yields.

"This is a very exciting development for Australian wheat farmers, with the partnering of Australia's leading wheat breeder and germplasm developer and the world's no. 1 technology provider," InterGrain chairman Dale Baker said.

Agriculture and Food Minister Terry Redman said the State's grain growers would reap the benefits of the new partnership.

"Monsanto's minority shareholding in InterGrain will enable access to more advanced breeding technologies and germplasm of improved varieties to benefit our growers," he said.

"In the short term there will be significant benefits to the conventional (non-GM) cereal breeding program which will utilise rapid and high volume robotic technologies and breeding systems to identify traits for high yield, drought tolerance and nutrient use efficiency.

"These breeding technology services will significantly improve our wheat varieties and ultimately deliver higher yields and value to WA growers."

"This new alliance will ensure InterGrain stays at the forefront of cereal breeding in Australia."

Under the InterGrain collaboration with Monsanto, Western Australian grain growers are expected to be among the first to have access to Monsanto's technologies.

Monsanto and InterGrain will exchange certain wheat germplasm for breeding, with InterGrain gaining access to breeding technology tools and services for genotyping and marker development. This is expected to deliver increased genetic gain which will ultimately provide Australian wheat farmers with the ability to achieve higher yields.

"This is a very exciting development for Australian wheat farmers, with the partnering of Australia's leading wheat breeder and germplasm developer and the world's no. 1 technology provider," InterGrain Chairman Dale Baker said. "InterGrain has been actively seeking a partner to grow our wheat breeding program for some time, and is very pleased to reach this agreement with Monsanto, the world's leader in this regard. It will open the doors to a vast new library of germplasm and powerful technology capacity which Australian wheat growers have not previously had access to, which we expect will translate to more rapid improvements in wheat yields and performance."

Baker said the collaboration would potentially allow advances in areas such as yield performance, disease resistance and drought tolerance, as well as improved end use qualities.

InterGrain is a leading Australian crop breeding company with highly successful wheat and barley breeding programs which target the major cereal growing areas of Australia. InterGrain Pty Ltd was established in 2007 by the State Government of Western Australia and the GRDC.

"This collaboration, and the associated funding and access to advanced breeding tools it brings, will support the acceleration of genetic gain for wheat, which is a promising development for wheat growers around the world - especially those in Australia," said Robb Fraley, Monsanto's Chief Technology

Officer. "InterGrain has an excellent team of breeders, and with the breeding and technology expertise Monsanto brings to this collaboration, together we expect to deliver significant benefits to Australian wheat growers."

Australia is a major wheat-producing country and exporter. Wheat is its most important crop domestically, and significant public and private research and development is occurring in wheat breeding and biotechnology.

"Monsanto has a strong history of investment in technology collaborations, and as we look for opportunities to enhance our wheat business, this is a natural fit for us," Fraley said. "We are committed to developing advances in breeding and biotechnology to deliver improved wheat yield and productivity and are pleased to be partnering with a market leader which has demonstrated both its expertise and commitment to enhancing the productivity of the Australian grains industry."

Longer term, the collaboration also will provide InterGrain with access to biotechnology traits currently being developed for wheat, which Monsanto would expect to introduce in the next decade, pending appropriate regulatory approvals. Monsanto is working on developing important traits for wheat farmers around the globe including drought tolerance and yield improvement.

Monsanto's recent work in wheat began in 2009 with the acquisition of the WestBred U.S. wheat-breeding business and the company's near-term focus is on launching better varieties of wheat through its conventional and marker-assisted breeding investments.

Through its technologies, Monsanto sees an opportunity to bolster the sustainability of wheat cultivation by helping wheat farmers improve yields while reducing the use of input resources, such as water, land and energy. Monsanto earlier this year announced the expansion of its yield and stress collaboration with BASF to include wheat. 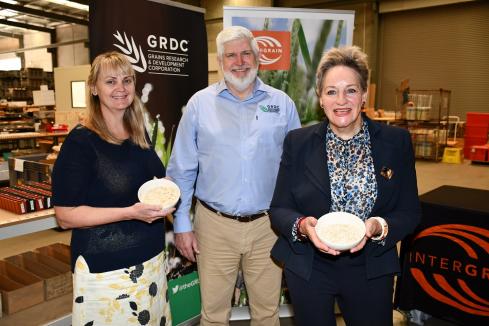