Developers are pushing ahead with apartment projects, despite uncertainty clouding construction costs. 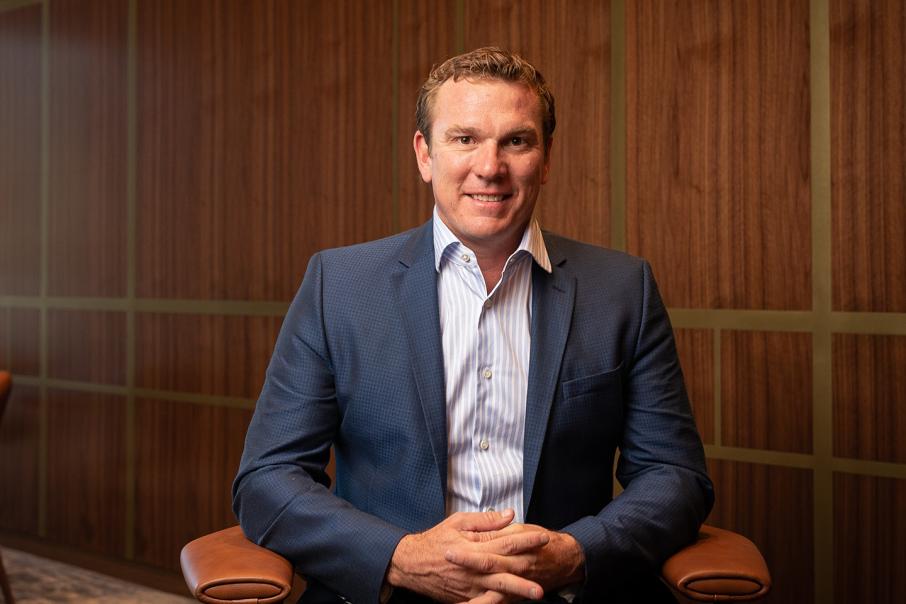 But David Cresp, the director of property economics and market research at Urbis, said that wasn’t always the case, and particularly not in 2021.

“While it’s easy to look from the outside and say it’s a great market for developers, it’s one of the most challenging because of the pressures on cost,” Mr Cresp told Business News.

“It’s a real race at the moment to try and get enough pre-sales to get a building contract locked in before the price increases and, at some stage, increases to a level that makes the development unviable.”

Apartment developers have not been immune to the materials and labour shortages emerging across the construction sector, as the economy continues to navigate the pandemic.

Mr Cresp said apartment prices had increased during the year to June 30, but not as much as those in the established housing market, which had placed further pressure on apartment developers.

House prices were up 10 per cent for the year, while Perth apartment prices achieved 8 per cent annual growth, according to the latest data from CoreLogic.

“It [prices] will need to increase because of construction cost increases,” Mr Cresp said.

“There is demand there but it’s still highly competitive [for sales] and the market is being driven by owner-occupiers who are very selective of what they want, where they want it, and what finishes they want.

“It’s the right product in the right location, but they can also only push up prices so much … [in comparison to] stock already completed that hasn’t had prices increase in the face of rising construction costs.”

He said interstate and international border closures had been another challenge for the market during the past year.

While apartment sales had been steady, the impending challenge would be catering to an anticipated population boost once those borders opened, Mr Cresp said, particularly given current availability and construction levels.

“The number of apartments under construction is up from 12 months ago but low compared to previous years,” he said.

“Preliminary data from Essentials shows there were 2,615 apartments under construction at the end of June 2021.

“The number of available [yet to be sold] apartments in projects under construction is also falling.”

As supply tightened, Mr Cresp said developers had put more of a focus on the pre-sales market, pointing to several recent product launches.

Only time would tell how developers would deliver those off-the-plan apartments while facing steep construction costs, he said.

“In the next 12 months, I think costs will continue to increase about 10 per cent with pressure on material and labour,” Mr Cresp said.

Finbar managing director Darren Pateman said bulk purchasing materials ahead of its requirements was one way the company had sought to mitigate price fluctuations.

Despite widespread uncertainty over construction costs, Finbar is still pushing ahead with its projects, with $726 million worth of apartments planned to be under construction during this financial year.

“That is a big commitment of capital in the current market,” Mr Pateman told Business News.

“Finbar is committing the capital and has aligned with strong joint-venture partners willing to commit to commence construction on projects despite modest pre-sales and bring on completed stock to the market.

“An approval, a brochure, a sign board, and a selling agent do not make you a developer in this market.

“It is a competitive advantage for us that we have the cash, debt-free completed stock, and balance sheet strength, and the confidence of buyers and a strong reputation, to be able to commit capital and start these projects where other development companies may not.”

The ASX-listed company said it planned to break ground on Aurora in Applecross and The Point in Rivervale in FY22, with that $726 million commitment also including the ongoing construction of its $400 million 39-storey and 22-storey Civic Heart towers in South Perth: the largest apartment project under construction in Perth by number of units.

The 309-apartment development was formally launched to market late last year and Finbar said it had secured more than $75 million worth of sales by the time it had started earthworks in January.

The foreign buyer surcharge tax continued to be a major impediment to industry, Mr Pateman said, advocating for its removal.

“Despite the low interest rate environment and improving rental yields, investors are returning to the market very slowly,” he said.

“Investors will return if they can see a period of sustained growth in apartment prices.”

While Urbis is still compiling Q2 2021 results, preliminary data shows there were at least 433 sales for the quarter, on par with similar numbers achieved in Q4 2020, which recorded the highest volume of sales for a quarter since 2016. 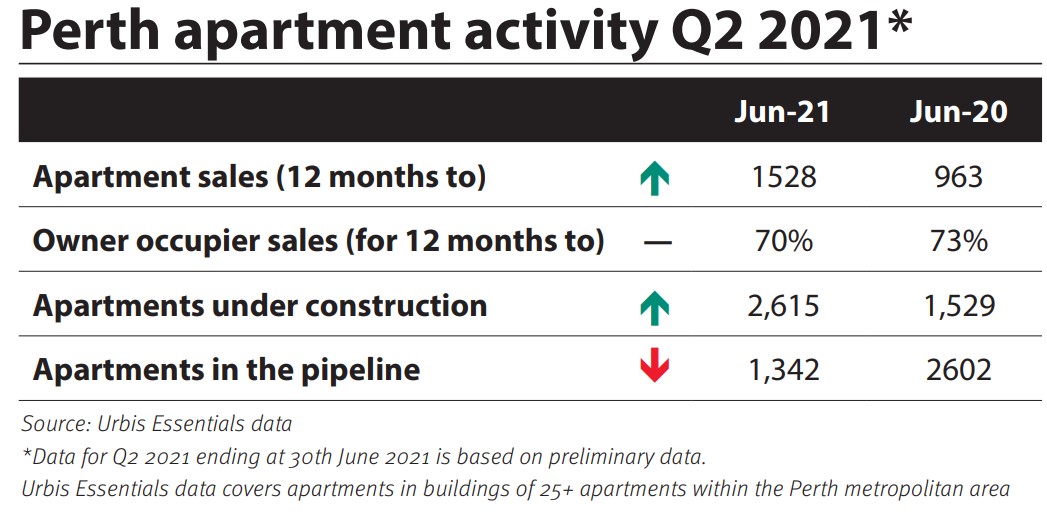 “This took apartments sales for the 12 months to June 2021 to being the best results recorded in the Urbis Essentials survey since 2016, which saw 2,144 sales,” Mr Cresp said.

Sales momentum had likely been boosted by the government’s stamp duty rebate for off-the-plan apartment sales.

The 75 per cent rebate was introduced last year as a COVID-19 stimulus measure, with industry groups now lobbying for its extension beyond October to further incentivise prospective buyers and continue to support a healthy pipeline of projects.

“This compares to the Brisbane market, where generally less than 50 per cent of buyers are owner-occupiers.

South Perth and Applecross were among the top performing suburbs for apartment sales in Q2, making up 40 per cent of total sales across Perth.

That was underpinned by Edge Visionary Living’s launch of Lumiere, and Finbar’s Civic Heart project, both in South Perth.

Mr Cresp said while growth in rents had started to entice investors back into the market, they continued to be at lower levels, accounting for 21 per cent of buyers in 2021 compared to 28 to 30 per cent in 2016 to 2017.

East coast buyers also accounted for a low proportion of sales in Perth.

Mr Cresp said that demographic had grown slightly in 2021, but still accounted for just 4 per cent of buyers.

Now that completed stock had started to dry up, Mr Billings said he had seen some movement in prices, despite buyers still seeking discounts while comparing prices to sales last year.

But developers were starting to increase prices of unsold off-the-plan stock and were selling at those prices, he said.

Additionally, Mr Billings said, the end of the rental moratorium had encouraged a lot of tenants to seek a permanent place to live.

“With the house price surging out of reach and investors coming back into the market after the COVID moratorium has lifted, the last three to four months have been busy for apartments,” he said.

Although Urbis found there were fewer apartments under construction and being brought to market than this time last year (see table), Mr Cresp said that had largely been the result of previously deferred projects breaking ground in 2020.

There are 15 apartment projects that could launch over the next 12 months, representing more than 1,340 apartments, according to Urbis.

That could include two projects by Blackburne.

The Perth-based developer already has $1.15 billion worth of Perth apartment projects under development, most of which managing director and founder Paul Blackburne said were under construction and already sold.

Those active projects include One Subiaco (248 apartments), The Grove (242 apartments) located in Claremont, and the 93-apartment East Village development, neighbouring the Karrinyup Shopping Centre redevelopment.

“In the next 12 months we have two exciting new projects to launch, and one will be the largest project ever undertaken in Western Australia,” Mr Blackburne told Business News.

“Both are in prime western suburbs locations and will bring some really innovative new concepts to apartment living in WA.

“We have also just secured a new site … we will lodge a development application next year and launch for sale in 2023.”

Blackburne is the state’s largest apartment developer according to Business News’s Data & Insights, as ranked by total value of WA projects under construction.

He said his strategy remained much the same for the year ahead and in the long term: acquiring up to two prime sites to feed his pipeline and maintain about $1 billion worth of apartments under development at one time.

“We have had $712 million of off-the-plan sales in the past 22 months, and we expect this volume of sales to continue,” Mr Blackburne said.

“Blackburne is fortunate as we provide our own equity, so don’t need to rely on third parties.

“This also means our cost of funds are less so we can provide higher-quality offerings at a lower price.

“We have resisted increasing prices too much as we prefer to continue with our long-term value proposition.”

“One of the benefits of being one of Perth’s major apartment providers is we have significant scale in the business that enables us to access a lower cost structure,” Mr Hawkins told Business News.

“In terms of the current strong demand, buyers are savvy enough to realise buying off the plan now means they can set the price today and benefit from future price increases.”

Mr Hawkins said 70 per cent of the 98 apartments in Edge’s Lumiere project in South Perth had been sold, representing revenues of about $200 million.

Downsizers, retirees, empty nesters, and older singles remained a key target market for Edge, and Mr Hawkins said this had been driven by improvements in the quality of apartments and a greater acceptance of apartment living.

A design-led approach had been paramount to Edge’s success in sales, he said.

“They must have compelling reasons to choose the apartment living experience that we offer, with all the security, world-class amenities, larger-than-standard floorplan options, and great community feel, over the traditional house on a large block,” Mr Hawkins said.

In addition to completing construction on its 17-storey Arthouse Apartments in Joondalup, and the first stage of Eden Floreat, Mr Hawkins said Edge was busy bringing more projects to market.

Edge has also partnered with DevelopmentWA for a 250-apartment infill project on Burt Street in East Fremantle.

Another sizeable project on Edge’s agenda is The Dunes in Scarborough, a 258-apartment project now being assessed for planning approval.

The project is one of several large-scale developments on the horizon for Scarborough, including Sentinel Real Estate’s recently approved build-to-rent offering, comprising 175 dwellings.

The project was shelved in 2019 after the developer said it was no longer financially viable, with new plans proposing three towers containing 370 apartments surfacing in July.

Design trends had followed suit, he said, away from cookie-cutter apartments.

“The demand for customisation is increasing because the Perth market is becoming more sophisticated and discerning, given the increasing competition,” Mr Boekhoorn told Business News.

“The desire for amenities and convenience is increasing and people’s understanding of sustainable aspects like ventilation, the northern sun, and access to green space is also rising.”

Ageing in place was another emerging trend, he said, with architects continuing to look at how apartments could be adapted for the current and future needs of an ageing population.