Perth-based homebuilder Summit Homes is seeking to head off a looming shortage of bricklayers by ramping up its capacity to deliver homes using steel-framed and modular building techniques. 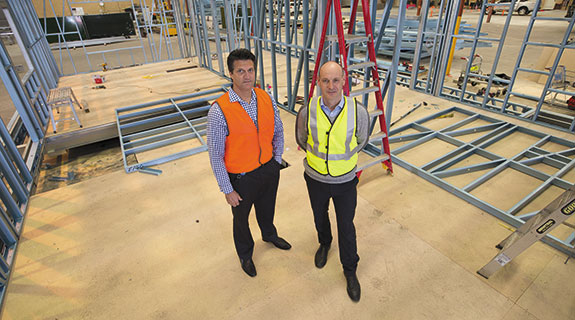 Perth-based homebuilder Summit Homes is seeking to head off a looming shortage of bricklayers by ramping up its capacity to deliver homes using steel-framed and modular building techniques.

Bricklayers have been in tight supply across Western Australia’s building industry for a number of years, with the cost of the trade rising to around $2 per brick at the height of the recent peak in building activity last year.

According to the Australian Brick and Blocklaying Training Foundation, the average age of a bricklayer in Australia is 45, with the number of brickies retiring not being matched by the number being trained.

Against that backdrop, Summit Homes has established a research and development facility in Myaree to explore the use of steel-framed construction and modular building techniques.

Summit Homes managing director David Simpson said establishing the facility was about exploring more efficient and innovative ways of building, while setting new standards for quality in the controlled environment of a factory.

“We’re always thinking about innovation, whether it is because of increased energy costs or through a changing demographic of trades entering the workforce, or looking for more efficient processes in construction,” Mr Simpson told Business News.

“Unless you’re innovating and growing and realising there are more efficient ways of building, ultimately you would be left behind.”

Mr Harvie said the builder had three key offerings outside of double-brick construction: complete new homes, which it built and sold at its own land estates; double-storey new homes, where the first floor is double brick and the second storey is a modular steel-framed build; and home improvements, where steel-framed extensions are added to existing dwellings.

“With lightweight framing, you’re able to be a bit more innovative about the design, particularly with opening up the sides of the home and not needing as many structural walls,” Mr Harvie said.

“You can do more innovative things at less cost.”

Summit Homes is not the only big WA-based builder to explore using alternate techniques to the dominant double-brick method.

BGC Residential has partnered with the Department of Housing to offer two modular home estates – one at Alkimos Beach at Peet’s Shorehaven Estate and the other in Banksia Grove.

However, BGC has put its modular facility in mothballs for the time being and will continue to focus on rolling out traditional builds.

Mr Simpson said Summit Homes was also working with the Department of Housing, which was interested in modular housing primarily because of the speed at which a house can be built, reducing the pressure on low-income earners seeking to exit the rental market.

“Department of Housing likes the idea of speed and innovation and all of those things, but we’re also working with them closely to develop some more odd-shaped reactive sort of sites that don’t lend themselves to traditional double-brick construction,” Mr Simpson said.

“Modular building lends itself to sites with challenges.”

Pindan is another prominent builder challenging the norm by using steel-framed modular techniques; it has a growing list of projects in its pipeline, including eight two-storey apartments that will be shipped to Onslow, as well as nine houses in Baldivis that were all fabricated at Pindan Modular’s Maddington factory.

But Mr Harvie said the big challenge for builders remained the same as it had been for years – shaking the commonly held view that modular construction is akin to cheap, transportable housing.

“We’re not going to be substantially less expensive, but we would say the benefits are acoustic values, thermal values, speed and quality.”