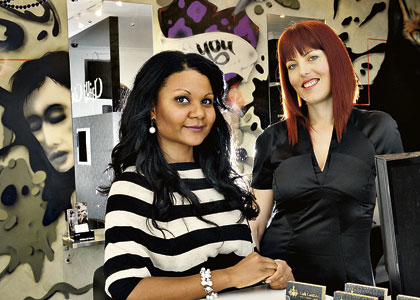 HAIR stylists Rachel Walker and Emmanuelle Torres have been cutting, colouring and styling hair for Perth clients for the better part of two decades.

In a business where an awareness of fashion and trends is vital, the pair have turned to technology, embarking on a drive to get their business recognised worldwide with their new ‘Style your Hair’ mobile application.

The owners of Perth salon Chilli Couture hope it won’t be long before people in India are taking heed of their hair styling tips thanks to the app.

The app features more than 60 do-it-yourself instructional videos showing people how to professionally style their hair at home.

After seven months of development and investment of around $50,000, the app has been officially launched for download on both Apple and Android operating systems this week.

It was initially intended to give existing Chilli Couture clients a bit of extra help, but Ms Walker told WA Business News they soon realised the potential market was much larger.

“Our target market is mainly women aged between 15 and 55 and we’ve identified that could be around 500 million people worldwide.”

Neither woman knew anything about developing an app before starting the project in February and Ms Torres said the learning curve was steep.

“Each week we would come up with something new that we didn’t know anything about; now when we’re speaking to other people who are curious about it, we can tell them we had no idea six months ago.”

Users can download the ‘lite’ version of the app, which gives nine videos free of charge, or the full version, which includes all 67 videos for $2.99.

Ms Walker said a lot of market research had gone into deciding how much to charge for the app, and included taking note of potential customers in countries such as India.

“We were very careful about not alienating those potential customers by making it too expensive, but then we didn’t want it to appear cheap either.”

A lot of thought has also gone into what advice to include in the app to ensure it didn’t cut profits from existing Chilli Couture custom.

“I’m not about teaching people how to cut or colour their hair at home;  that’s a completely different thing and what we’re trained to do for them,” Ms Walker said. “What this does is it teaches them how to style the style that they get at the hairdressing salon.”

The pair has avoided setting specific goals to determine the success or failure of the app, but are hoping downloads will at least pay off the monetary investment.

And they say if it doesn’t gain significant attention, the investment would not have been wasted.

“If it does take off, great, but if it doesn’t then we’ve got this amazing tool we can give our clients when they ask us how they can do it at home,” Ms Walker said.