A new mixed reality platform may not function to everyone’s taste, but there’s plenty of room for further development. 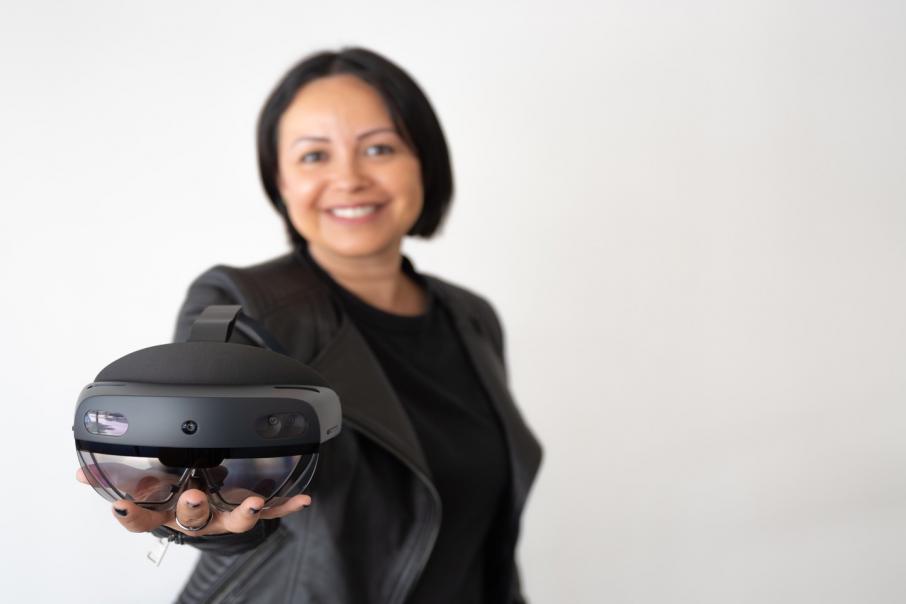 Microsoft CEO Satya Nadella describes it as the “interweaving of digital bits and physical atoms”.

Mesh enables developers to design experiences in virtual and semi-virtual worlds for people to interact with one another in real-time. It’s a shared holographic experience. In human-speak, it’s Zoom on steroids.

Expensive equipment, arduous setup processes and technical glitches mean that a number of people who have tested Microsoft Mesh are not completely convinced.

However, it has brought to light that we are only in the very early stages of remote collaborative environments.

If I could play a soundtrack to this article, ‘You ain’t seen nothing yet’ comes to mind.

Lucie Hammond is the CEO of Perth-based BeingVR, which creates virtual reality experiences for education and wellbeing.

With the HoloLens 2, viewers can interact with digital content that others in the same room cannot see. With Mesh, you can beam into a meeting as an avatar, into a real space or a virtual world (such as a jungle).

Eventually, Microsoft’s vision is for users to project in as a photo-realistic hologram-style version of themselves.

Imagine sketching in 3D to describe something to your colleagues; engineers physically moving a digital turbine and walking around it; or scientists teleporting into a submarine to see what’s happening underwater.

Many large organisations have a HoloLens 2 or similar device or are working with MR technology partners to prototype applications and explore potential cost savings, safety improvements and design/process improvements.

HoloLens 2 is an enterprise product pitched at commercial organisations; it’s reported that half of the Fortune 500 companies have bought one.

Edith Cowan University academic researcher Brad Nisbet has a focus on virtual technologies, and an interesting take on where all this is taking us.

“With companies like Microsoft, Facebook, Mozilla and Apple competing for control over our virtual world, to say nothing of the many startups, the virtual landscape is more reminiscent of the colonisation of the new world than the dot.com boom,” Mr Nisbet said.

Of course, all the big players have their own products in the pipeline.

Facebook already experimented with ‘holoportation’ with Occulus Spaces in 2017-2019, as well as smaller players such as Arthur or Spatial.

Microsoft argues the difference is that these are entirely immersed in VR headsets, whereas Mesh is more a blend of digital information and physical space.

She is also chair of Immerse Australia, a notfor-profit member association created to promote, support and represent the nation’s Extended Reality (XR) industry.

Ms Marinho said that, within the industry, MR technology was actually referred to as Extended Reality, but MR was being pushed by Microsoft (no doubt a branding play).

As an expert in the field, Ms Marinho believes spatial computing is the future.

“The days of a monitor, mouse and keyboard to interact with digital information are numbered,” Ms Marinho told Business News.

“Being able to see and interact with information around you by simply using your hands and voice – from a human computer interaction perspective – that’s the dream.

“ER is a spectrum of immersive technology that blends digital information with the physical world.

"At one end, Augmented Reality overlays digitally created content on top of a user’s real-world environment, viewed through a device such as a smartphone or head mounted display that incorporates real-time inputs to create an enhanced version of reality.

“VR is a fully immersive software-generated artificial digital environment: a simulation of three-dimensional images, usually experienced via a headmounted display.”

Right now, Mesh and the HoloLens 2 appear to be a luxury afforded by large enterprise customers with the budget to experiment.

Ms Marinho said everyday public adoption was dependent on a consumer product that was well priced, fashionable, and came with a good selection of useful and entertaining apps.

For corporates wanting to stay ahead of the game, it’s worth chatting with a local company to get a hands-on demonstration, discover the potential applications for your business, and understand the development process.