SPECIAL REPORT: The 2015 CEO salary survey has some surprising names near the top of the list while some of the state’s best chief executives are unexpectedly low down. 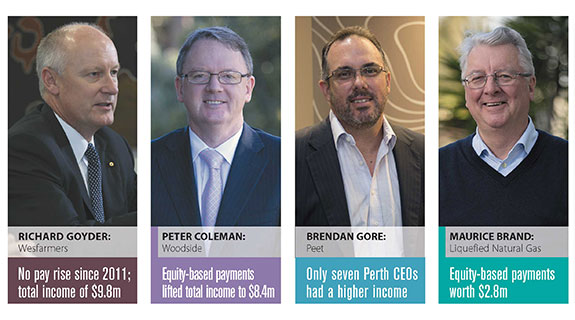 The 2015 CEO salary survey has some surprising names near the top of the list while some of the state’s best chief executives are unexpectedly low down.

Also in this week's edition: our special report on the salary packages of 40 CEOs appointed in WA this year.

Our full list available at https://www.businessnews.com.au/executive-salaries (note that online list does not include executives of non-WA companies)

There are two overarching themes that run through Business News’ 2015 salary survey, both of which speak to the response by individual businesses to the difficult economic environment.

On one hand pay restraint, and in some cases pay cuts, have affected many business executives, while on the other side of the ledger there are still many who continue to be well rewarded for their efforts.

The state’s top earner is a case in point.

Wesfarmers chief executive Richard Goyder has not had a pay rise since 2011.

But with a base salary of $3.3 million, an annual bonus (also unchanged) of $2.1 million, and a small lift in share-based payments and other benefits, his total remuneration kicked up last year to $9.8 million.

The Business News survey has identified nearly 70 Perth-based executives who earned in excess of $1 million in the past financial year.

If we added in Wesfarmers’ east coast executives, such as Bunnings boss John Gillam, there would be at least six more on the list.

The list of high earners is dominated by the big end of town; people such as Woodside Petroleum’s Peter Coleman, Fortescue Metals Group’s Nev Power, and Iluka Resources’ David Robb.

South32 chief executive Graham Kerr is likely to join this group of high earners, judging by the terms of his new remuneration package.

More interesting are some of the other names that sit high on the list.

He now runs another budding iron ore company, Ascot Resources, which awarded Mr Kopejtka executive incentives that were valued in the company’s 2015 annual report at a whopping $4.7 million.

That’s an extraordinary number, especially as the collapse in Ascot’s share price over the past 16 months means the entire company is currently valued at less than $1 million.

Ascot’s response has been to seek a delisting of its shares from the ASX.

Whether those equity incentives, valued at $2.5 million, deliver real value to Mr Brand will depend on the company’s success developing LNG plants in the US.

A little-known entry in the list of high earners is Chong Soon Kong, who heads ASX-listed United Overseas Australia.

That was just above the cash bonus paid to Automotive Holdings Group managing director Bronte Howson.

For the 2015 financial year, he was paid a base salary of $1.1 million, an annual bonus of $1.2 million and total remuneration just under $3.2 million.

Peet lifted net profit to $38 million last financial year, and with a market capitalisation of $520 million, it is ranked as a top 20 Western Australian company.

Mr Gore has been well rewarded for his efforts, with a cash bonus of $968,000 and total remuneration of $3.2 million.

Only seven other Perth-based chief executives of ASX-listed companies (nine if we include Messers Harding and Wilson) had a higher total income.

Two successful mining companies stand as a point of contrast.

Northern Star Resources has undoubtedly been a WA success story over recent years, pursuing profitable growth through acquisitions and exploration.

Its market capitalisation has risen to $1.5 billion, making it WA’s eighth most valuable company.

Chief executive Bill Beament was given a big pay rise in July 2014, yet his base pay of $725,000 and total income of $1.2 million is modest relative to many others.

Independence Group is a similar story.

After buying Sirius Resources this year, the diversified miner is ranked as a top 10 WA company by market capitalisation.

Former Sirius managing director Mark Bennett has taken a different path this year. As part of the Sirius takeover, he carved out the exploration assets into new company S2 Resources, which pays him a modest annual salary of $350,000.

That change occurred a little more than a year after Sirius nearly doubled his pay to $785,000; however judging by his recent presentations at industry events, Mr Bennett couldn’t be happier. 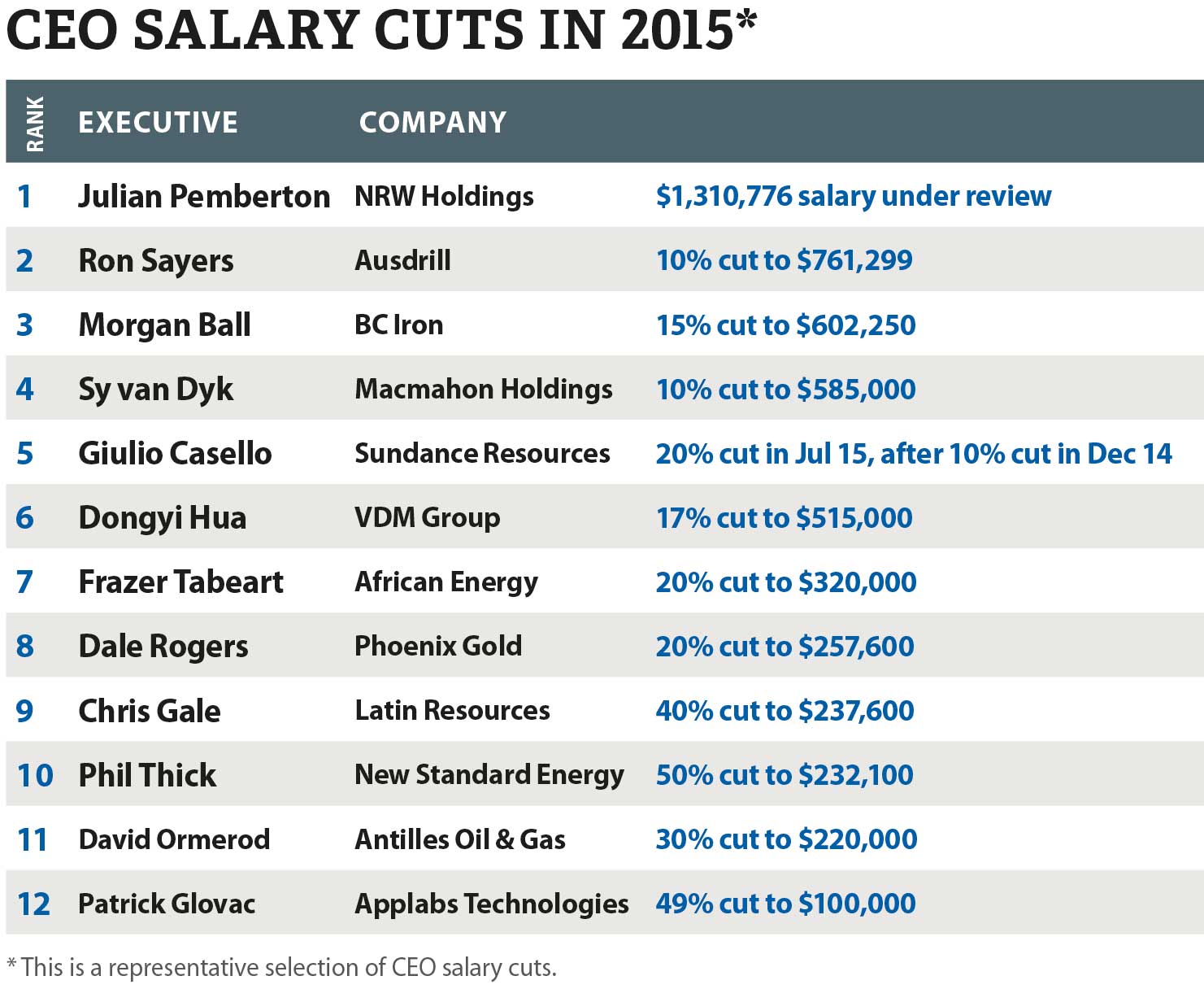 Many companies have responded to the tougher commercial environment by cutting executive salaries and directors’ fees.

The magnitude of the salary cuts is a rough guide to the scale of cost cutting at each company.

New Standard, for instance, has only two remaining staff after slashing costs in response to the collapse in oil prices.

Some companies have used the appointment of a new chief executive to reduce salaries.

Mining contractor Macmahon Holdings, for instance, had been paying Ross Carroll a base salary of $1.1 million.

It has subsequently appointed Sybrandt Van Dyk as his replacement, with a notional salary of $650,000.

However, as the company is on a temporary nine-day fortnight, his actual salary is $585,000.

Like many of its peers, mining and civil contractor NRW Holdings has slashed staffing and operating costs in response to the decline in mining construction activity.

But it was only last month at its annual meeting that the company said it was reviewing managing director Julian Pemberton’s remuneration.

With a base salary of $1.3 million, Mr Pemberton’s pay is conspicuously higher than peers Christopher Ellison at Mineral Resources and Rob Velletri at Monadelphous Group.

The reported, or statutory, remuneration of both those executives was distorted last year by the treatment of equity incentives and bonuses.

Mr Velletri’s take-home pay was just above $1 million, yet his statutory remuneration (based on current accounting standards) was about half that, at $515,000.

The difference arose because of a deduction the company made for the value of share options it had previously expected would vest.

Similarly, Mr Ellison’s take-home pay was about $1 million, but after adjusting for an annual bonus that he was awarded in 2014 but chose to repay, his statutory pay was $754,000.

For some chief executives, it works the other way around.

Peet pointed out that Mr Gore’s take-home pay was $2.6 million, compared with his statutory pay of $3.2 million.

Likewise for Fortescue’s Nev Power, whose take-home pay of $4.2 million was substantially lower than his statutory pay of $5.9 million.

The Australian Shareholders’ Association believes all companies should report both measures of remuneration, to help investors understand what amounts senior executives are actually paid.

Wesfarmers remuneration report explains there can be big differences between statutory pay and take-home pay, for instance because long-term equity incentives are valued at the time they are granted, which can be substantially different to their value if and when they vest to the executive.

If these are excluded, his actual or take-home pay would be $5.7 million.

Yet its standard practice is to report remuneration based on the requirements of accounting standards, which it says gives the advantage of being readily comparable with other companies.