Producers and explorers will be breathing a sigh of relief this week after the state government announced it would leave resources royalty rates unchanged in this year’s budget. 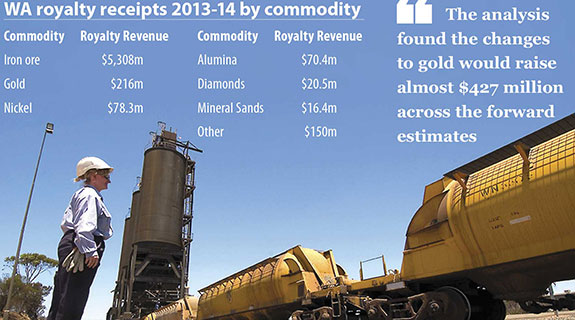 ON TRACK: The government has opted not to change royalties, for now.

Producers and explorers will be breathing a sigh of relief this week after the state government announced it would leave resources royalty rates unchanged in this year’s budget.

However, the state government’s review, the Mineral Royalty Rate Analysis, could yet shape policy in the years ahead.

The major recommendation to come out of this most recent review was the creation of a fourth tier of royalties, to be charged at 3.75 per cent, for products that undergo metallurgical processing but not final treatment.

The royalty tier system means the rate for commodities is determined based on the level of processing required before sale of the product, with current rates of 2.5 per cent, 5 per cent and 7.5 per cent.

Lithium carbonate would also be included in the new tier, while gold would move up from its current rate of 2.5 per cent.

Gold producers with production exceeding 2,500 ounces annually would also no longer be able to receive a concessional rate for that production.

The analysis found the changes to gold would raise almost $427 million across the forward estimates.

Changes were also recommended for diamonds, with the rate to be reduced from 7.5 per cent to 5 per cent, and coal, which should have a uniform rate of 7.5 per cent across all sales.

Broadly, however, Mines and Petroleum Minister Bill Marmion said the review was an endorsement of the system as it stood, with the current benchmark of a 10 per cent rate for untreated commodities to be retained across the board.

The report also warned that increases to royalties might be redistributed to other states under the Commonwealth Grants Commission allocation system, as Western Australia will have its revenue capacity assessed at the new, higher, rates.

The effect would hinge on the commission’s review of the distribution process to be released this year, but the report said that rates should still be set objectively, without regard to the effect on the GST distribution.