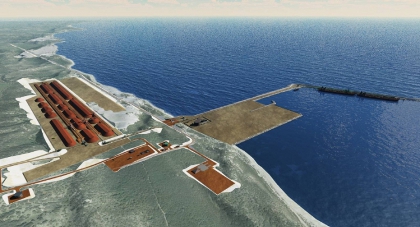 Supporters of the Oakajee Port & Rail project were insisting today the ambitious development was not dead, after its owner Mitsubishi cut spending and two thirds of its staff were abolished.

Mitsubishi’s decision followed its failure to conclude a Chinese joint venture deal, to help share the cost of the $10 billion-plus mine, rail and port development.

The Oakajee decision coincided with the Brian Gilbertson-chaired Jupiter Mines announcing it would freeze spending on its Mt Ida iron ore project in the Yilgarn, following a cost blow-out from the previously estimated $1.6 billion (see separate article).

Mitsubishi’s spending cuts are expected to result in 71 jobs being lost, though 44 staff will remain.

The main focus for remaining staff will be Mitsubishi's proposed Jack Hills iron ore mine, which was one of three mines meant to use the new port at Oakajee north of Geraldton.

The others were Sinosteel’s Weld Range project and Gindalbie Metal’s Karara mine, jointly owned by China’s Ansteel.

Karara recently started shipping out of the congested Geraldton port; Oakajee was designed to support the rapid expansion of iron ore mining in the Mid West region, but that future is nw under a cloud.

Mitsubishi and its former joint venture partner, local company Murchison Metals, have spent an estimated $700 million developing their plans for the Oakajee project.

The project also had financial and political support from the state government; premier Colin Barnett named Oakajee as his top priority soon after winning office some four years ago.

Mr Barnett said today that Mitsubishi’s decision was “a setback for the project and for WA”.

“Can I stress Mitsubishi has only put the project on hold, they have completed most of the feasibility work, so that’s now done.”

OPR chief executive John Langoulant characterised today's decision as a "slowing in the rate of expenditure" on the project".

He said the total cost of the port, rail and mine projects would be "north of $10 billion", and that it was a prudent step by Mitsubishi, which needs a joint venture partner before proceeding.

Mr Langoulant said it would be difficult to finalise a Chinese joint venture in the immediate future, in light of the political situaton in China, including the government leadership transition currently underway.

The changes include the merging of the offices of OPR and its mining arm Crosslands Resources, and the exit of Crosslands chief executive Andy Caruso; in future, Mr Langoulant will head both the infrastructure and mining arms.

Mr Langoulant said the company would continue to spend "tens of millions" of dollars on the project; this would include appointing a tier 1 engineering contractor in the New Year to work on Jack Hills.