Attorney General Michael Mischin said today he was disappointed at the federal government’s role in overturning state legislation designed to settle the long-running Bell Group dispute, as the amount of litigation around the matter once again escalates. 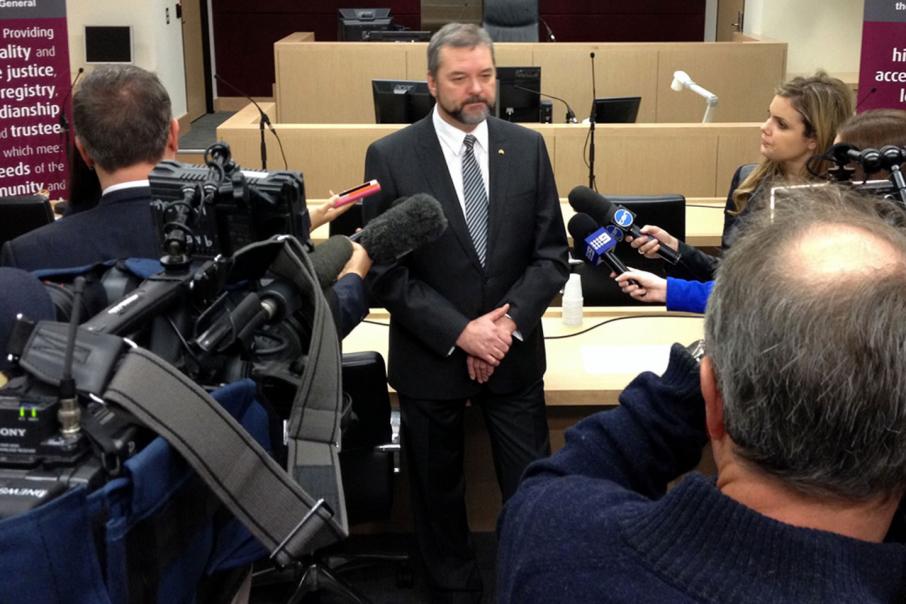 Attorney General Michael Mischin said today he was disappointed at the federal government’s role in overturning state legislation designed to settle the long-running Bell Group dispute, as the amount of litigation around the matter once again escalates.

Mr Mischin told reporters at parliament the state government’s scheme to settle the $1.7 billion dispute would have finally put the matter to rest after 20 years of legal battles, and he was disappointed with the way the Commonwealth had conducted itself.

“When it became apparent that the legislation would be challenged and there was a question of whether the Australian Tax Office would intervene, I did speak to Attorney General (George) Brandis with a view to persuading him against that course,” Mr Mischin said.

“He indicated to me that he was not inclined to intervene.

“Subsequently, a few days before the High Court hearing, I was informed that the Commonwealth would be intervening in order to challenge the legislation and to clarify elements of the operation of the corporations law that it was based on.’’

Mr Mischin said he sought meetings to see whether the legislation could be preserved while addressing the Commonwealth’s concerns, but that proved unsuccessful.

He also offered to negotiate a bigger payout to the tax office.

“The state was prepared to forego some of its share in order to address the ATO’s desires, but that proved unsuccessful,” Mr Mischin said.

Mr Mischin’s comments come seven months after the High Court overturned the state legislation, which supported the establishment of a special authority that would determine how $1.7 billion should be distributed to Bell Group creditors.

The scheme was contentious because it enabled the state to lift the payout to the Insurance Commission of WA over other creditors.

Mr Mischin said the introduction of the legislation had drawn some of the “litigation speculators” back into negotiations and made them more willing to reach agreement.

The collapse of the state scheme had led to more litigation.

“Further litigation is planned by them that is not to do with the merits of what they are after but simply to stall proceedings even longer,” he said.

“This has been very complex litigation, with lots of side issues that have been raised in courts all around the world, many of them trying to renege on agreements, or to qualify agreements, that have been entered into in the past.

“All it has become, is a lawyers’ picnic, with the need to resolve dozens if not hundreds of side issues and side actions, rather than focusing on a fair division of the money that was obtained from the banks.’’

The litigation under way includes Bell Group liquidator Tony Woodings taking action in the WA Supreme Court for the repayment of advances made by ‘indemnifying creditors’, and an award of two-thirds of the remaining money to those creditors.

This action is being taken under section 564 of the Corporations Act, which provides that creditors that fund litigation, and therefore assume risk, should be given an advantage over others.

The ‘indemnifying creditors’ are led by the Insurance Commission, which advanced almost $200 million to the Mr Woodings to fund the original legal action against a banking syndicate.

Bell Group NV advanced about $20 million and the Tax Office about $4 million.

Other creditors involved in legal action, including WA Glendinning, did not advance any funding.

The legal action currently under way has involved some parties disputing the jurisdiction of certain courts.

For instance, the Insurance Commission commenced an action in the WA Supreme Court to resolve 30 contested issues so funds can be distributed to creditors.

Bell Group NV challenged the application, claiming it should be pursued in the High Court.

The Insurance Commission then commenced a similar action in the High Court asking for the matter to be remitted back to the WA Supreme Court.

Bell Group NV opposed the move back to the WA Supreme Court as it preferred the WA Federal Court.

The High Court ordered that the proceeding be remitted to the Supreme Court, which was described by Chief Justice French as "its natural home".

Another line of action under which litigants have changed their mind revolves around Western Interstate, a financing company associated with Bell Group.

For 20 years, Bell Group NV and other creditors argued that Western Interstate was a creditor of Bell Group Finance.

Two different Supreme Court judges agreed with Bell Group NV, in 1996 and then in 2008.

However, in May 2016, Bell Group NV commenced action in the Federal Court in Perth seeking declarations that Western Interstate was not a creditor of BGF.

Bell Group was the flagship company of the late Robert Holmes a Court, but it came under the control of another prominent Perth entrepreneur, the late Alan Bond, after the 1987 stock market crash.

The legal action against the banks was started in 1995 by Bell Group liquidator Tony Woodings.

The banks put Bell Group into receivership in 1991 and subsequently recovered $265 million from asset sales, leaving nothing for other creditors.

The dispute with the banks was settled in 2014, leaving an amount of $1.7 billion (adjusted for inflation and interest) for distribution between the creditors.