Mirvac and Singapore’s Keppel REIT’s $280 million office tower at the Cathedral + Treasury Precinct has hit a key milestone, with the building reaching its highest point at 33 storeys. 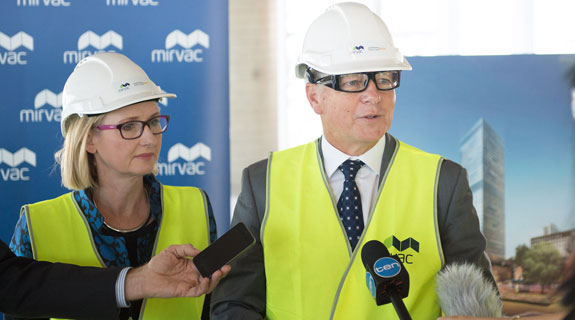 Mirvac Group and Singapore’s Keppel REIT’s $280 million office tower at the Cathedral + Treasury Precinct has hit a key milestone, with the building reaching its highest point at 33 storeys.

The 30,800 square metre building is to become the new home for the Supreme Court of Western Australia as well as the departments of the Attorney General and Treasury, under a 25-year sub-lease deal.

Fitout works will begin shortly, by the Department of Finance’s Building Management and Works division.

The building is expected to be complete by the middle of the year.

Designed by Kerry Hill Architects, the building is the largest currently under construction in the Perth CBD.

Mirvac chief executive Susan Lloyd-Hurwitz said the topping out was an important milestone for the project.

“This is a significant project for the city and a testament to the vision and commitment of the state government, the City of Perth and all the precinct partners, including the Anglican Diocese of Perth, the Public Trustee and FJM Property, to create a unique community precinct that honours the heritage of the site, respects the environment and enriches the city,” Ms Lloyd-Hurwitz said.

The project is part of the $700 million Cathedral + Treasury Precinct, which also includes a luxury hotel redevelopment of the Old Treasury Buildings, the City of Perth’s new library, and new offices for the Public Trustee and the State Administrative Tribunal.

The precinct also includes a public plaza, which will provide new retail and food and beverage facilities for not only the office workers to move into the tower, but also the general Perth public.

“This development will be a strategic landmark … becoming a vibrant hub for economy and talent,” Keppel REIT chief executive Ng Hsueh Ling said.

“I joined with the premier in October 2010 to announce the precinct project, after this area had stagnated for decades despite successive plans for its rejuvenation,” Mr Marmion said.

“Seeing the transformation today I am proud the Liberal National government brokered this outstanding redevelopment, realising its historical importance for future generations.”